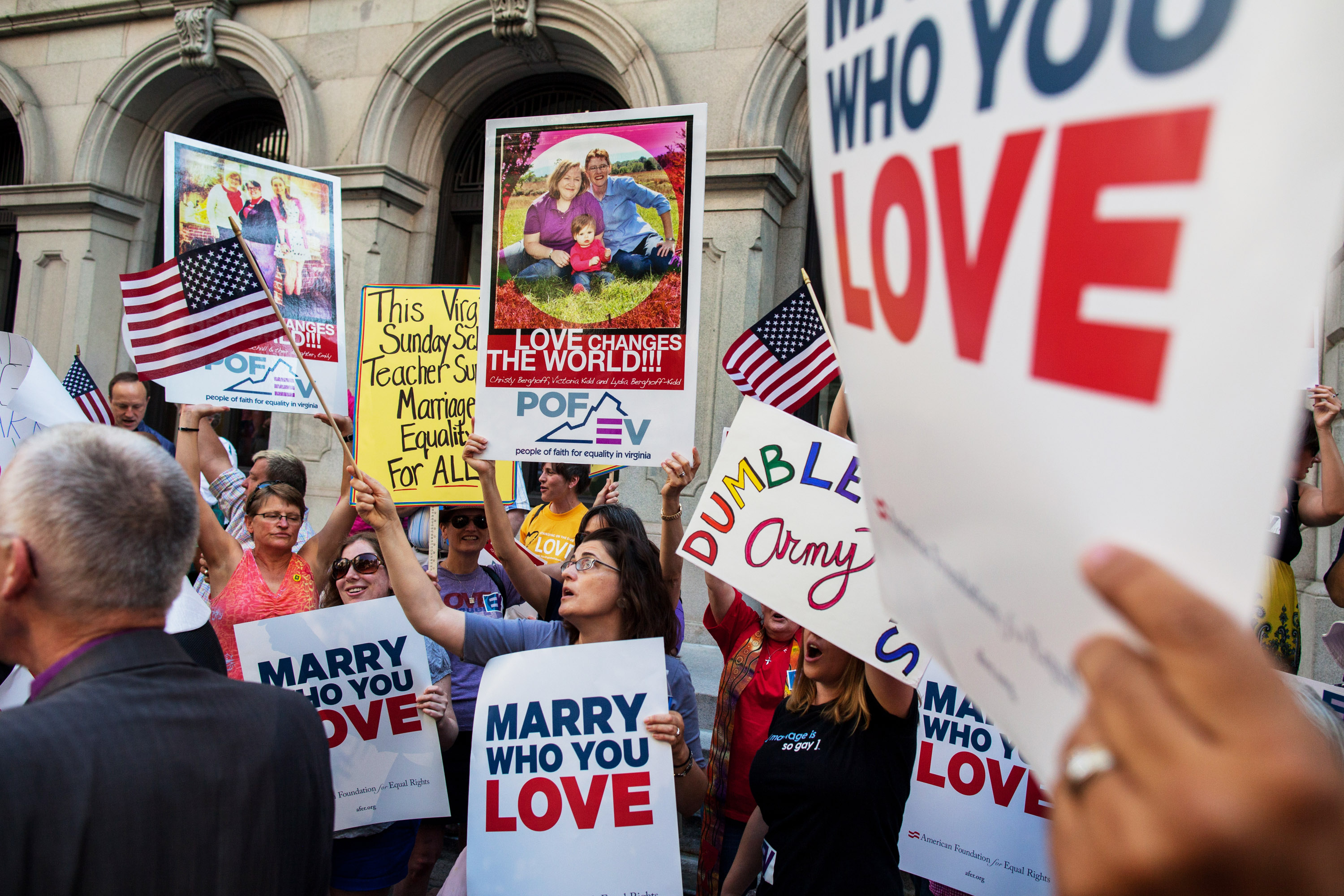 When the Supreme Court last year issued two major rulings regarding same-sex marriage, it sidestepped the fundamental question of whether same-sex couples have a constitutional right to marry. On Monday, the high court's nine justices considered whether to take up any one of seven marriage cases that would compel them to address that basic question.

Amid thousands of other cases, the court on Monday reviewed seven cases challenging state bans on same-sex marriage in Virginia, Indiana, Wisconsin, Utah and Oklahoma. The court could say as soon as this week whether it plans to take up any of the cases in its upcoming term, which starts next week.

Since the Supreme Court's 2013 rulings, the push for marriage equality has gained clear momentum. In large part because of the Supreme Court's decision to strike down part of the federal Defense of Marriage Act (DOMA), 40 state and federal courts in the past year have issued rulings in favor of same-sex marriage. Additionally, polls continue to show public acceptance of same-sex marriage.

If it were to take up one or more of these seven cases this term, "the Supreme Court would really be following the country rather than imposing some radical new change," Elizabeth Wydra, a constitutional expert and chief counsel of the Constitutional Accountability Center, told CBS News.

Even so, there's reason to believe the court could wait before it takes up a same-sex marriage case. The court has in the past waited for public sentiment and the legislative landscape to change before weighing in on controversial issues. Moreover, Supreme Court Justice Ruth Bader Ginsburg recently said that the question of same-sex marriage will come before the court "sooner or later" -- but perhaps not now.

At the University of Minnesota Law School earlier this month, Ginsburg pointed out that so far every federal courts of appeals ruling on same-sex marriage has come down the same way -- in favor of marriage equality. "When all the courts of appeals are in agreement there is no need for us to rush to step in," she said.

Typically, the Supreme Court is likely to take up a case when two or more federal courts of appeals have issued conflicting rulings. Ginsburg pointed out that there is a case pending in the Sixth Circuit Court of Appeals that could give the gay rights movement its first major setback on the issue of marriage. In August, a three-judge panel from the Sixth Circuit heard arguments over the same-sex marriage bans in Michigan, Kentucky, Ohio and Tennessee. Two of the three judges seemed inclined to uphold the bans.

"Now if that court should disagree with the others," Ginsburg said, "then there will be some urgency in the Court taking the case."

Gay rights advocates, for the most part, say the urgency is already there.

"Every day that we cannot have the freedom to marry and full respect across the country is a day that millions of people are really enduring a direct injury, indignity and injustice," Evan Wolfson, president of the group Freedom to Marry, told CBS News. "There's no reason to prolong that discrimination. The country is ready for the freedom to marry, and the case is there in front of the court. It's time to bring the country to national resolution."

Freedom to Marry this week began running an ad in several markets across the country to drive home the message that it's time for uniform rights for same-sex couples.

"One nation, indivisible - except if you're gay," a narrator says in the ad. "In 19 states, gay couples and their children share in the protections that only the freedom to marry provides. In the others, they are banned from marrying. They're taxed unfairly, denied Social Security and parenting rights, and can lose a family home when their loved one dies."

The court may be susceptible to that sort of public pressure, or it may want to let the public debate over marriage settle before it weighs in. Two years ago, Ginsburg suggested that the court "moved moved too far too fast" on another hot button issue -- abortion -- when it issued its landmark 1973 Roe v. Wade ruling.

Ari Ezra Waldman, an associate professor at New York Law School and LGBT advocate, argued "there is not going to be great harm to the marriage movement" if the court puts the seven marriage cases in question on the back burner. In the meantime, the movement can build up more public support and more lower court victories, he said, making it more likely the Supreme Court will come down on their side.

"It may be more beneficial to our movement in the long run if the court waits," he told CBS News. "I think we should trust the court's experience... to know when the country is ready, and when their decision is going to have the maximum impact."

The court has a history of trailing public sentiment amid cultural shifts. It wasn't until 1972 in Eisenstadt v. Baird that the Supreme Court ruled unmarried women had the right to access birth control -- 12 years after the FDA approved the birth control pill. And by the time the court issued its landmark Loving v. Virginia ruling in 1967, only 16 states still prohibited interracial marriage.

Some advocates, though, say that same-sex couples can't afford to keep waiting.

"The sooner the court can take up a case and decide this issue, the better off loving, committed couples across this nation will be," Sarah Warbelow, legal director for the Human Rights Campaign, told CBS News. "There's real harm that comes to couples when that marriage equality isn't available to them," she said, pointing to issues like parental rights.

U.S. says same-sex partners of U.N. staff will have to marry or leave
More
Stephanie Condon