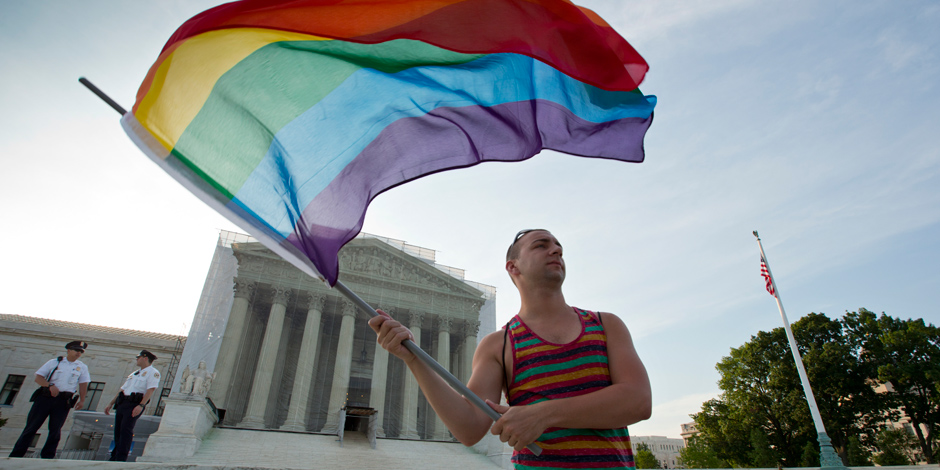 The gay rights movement saw a significant victory at the Supreme Court Wednesday, even as the court dodged the fundamental issue of whether marriage is a constitutionally-protected right for all couples, gay or straight.

In a 5-4 ruling in United States v. Windsor, the court struck down a provision of the 17-year-old Defense of Marriage Act (DOMA) that denies federal benefits -- like Social Security benefits or the ability to file joint tax returns -- to same-sex couples legally married.

"DOMA is unconstitutional as a deprivation of the liberty of the person protected by the Fifth Amendment," Justice Anthony Kennedy wrote for the majority. "The history of DOMA's enactment and its own text demonstrate that interference with the equal dignity of same-sex marriages, a dignity conferred by the States in the exercise of their sovereign power, was more than an incidental effect of the federal statute. It was its essence."

At the same time, the court ruled 5-4 that the defendants in the case of Hollingsworth v. Perry, which considered the constitutionality of California's same-sex marriage ban (called Proposition 8), have no standing in court. Supporters of Prop. 8 brought the case to the Supreme Court after a lower court struck down the law but California's governor and attorney general declined to defend it. By dismissing the case on procedural grounds, the court passed up the opportunity to issue a significant ruling on the issue of marriage.

"We have never before upheld the standing of a private party to defend the constitutionality of a state statute when state officials have chosen not to. We decline to do so for the first time here," Chief Justice John Roberts wrote for the majority, joined by Scalia, Ginsburg, Breyer and Kagan.

The practical impact of dismissing the Prop. 8 case is limited. It leaves the lower court ruling striking down Prop. 8 in place, applying statewide at best. However, the ruling may apply only to couples who directly challenged Prop. 8, or the counties in which they originally made those challenges. The lawyers who defended Prop. 8 said Wednesday that they are committed to seeing that Prop. 8 is enforced in the state.

"We are happy Prop. 8 remains the law of California," Austin Nimocks, senior counsel with Alliance Defending Freedom, said outside of the court.

The Ninth Circuit Court of Appeals, according the Associated Press, said it would give Prop. 8 supporters at least 25 days -- maybe more -- to ask the Supreme Court to rehear the case before lifting the stay on same-sex marriages that it imposed while Hollingsworth went through court. Gov. Jerry Brown, D-Calif., wants local officials to to start recognizing same-sex marriages, but he said that should happen only after the Ninth Circuit lifts its stay.

The impact of the DOMA case, by contrast, is clear. DOMA impacts around 1,100 federal laws, including veterans' benefits, family medical leave and tax laws. There are about 130,000 married same-sex couples in the United States today who up to this point were treated as unmarried as it pertained to those federal laws.

Edie Windsor, the 83-year-old lesbian who sued the United States government for discriminatory treatment under the Defense of Marriage Act (DOMA), said she felt "honored, humbled and overjoyed" after Wednesday's ruling came down.

Windsor sued the government because under DOMA, it did not recognize her marriage to her late partner, Thea Spyer. After living together in New York for more than four decades, Windsor and Spyer finally married in 2007, when Spyer became seriously ill. When Spyer died in 2009, she left Windsor her estate. Because DOMA didn't recognize their marriage -- even though the state of New York did -- the IRS hit Windsor with $363,053 in estate taxes.

Windsor's attorney Roberta Kaplan said that Windsor will get every cent of her money back -- with interest.

Even though the Prop. 8 case was dismissed, the two couples who initially challenged the law in court and their lawyers called both cases victories for gay rights.

Plaintiff Paul Katami, who challenged the law with his partner Jeff Zarillo, turned visibly emotional outside of the Supreme Court Wednesday. Choking up, he turned to Zarillo and said, "It's the day that I finally get to look at the man that I love and finally get to say, will you please marry me."

David Boies, one of the lawyers representing the plaintiffs, called Wednesday "a great day for America."

"Today the United States Supreme Court in two important decisions brings us that much closer to true equality," he said.

Monday's decisions represent the latest development in a dynamic and fast-moving national dialogue - largely taking place at the state level -- over gay rights, and same-sex marriage in particular. Just this year, Minnesota, Delaware and Rhode Island adopted laws recognizing same-sex marriages, bringing the number of states that do so to 12. At the same time, 35 other states have laws or constitutional amendments barring same-sex marriage.

The Supreme Court's first foray into the subject of same-sex marriage, while limited in impact, reflects the American public's growing acceptance of same-sex marriage. Just as the court is finally broaching the subject, a number of politicians at the federal level - both Democrats and Republicans - are taking a cue from the public and coming out in support of same-sex marriage. Even if the court had left DOMA completely intact, it would have almost surely faced a political challenge in Congress. The debate over the constitutional right to marriage, meanwhile, will continue at the state level for now.