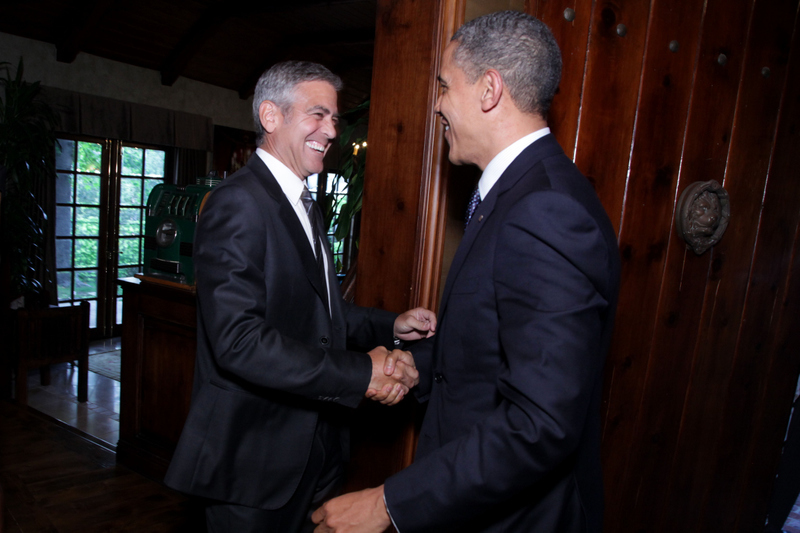 (CBS News) Convention season is heating up, and with it comes a host of celebrities throwing support behind both Democratic President Barack Obama and Republican presidential hopeful Mitt Romney. As more stars get political, the separation between celebrities and politics grows blurry.

"There used to be a pretty sharp distinction between Hollywood and Washington but that line has almost completely disappeared," Darrell West, director of governance studies at The Brookings Institution in Washington, told CBSNews.com. "You have celebrities who raise money and endorse candidates. You have politicians who appear on entertainment shows. And so there's a lot of interchange between Hollywood and national politics."

A lot of celebrity presidential endorsements have been coming in this time around. And there could be more to come, as both sides try to extend their appeal by drawing on the power of Hollywood, music, and practically everything in between.

Both Mr. Obama and Romney each have their fair share of celebrity backers.

Kid Rock showed his support for Romney by hosting a concert rally in Michigan earlier this year, and the Detroit singer's song "Born Free" seeped into the GOP campaign during Romney's vice president announcement.

In early August, Hollywood heavyweight Clint Eastwood announced his support of Romney "because I think the country needs a boost somewhere."

Mr. Obama has a lot of Hollywood behind him this election year. Actor George Clooney flexed his star power in May with a Los Angeles-based Obama fundraiser that included such guests as Tobey Maguire and Barbra Streisand. The event netted an estimated $15 million. Mr. Obama calls Clooney "a good friend."

West said he believes Hollywood entertainers are "much more influential on the Democratic side."

"In the case of athletes, these are young people who come into a lot of money in a short period of time," West explained. "They really hate high taxes on multimillionaires and that issue has driven them to the GOP side."

During convention time, the political and entertainment worlds get that much smaller.

"Typically conventions are a big time for celebrity appearances," said West, author of the book, "Celebrity Politics." "Each party wants to have its roster of celebrities...they hope to build on celebrities."

Actresses Jessica Alba and Eva Longoria have already been tapped to play a part in the DNC.

This year's RNC will feature performances from Lynyrd Skynyrd, The Oak Ridge Boys and country singer Lee Greenwood. Skynyrd isn't a stranger to the RNC, as the band played it in 2000 and again in 2004.

There will be plenty of other events, too, taking place in both convention cities. Musicians On Call has tapped Gavin DeGraw (Tampa) and Common (Charlotte) to headline its 2012 Presidential Convention Charity Benefit concerts.

"What strikes me about this year is how outspoken celebrities have been," West said. "People either love or hate President Obama, and we've seen inflated rhetoric surrounding this election. It used to be celebrities wouldn't want to take a strong political stance because they feared it would hurt their careers. But now celebrities are very outspoken and feel free to make the most polarizing comments. They don't seem to be fearful of negative political consequences."

Hank Williams Jr., for example, got very outspoken at an August concert in Iowa, telling the crowd he thinks Mr. Obama is an America-hating Muslim.

But not everyone takes sides.

Actor Jeff Bridges is getting political but is taking a non-partisan stance; he's set to attend both conventions.

"Well, I don't dig party lines, so I'm heading to both the Republican National Convention AND the Democratic National Convention to get people talking about an issue in our country that knows no party -- childhood hunger," Bridges wrote on his website. "I'll be at both conventions, meeting with leaders, appearing on behalf of No Kid Hungry, and telling officials of both parties that America's future depends on their supporting America's kids today."

And some celebrities are sitting this year out.

Bruce Springsteen publicly backed Democratic presidential candidate John Kerry in 2004 and four years later, the rocker voiced his support of Mr. Obama. "I have now seen and heard enough to know where I stand," Springsteen wrote on his website about the president in 2008.

Springsteen says he still supports Mr. Obama but that this year he's taking a back seat, noting he's not "a professional campaigner."

"I never campaigned for politicians previous to John Kerry and at that moment it was such a blatant disaster occurring at the top of government, you felt that if you had any cachet whatsoever, you had to cash it in because you couldn't sit around and watch it," Springsteen said in February at a press conference in Paris, reports AFP.

"I prefer to stay on the sidelines," he added. "I genuinely believe an artist [is] supposed to be the canary in the coal mine, and you're better off with a certain distance from the seat of power."

Still, that doesn't mean Springsteen is completely steering clear of politics. His song, "We Take Care of Our Own," appeared on the official Obama playlist for campaign rallies this election.

With all of the star-fueled excitement surrounding election season, it's still difficult to determine if celebrities have the potential to affect ballots come Election Day, as studies suggest mixed results.

"It's hard to know whether celebrities actually influence the vote," West said. "Voters like to think that they are independent and not influenced by Hollywood celebrities but yet people do pay attention to what's in the news and the line between celebrities and politics has virtually disappeared."

Tell us: How do you feel about celebrities' presidential endorsements?