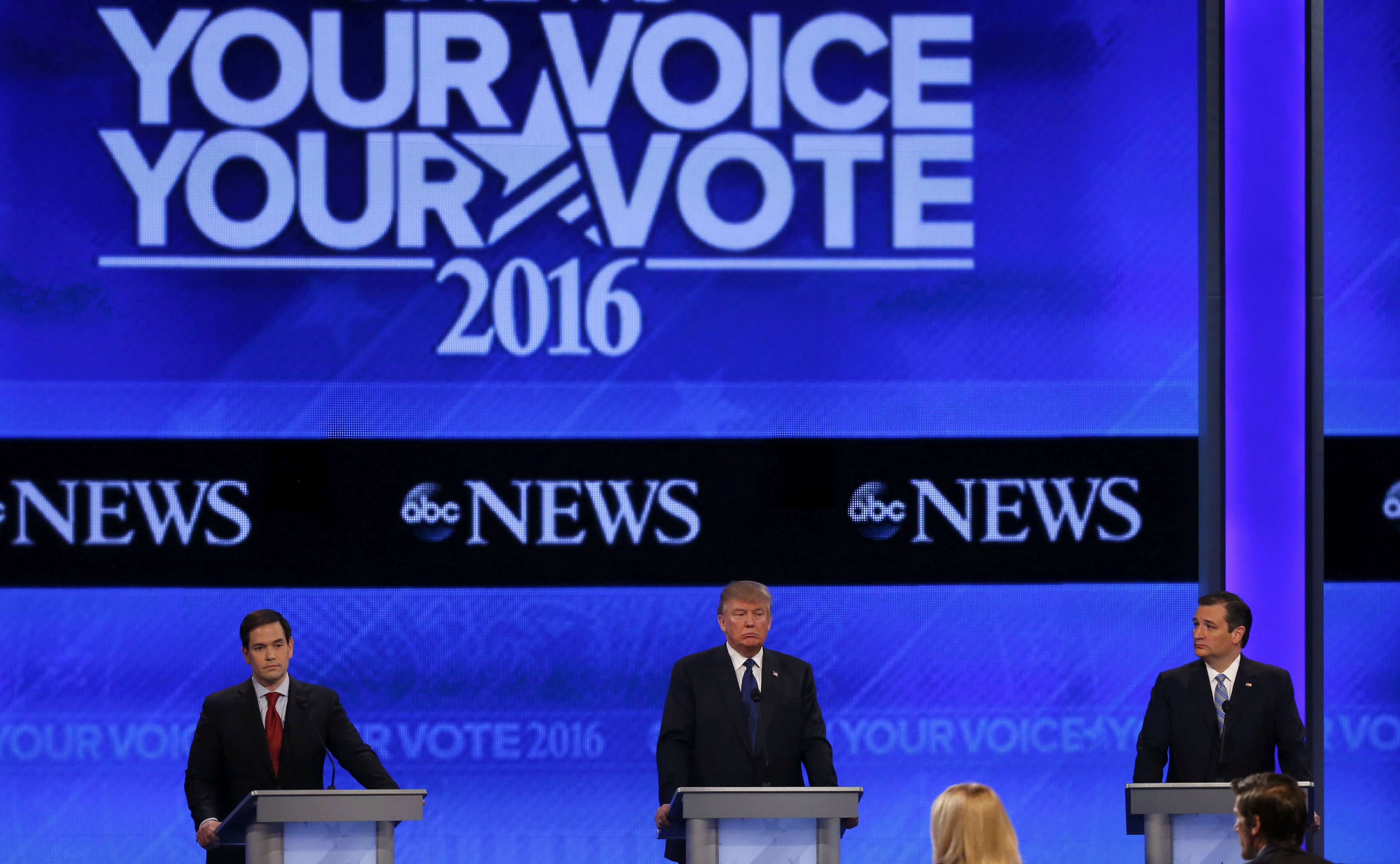 With the New Hampshire primary two days away, the top three finishers in the Iowa Republican caucuses - Texas Sen. Ted Cruz, businessman Donald Trump and Florida Sen. Marco Rubio - are looking to sustain their momentum with a strong finish in the Granite State.

But the two states, while both heavy on white voters, still have markedly different electorates. Iowa's GOP electorate is distinguished by its significant numbers of evangelical Christian voters, while New Hampshire has far more independents who can vote in either primary.

"Typically a lot of New Hampshire voters are late deciders ,and it's an awfully complicated decision on the Republican side this time," Dante Scala, a political science professor at the University of New Hampshire, told CBS News. "So many competing candidates...are quite similar in terms of their policy positions."

Just 49 percent of likely voters in the Monmouth poll said they were completely decided on a candidate, and a full 31 percent said they had a strong preference but were open to considering other candidates. Twelve percent expressed only a slight preference. Nearly one in 10 voters are still truly undecided.

Though their success in Iowa gives them some momentum, all three of the top candidates coming out of Iowa are competing with current and former governors who have been camped out in the state for months. Since the beginning of the year, Cruz has been in New Hampshire 30 days, Rubio 33 days and Trump 23 days. By contrast, Gov. John Kasich of Ohio and Chris Christie of New Jersey have spent 60 days in the state and former Florida Gov. Jeb Bush has spent more than 50.

Here's a look at the stakes of the race for each of the top three Iowa finishers.

The polls leading up to the Iowa caucus suggested that Trump would be able to pull out a one-two punch with Iowa and New Hampshire. Instead, he barely managed to hang on to second place and the results spelled trouble for his ability to turn out voters who came to hear him speak.

His ground game is no better in New Hampshire, where reporting by CBS News Digital Political Journalist Jacqueline Alemany showed just weeks before the primary that Trump's campaign lacks a coherent voter strategy and the kind of voter targeting that has become commonplace in modern politics. Plus, many of the people packing his rallies come from New Hampshire's neighboring states - Maine Massachusetts, Connecticut and Rhode Island.

As an example, New Hampshire-based GOP operative Dave Carney told CBS News that over the course of several days last week, his household received six different calls from Trump volunteers calling to find out who they are supporting in the primary. It sounds like a big number - but Carney, who is unaffiliated with any of the campaigns, said it actually shows a "complete lack of any sort of sophistication."

A household should be identified by the campaign just once and then either taken off of call lists or called only to persuade them to support a candidate.

"That's really weak, they should be starting to turn people out so I would say they have no ground game in a serious sense," Carney said.

Still, he said it would be a "remarkable achievement" for Cruz or Rubio to beat Trump outright because his lead has been so consistently high for weeks. The more worrisome scenario for Trump would be a closer, single-digit victory. That, Carney said, "would certainly lead to some real introspection" about his status as a juggernaut candidate.

Scala said Trump benefits most from the fact that he is drawing a very different kind of voter than Rubio, Christie, Kasich or Bush, which means less competition for him in the voting booth. Plus, Scala added, Trump's vote seems like the most solid.

"He has the most people who say 'I've decided' and the question will be do they turn out to vote," he said.

Trump himself seems unconcerned about lacking strong organization in the state.

"I feel fine," he told reporters at his lone New Hampshire office last week. "We have what we have. People like us. we seem to be doing very well." And Trump pointed out a major difference between Iowa and New Hampshire that could work in his favor: "Here it's a little less about ground game, it's like, you go out you vote. Here you go out, you pull a trigger and come back. You don't sit around for an hour and a half."

Cruz's substantial victory in Iowa was a testament to the strength of his sophisticated data program that has targeted potential supporters. He also provides housing to out-of-state volunteers who come to help the campaign by knocking on doors and phone banking. They make targeted pitches to voters.

Of the top three Iowa finishers, Carney said, "Cruz has the best operation, but he just hasn't invested the time and effort here, like Christie and Bush and Kasich have."

On the other hand, Carney noted, Cruz's biggest potential competitors - ultra-conservative candidates like Louisiana Gov. Bobby Jindal, Wisconsin Gov. Scott Walker, former Texas Gov. Rick Perry and former Pennsylvanian Sen. Rick Santorum - have all dropped out of the 2016 race. He's got no competition for that vote, whereas Rubio, Bush, Kasich and Christie are all competing for voters more friendly to an establishment candidate.

There's a ceiling for these voters in New Hampshire, though.

"I have a hard time seeing him appealing to anyone outside of the very conservative voters and I don't think he did anything [during Saturday's Republican debate] to help with that regard," said Scala. "To me, he winds up somewhere within the vicinity of 15 percent."

"I don't think Cruz every had a lot invested in success in New Hampshire," Scala added. New Hampshire, he points out, "is just not an electorate that was built for him." Bloomberg Politics reported that Cruz did not plan to increase his resources in New Hampshire, saving instead for states like South Carolina, among others.

His best bet at a high finish in the state may rely on picking up now-orphaned supporters of Sen. Rand Paul, R-Kentucky, who dropped out of the race after Iowa.

During an event last week just hours after Paul dropped out of the race, a man who said he had driven up from Maryland and was supporting Rand Paul asked Cruz a question during a town hall in Goffstown, New Hampshire. He said that he and fellow members of the "liberty movement" are now candidate shopping.

"Can we trust you?" the man asked.

"Rand, number one, is a friend. Rand is someone I have worked side by side with in the Senate repeatedly. Indeed Rand came to Texas and campaigned with me helping me get elected to the Senate," Cruz said. "Let me say to you and everyone in the liberty movement who was with Rand that I very much hope that I can earn your support."

Another woman who said she was also shopping for a new candidate after Paul left told Cruz she found him intellectually attractive.

"I want somebody who will defend the entire Constitution," she said. "The Constitution requires a vote before we go to war."

Rubio's strong third-place finish in Iowa put a target on his back, and primary day will determine how effective his opponents' slings and arrows were. Perhaps the worst blow came during Saturday's GOP debate, when Rubio repeated the exact same talking point three times in a five-minute span in the face of Christie's attacks.

Rubio said he is fine.

"We raised more money last night in the first hour that debate than any other debate. As far as that message, I hope they keep running it and I'm going to keep saying it because it's true," he said on ABC's "This Week."

His supporters in New Hampshire aren't as sure.

"I'm disappointed in how he handled it," Rick Brown of Londonderry, New Hampshire, told CBS News. "He's so immaculate, his presentations, how he's handled himself in these debates...he had to know that was coming."

Brown said it "could be" enough to convince him to look at another candidate even though he had identified as a Rubio supporter.

Rubio's ground game appears to be less developed than some of his rivals. His staff in New Hampshire is thin, and he wasn't able to recruit any of the top staffers in the state. The campaign only brought on a New Hampshire press secretary at the beginning of the year, and it's not as common to see his campaign literature during canvassing sessions with volunteers from other campaigns.

"I think he is going to be the one guy who is really going to kick himself in the ass on Wednesday that they did not invest more time and effort in New Hampshire," Carney said. "Their momentum out of Iowa and all the national grinding of teeth and the establishment's handwringing...that could help him -- he just doesn't have the infrastructure in place to really leverage that into a serious effort."

Rubio's campaign had planned a "3-2-1" path to the nomination, according to reports from the conservative-leaning National Review. That's third place in Iowa -- which he secured -- second place in New Hampshire, and first place in South Carolina in that state's Feb. 20 primary.

If one of the other establishment candidates like Kasich or Bush takes second place, Scala said, "it's not such a three-way story anymore" between Trump, Cruz and Rubio.

"Rubio needs to use New Hampshire to finish off Kasich, finish off Christie, and then if Bush didn't do well, hope that party elites would counsel Bush to get out of the way. That's what a second place would have done for him," Scala said. "But if he's not doing that, the field stays crowded" and it becomes much more difficult for him to consolidate the party's establishment voters who don't like Trump or Cruz.

And if his robotic debate performance really does hurt him with the electorate and creates an opening for two of his establishment rivals, the situation could get even worse.

"If Rubio's finishing behind not one but two establishment candidates that's a real dilemma going to South Carolina," Scala said. "You've got a splintered field."