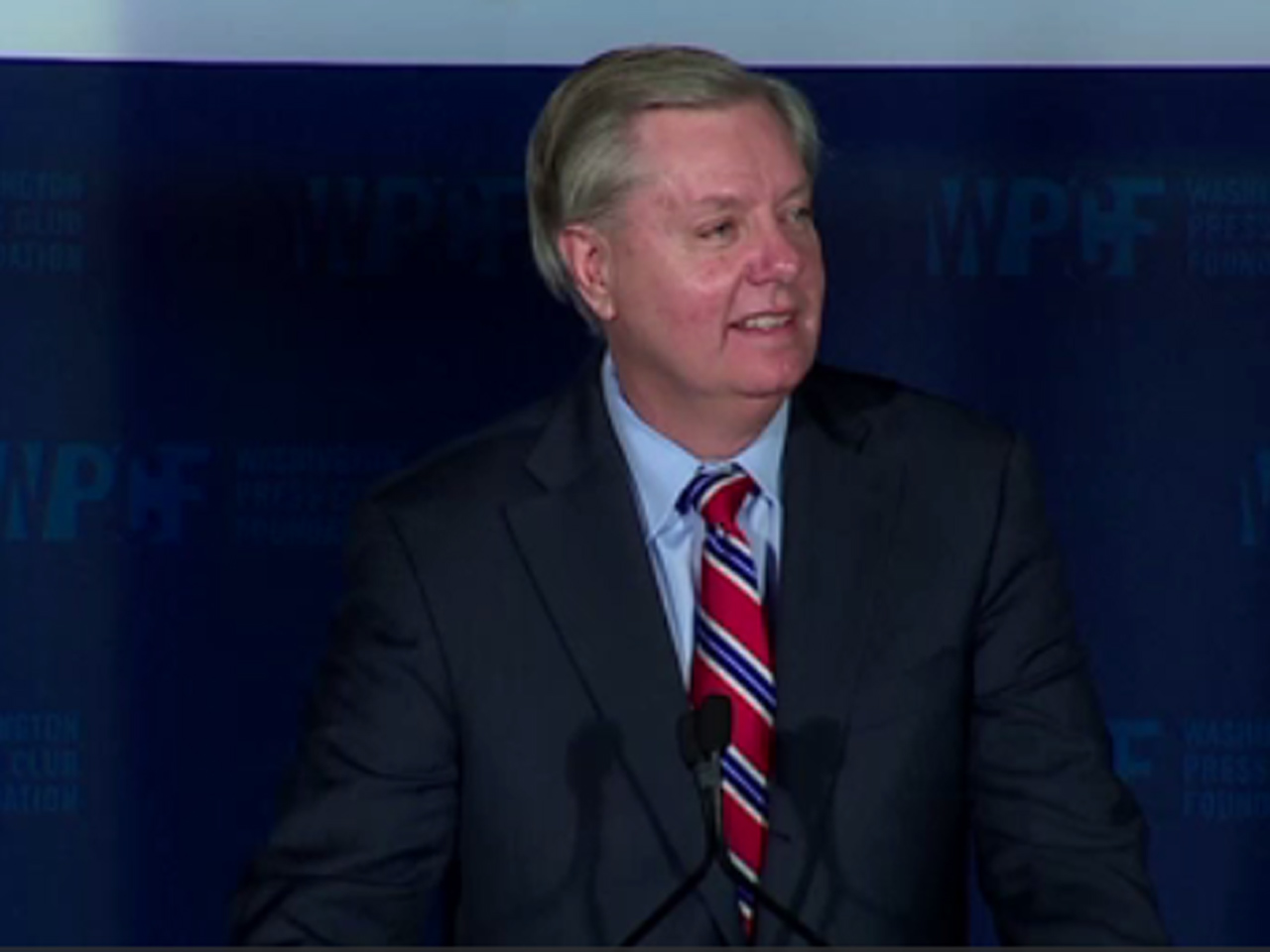 Lindsey Graham may have dropped out of the race for the Republican nomination for president, but the South Carolina senator didn't hold back Thursday night at the Washington Press Club Foundation's annual dinner when talking about some of those remaining in the field.

Graham, who endorsed Jeb Bush after ending his own bid, only to see Bush give up his campaign as well, took no prisoners in his remarks about the current state of presidential politics, even as the GOP was holding its tenth debate of the primary season.

The D.C. dinner's speeches are usually lighthearted and, under some guise of humor, Graham roasted Hillary Clinton and his fellow Republicans, saying to laughter, "The most dishonest person in America is a woman who is about to be president. How could that be? My party has gone bats*** crazy."

Graham added, "All I can tell you is that if we don't win this election, when are we ever going to win one? That's not meant to be funny. A good Republican would defend Ted Cruz after tonight. That ain't happening. If you killed Ted Cruz on the floor of the Senate, and the trial was in the Senate, nobody could convict you." That crack also drew laughs. It referred to front-runner Donald Trump's consistent charges that no one in Washington likes Cruz.

At one point, Graham mentioned his and Bush's failed campaigns and called himself the "Doctor Kervorkian" of the race. Then, he paused -- and put on this cap -- with Trump's campaign theme on it:

Turning to Marco Rubio, Graham was dripping with sarcasm when he said, "Then there is Marco, the boy wonder. I'm not saying he would change his position -- but he changes his position. The Secret Service main job when he's president is to keep him hydrated." That conjured up Rubio being caught on camera grabbing a quick sip of water while delivering the GOP response to President Obama's 2013 State of the Union address.

Graham had more in store for Cruz, again using a common Trump charge -- that Cruz being born in Canada and not the U.S. renders him ineligible to be president. "I know exactly when Ted is going to drop out of the race -- that's Canadian week at Myrtle Beach (South Carolina), when all of our Canadian friends get 10 percent off. But I will say our Canadian is better than your (Democrats') Kenyan -- well, at least Canada is closer to America then Kenya; it's a step in the right direction." That line involved frequent past allegations from Trump and others that Barack Obama was actually born in Kenya and so isn't a legitimate president.

Graham continued, "I know I'm supposed to be funny, but I'm not really happy about where the country is right now - I could make a million Donald Trump jokes, and I have, but our party and our country is going to have to up its game - you're going to have to ask him hard questions, and I don't mean to turn a funny thing into a serious thing -- but anytime Mitt Romney thinks you should turn over your taxes, we've probably given him (Trump) a pass." Romney, under fire from Democrats to release his tax returns when he was the 2012 Republican standard-bearer, has been challenging fellow billionaire Trump to make his returns public.