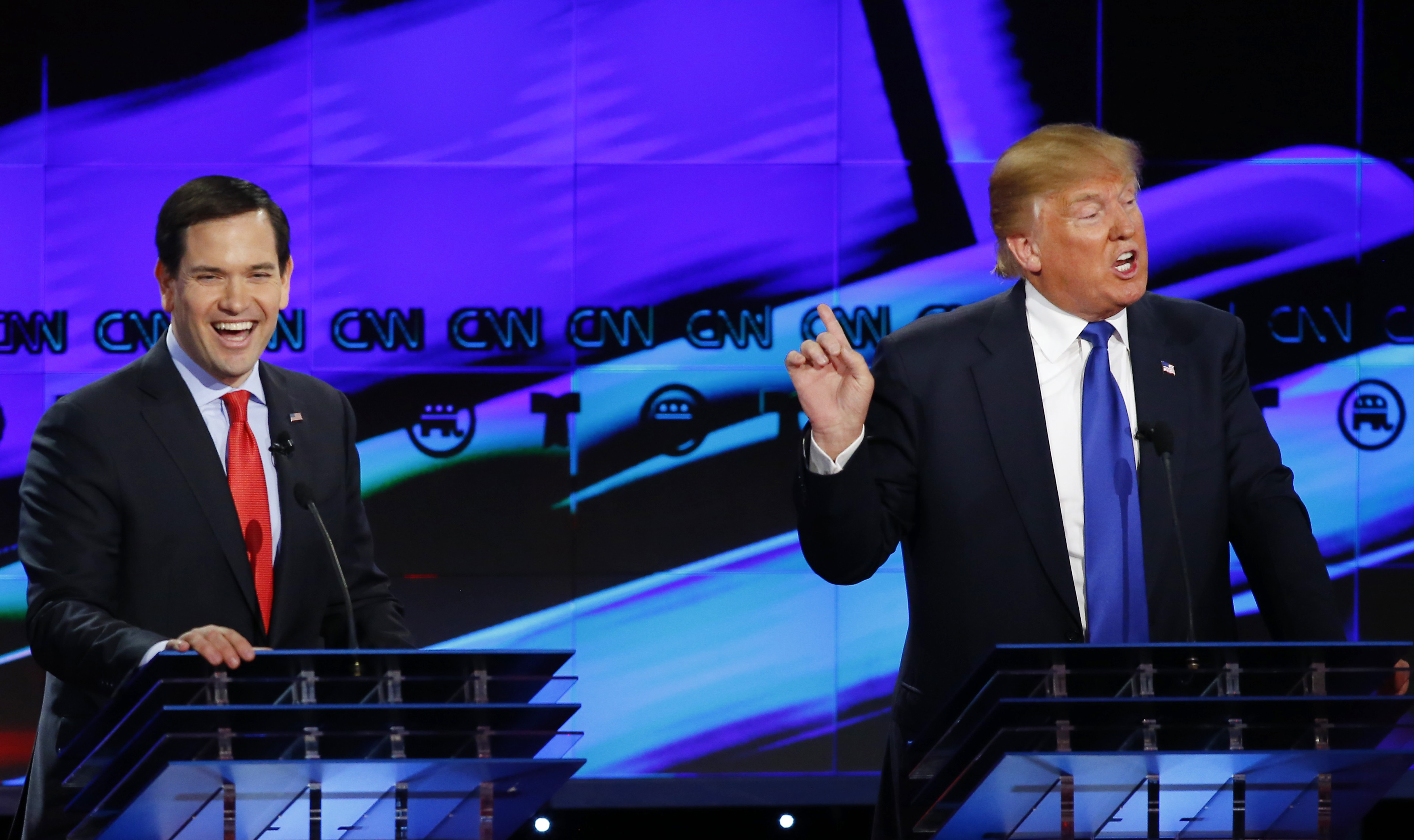 Armed with the opposition research that's been lacking in the previous nine debates, Marco Rubio in Thursday night's debate came ready to take the strongest swings he could muster at Republican front-runner Donald Trump.

Rubio attacked Trump from every angle, charging that he's a fraudulent businessman who hires illegal immigrants. He slammed the businessman's limited plan for replacing Obamacare. And he questioned the front-runner's wisdom on foreign policy matters.

On top of all that, the Florida senator came ready to deliver the sort of cutting, personal insults that rile up a crowd -- the kind of attacks that Trump is more accustomed to dishing out himself.

Rubio wasn't left to take on the GOP front runner on his own. Rubio and Sen. Ted Cruz more than once teamed up to attack Trump during the CNN debate, even though the two are effectively competing with each other to emerge as Trump's strongest rival. Their interest in taking down the front runner is clear: Both candidates must claim victories in their respective home states (Florida and Texas), or else their campaigns will no longer seem viable.

However, it's unclear how much damage Rubio and Cruz can do to Trump before those quickly-approaching primaries. The bombastic businessman so far endured most attacks against him without so much as a scratch. Meanwhile, Trump himself continues to test the loyalty of his primary supporters by making assertions -- on hot-button issues like Planned Parenthood and support for Israel -- that no other Republican could seemingly get away with.

On the issue of the Middle East, Trump asserted, "I have very close ties to Israel." However, he added that as a world leader, he'd try to stay neutral in the negotiations between Israel and Palestine.

"There's nothing that I would rather do to bring peace to Israel and its neighbors generally. And I think it serves no purpose to say that you have a good guy and a bad guy," he said.

Trump's opponents balked at this. "You cannot be an honest broker in a dispute between two sides in which one of the sides is constantly acting in bad faith," Rubio declared, slamming Palestinians for promoting terrorist tactics.

If Trump can get away with policy positions that completely stray from GOP orthodoxy, it is because -- as he explained Thursday night -- "we are building a new Republican Party."

Trump made that assertion as he defended his standing with Latino voters. When confronted with polling that shows he is overwhelmingly unpopular with Latinos, Trump pointed to his across-the-board success in the primaries so far.

"I won with women," he said. "I won with men, I won with high-income, low-income, I won with Hispanics... But one thing I'm also going to do, I'm going to be bringing a lot of people in who are Democrats, who are independents, and you're seeing that with the polls... New people are coming into the Republican Party."

Trump has, in fact, managed to win over a broad coalition of voters with his appeal as a Washington outsider who understands business. He's done that while sustaining his image as a conservative by taking a hardline approach on issues like immigration. Yet on Thursday night, Rubio managed to undercut both his record as a businessman and his approach to immigration.

"Even today, we saw a report in one of the newspapers that Donald, you've hired a significant number of people from other countries to take jobs that Americans could have filled," Rubio said. "My mom and dad -- my mom was a maid at a hotel, and instead of hiring an American like her, you have brought in over a thousand people from all over the world to fill those jobs instead."

Pointing to a case in which Trump was sued for bringing in workers from Poland, Rubio charged, "You're only person on this stage that has ever been fined for hiring people to work on your projects illegally."

Rubio and Cruz also slammed Trump for the civil suit against him regarding Trump University, which Rubio called a "fake school."

The Florida senator also aggressively challenged Trump on substantive policy questions, such as how to replace Obamacare. He backed Trump into a corner, getting the businessman to admit there's only one element to his health care plan: Let insurance companies sell policies across state lines.

"So, that's the only part of the plan? Just the lines?" he challenged. By comparison, Rubio described a plan to get Americans covered through a combination of employer-provided insurance plans, health savings accounts and refundable tax credits for health care.

And in a bold move, Rubio used the debate tactic that Chris Christie had destroyed him with -- about repeating canned lines -- and laid a similar trap for Trump when the billionaire struggled to give specifics about his health care plan.

Rubio pounced. "Now he's repeating himself," he said, mocking Trump, who objected, "No, no, no." Rubio laughed and gestured at him, as the audience laughed with him and applauded.

While Rubio and Cruz teamed up against Trump, Kasich continued to stress his executive experience. The Ohio governor took the opportunity to highlight this experience when addressing the current dispute between the FBI and Apple over access one of the San Bernardino attacker's phones.

"The problem is not right now between the administration and Apple. You know what the problem is? Where's the president been?" he said. "You sit down in a back room and you sit down with the parties and you get this worked out. You don't litigate this on the front page of the New York Times... The president of the United States should be convening a meeting, should have convened a meeting with Apple and our security forces."

"That's why you want a governor," Kasich continued. "I do this all the time. And we reach agreements all the time. Because as an executive, you've got to solve problems instead of fighting on the front page of the newspaper."

Ben Carson, meanwhile, asked voters to support his campaign to "revive America," but he said little that would revive his flailing candidacy. Carson gave some rambling responses to questions, such as how he would select a Supreme Court nominee.

"I would go through and I would look at what a person's life has been. What have they done in the past? What kind of judgments have they made? What kind of associations do they have? That will tell you a lot more than an interview will tell you," he said. "The fruit salad of their life is what I will look at."