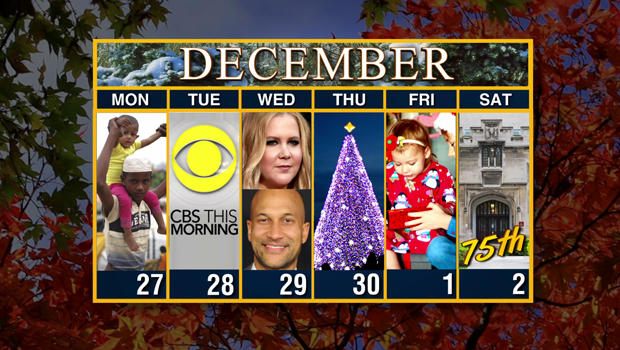 On Monday, Pope Francis begins a trip to Myanmar (formerly Burma), where he's expected to focus on the plight of the Muslim Rohingya minority at the hands of the Buddhist majority.

Tuesday brings the announcement of the latest Grammy nominees in four top categories, on "CBS This Morning."

Thursday sees the lighting of the National Christmas Tree outside the White House.

Friday's the start of Safe Toys and Gifts Month, encouraging everyone to choose presents that don't pose a risk to children's eyesight.

And Saturday marks the 75th anniversary of the world's first nuclear chain reaction at the University of Chicago.