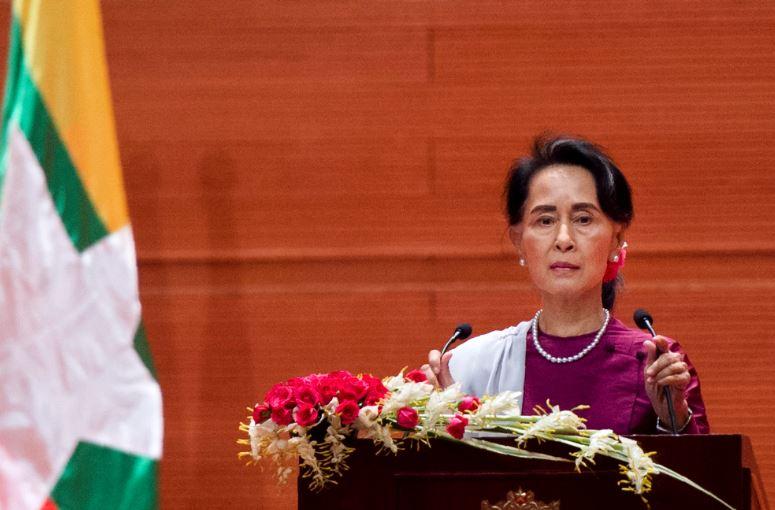 NAYPYITAW, Myanmar -- With a mass exodus of Rohingya Muslims sparking accusations of ethnic cleansing from the United Nations and others, Myanmar leader Aung San Suu Kyi on Tuesday said her country does not fear international scrutiny and invited diplomats to see some areas for themselves.

Though an estimated 421,000 Rohingya have fled to Bangladesh in less than a month as their villages burned and hundreds were killed, Suu Kyi said the "great majority" of Muslims within the conflict zone stayed and that "more than 50 percent of their villages were intact."

The Nobel Peace laureate's global image has been damaged by violence since Rohingya insurgents attacked Myanmar security forces on Aug. 25. Rohingya fled their villages in the military crackdown that followed, and many of their villages have been burned. The government has blamed the Rohingya themselves, but members of the persecuted minority have said soldiers and Buddhist mobs attacked them.

Suui Kyi's first address to the nation since the violence erupted came days after she canceled plans to attend the U.N. General Assembly, a decision widely seen as a response to international criticism.

Suu Kyi said anyone found to have broken the law would be punished. "Human rights violations and all other acts that impair stability and harmony and undermine the rule of law will be addressed in accordance with strict laws and justice," she said.

The Rohingya, who live mainly in northern Rakhine state near the Bangladesh border, have had a long and troubled history in this predominantly Buddhist nation of 60 million.

Though members of the long-persecuted religious minority first arrived in the western state of Rakhine generations ago, most people in Myanmar consider them to have migrated illegally from Bangladesh. Denied citizenship, they are effectively stateless. They cannot travel freely, practice their religion, or work as teachers or doctors, and they have little access to medical care, food or education.

The attacks on Rohingya villages in the last month appear to many to have been a systematic effort to drive them out. U.N. Secretary General Antonio Guterres has described it as ethnic cleansing.

Suu Kyi sought to assure foreign diplomats gathered for her speech in Naypyitaw, the capital, that those who fled to Bangladesh would be allowed to return if they passed a "verification" process. She also said the government was working to restore normalcy in the area.

"Nevertheless we are concerned to hear that numbers of Muslims are fleeing across the border to Bangladesh," she said. "We want to understand why this exodus is happening. We would like to talk to those who have fled as well as those who have stayed."

She said she it would be helpful to understand why conflict did not break out everywhere. She invited the diplomats with visit villages that weren't affected so they could learn along with the government "why are they not at each other's throats in these particular areas."

BBC News correspondent Jonah Fischer, reporting from Bangladesh on Tuesday for "CBS This Morning," said the Rohinya refugees who have sought shelter there have told journalists they were forced to flee because of an offensive by Myanmar's military. They have spoken of atrocities committed by soldiers.

Fischer said there were two ways of looking at Suu Kyi's remarks on the crisis; either she is genuinely out of touch and not getting good information from Rakhine state in the capital, or she's being wilfully blind to the alleged abuses of her country's military, possibly because it is too difficult for her politically to say anything that might be seen as critical of the military.

Suu Kyi shares power with the military in Myanmar, which is also sometimes referred to as Burma, in a very delicate balance between the civilian government and the army, notes Fischer, and she doesn't want to say anything that might jeopardize that fragile relationship.

Rohingya now in camps in Bangladesh were angered by the implication that Rohingya who were driven from their villages were themselves responsible, or that some members of the ethnic group are safe.

In the Kutupalong refugee camp, Abdul Hafiz said Rohingya once trusted Suu Kyi more than the military that not only ruled for half a century before, but also held her under house arrest for many years. Now Hafiz calls Suu Kyi a "liar" and says Rohingya are suffering more than ever.

He said Suu Kyi should give international journalists more access to their destroyed villages. If Rohingya are proven wrong that they were attacked, he said, "we will not mind if the world decides to kill us all by pushing us into the sea."

Some observers who attended the speech said it was progress for Suu Kyi to invite diplomats to at least some Rohingya villages.

"Today's welcoming of the international community to travel to Rakhine and see for ourselves what the situation is, I think that is a positive statement," said Andrew Kirkwood of the United Nations' Office for Project Services.

Russian and Chinese diplomats praised the speech. "The message is quite clear that Myanmar is ready to cooperate with the international community," said the Russian ambassador to Myanmar, Dr. Nikolay Listopadov.

The head of a team of U.N. human rights investigators said Tuesday that Suu Kyi's comments "bode well" for its so-far unsuccessful efforts to gain access to the country now facing an exodus of Rohingya Muslims to neighboring Bangladesh.

Marzuki Darusman decried stepped-up violence in Myanmar and asked the U.N.-backed Human Rights Council for a six-month extension until next September for his team's first written report.

Addressing the council, Darusman cited two main points from Suu Kyi's speech: The "categorical readiness" of Myanmar's government to accept returnees once procedures are worked out, and its readiness to be "globally scrutinized by the international community."

"There is overwhelming evidence that security forces are engaged in a campaign of ethnic cleansing," Gomez said. "While it was positive to hear Aung San Suu Kyi condemn human rights violations in Rakhine state, she is still silent about the role of the security forces in this."

The exodus continues to grow. The U.N.'s migration agency on Tuesday raised its estimate of the number of refugees in Bangladesh to 421,000, and UNICEF says more than a quarter-million of those are children. Hundreds of thousands more Rohingya were already in Bangladesh from waves of violence years earlier.

Spokesman Joel Millman of the International Organization for Migration says an estimated 20,000 people are flowing across Myanmar's border into Bangladesh every day.