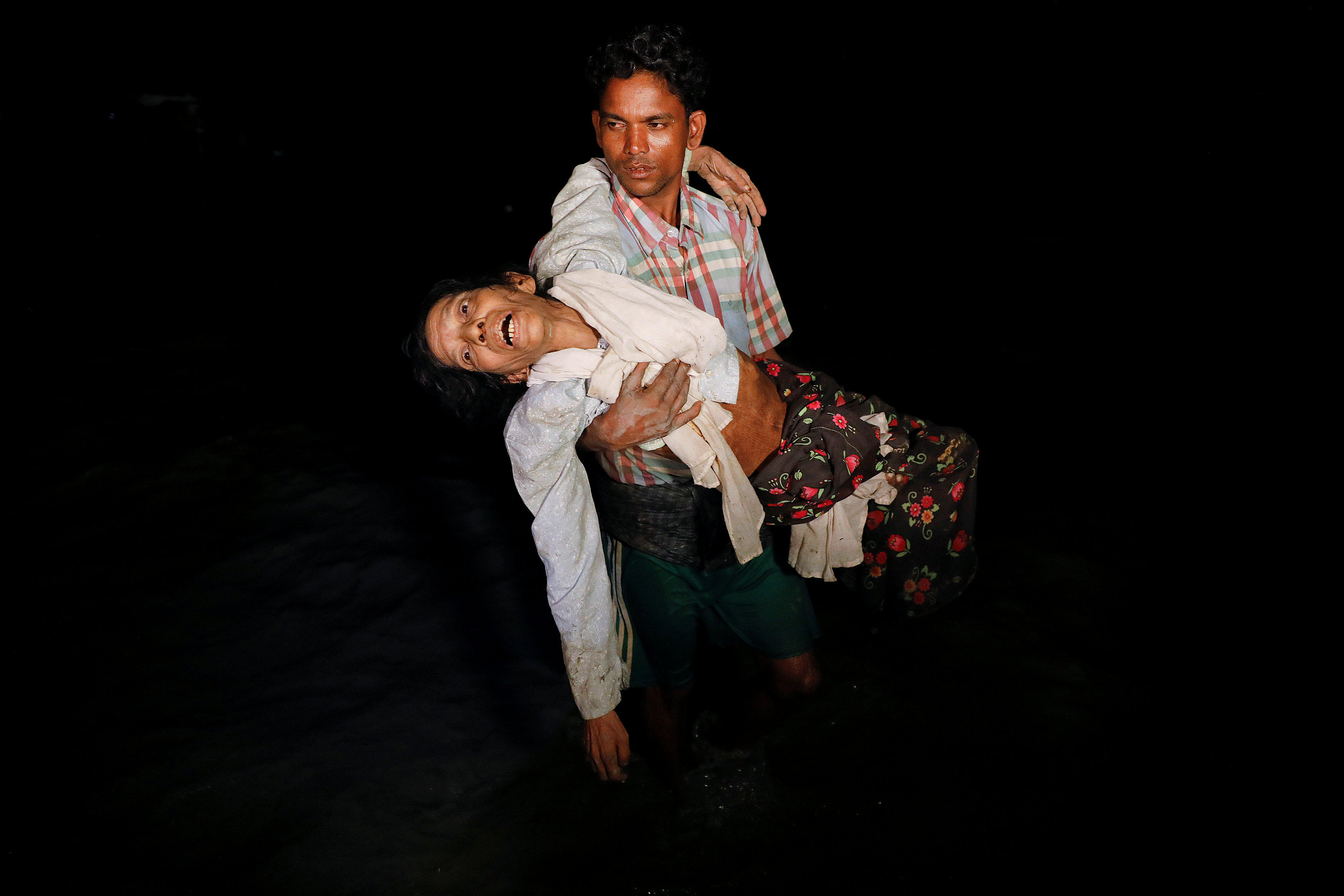 The United Nations Secretary General said Thursday they have received "bone-chilling" accounts from the 500,000 ethnic Rohingya fleeing Myanmar as the country's government abruptly canceled a planned visit by the U.N. to monitor the situation.

"We have received bone-chilling accounts from those who fled -- mainly women, children and the elderly," said U.N. Secretary General Antonio Guterres. Guterres addressed the Security Council in the first open meeting about the crisis in Myanmar, also known as Burma, that was called at the request the United States, Britain, France, Egypt, Senegal, Sweden and Kazakhstan on Thursday.

Widespread violence against minority Rohingya Muslims in Myanmar has led to a mass exodus into Bangladesh. On Thursday, reports surfaced that an ethnic Rohingya insurgent group attacked police posts in Myanmar, sparking a brutal crackdown by the country's military and security forces, which have been accused of razing scores of villages in what U.N. officials have said amounts to "ethnic cleansing."

After Guterres' remarks Thursday, Myanmar's representative U Thaung Tun, speaking at the Council, blamed the media for its reporting on violence by what he called terrorists.

Reports of "a campaign of terror has been unleashed in northern Rakhine and that unspeakable crimes have been committed against innocent people have only served to heighten the concern of the international community," Tun said.

The refugee crisis, which has exceeded 500,000, has "spiraled into the world's fastest developing refugee emergency, a humanitarian and human rights nightmare," Guterres told the Council, and he pointed to serious violations of human rights, including "indiscriminate firing of weapons, the use of landmines against civilians and sexual violence."

Guterres called for the "Muslims of Rakhine State" to be granted nationality by Myanmar. At the U.N. briefing was a representative of the government of Aung San Suu Kyi , the National Security Adviser U Thaung Tun, as well as the Permanent Representative of Bangladesh, Masud Bin Momen.

The U.N. chief said he was "deeply concerned" by the antagonism toward the U.N. and non-governmental organizations, and the recent attacks against the International Committee for the Red Cross by Rakhine villagers in Sittwe.

U.S. Ambassador Nikki Haley, who has been outspoken on the issue said, "We have seen images of acts no person should ever have to endure. We have seen terrified women and children fleeing their homes, with only the clothes on their back."

"It should shame senior Burmese leaders who have sacrificed so much for an open democratic Burma," Haley said, "We cannot be afraid to call the actions of the Burmese authorities what they appear to be - a brutal, sustained campaign to cleanse the country of an ethnic minority."

Stanislav Saling, the U.N.'s Strategic Communications Specialist from the Office of the Resident Coordinator in Yangon, Myanmar, told CBS News that "following the attacks in northern Rakhine on August 25, the U.N. halted humanitarian aid deliveries because the security situation and government field visit restrictions rendered us unable to distribute assistance."

Saling said that, as a result, 110,000 of internally displaced and vulnerable people, who were receiving World Food Program assistance, were left without regular access to food.

"The U.N. maintains a presence in northern Rakhine and hopes to resume distributions as soon as possible," Saling said from Yangon.

Debbie Stothard, the Secretary General of  the International Federation for Human Rights (an international human rights NGO federating 184 organizations), said that in northern Myanmar, "blocking access to the U.N. essentially blocks trust building and undermines effective implementation of the Annan Commisssion, an advisory group, directed by the former Secretary General.

"There is a severe lack of trust in the authorities' commitment to the truth. This can be rebuilt by admitting the U.N. fact-finding mission," Stothard said.

France's ambassdor to the U.N., Francois Delattre, told the Council that "we can't stay silent in front of what's happening under our watch, which is ethnic cleansing."

"I think it is important that the Security Council is able to send a clear message to the authorities of Myanmar that the violence needs to stop, that humanitarian access needs to be guaranteed immediately and without condition," U.K. Ambassador Jonathan Allen told CBS News, before the Council meeting.

Earlier Thursday, a planned visit by a U.N. team to Rakhine state in Myanmar, the region which almost half a million Rohingya Muslims have fled in recent months after violent persecution, was canceled by Myanmar's government, U.N. spokesman Stephane Dujarric confirmed to CBS News.

The head of the U.N.'s migration agency warned earlier in the week of increasing reports of sexual violence directed at Rohingyas in the increasingly over crowded Bangladesh refugee camps. Director-General William Lacy Swing of the International Organization for Migration said he was "shocked and concerned" about the reports of sexual and gender-based violence among Rohingya newly arrived in Cox's Bazar, Bangladesh.

Speaking directly to the Burmese people at the Council meeting, Haley said, "I would like to appeal to the goodness and hope for the future."

On Thursday, almost 90 human rights organizations called for urgent U.N. action on Myanmar, where security forces are engaged in crimes against humanity against the ethnic Rohingya population. Saying that both the U.N. Secretary-General and the U.N. High Commissioner for Human Rights Zeid Ra'ad al Hussein have described the Myanmar security forces' ongoing campaign against the Rohingya in northern Rakhine State as ethnic cleansing, the group of human rights NGOs called for action.

Guterres told the Council that he is urging for three actions: to end the military operations; to allow unfettered access for humanitarian support; and,  to ensure the safe, voluntary, dignified and sustainable return of the refugees to their areas of origin.