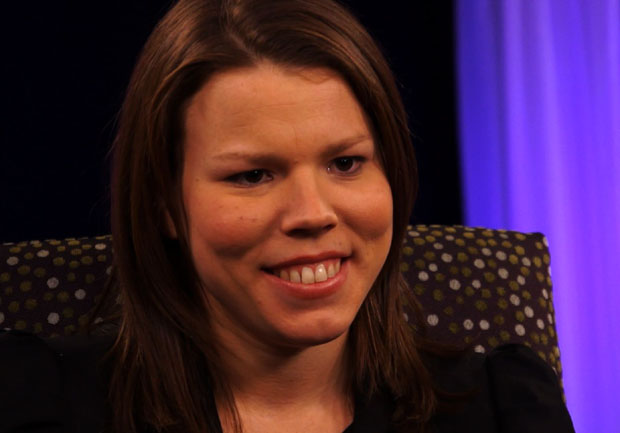 NEW YORK -- Last week, just hours before taking a constitutional law exam at Boston College, Caitlin Cahow got a phone call from the White House. The two-time Olympic medalist in ice hockey had just been named to the U.S. delegation for the 2014 Sochi Winter Games.

The timing was poignant for the openly gay athlete given the focus of her exam: the 14th Amendment and equal protection under the law.

"I've been getting pretty well versed in those issues so I felt pretty confident going into the exam," she told CBS News.

Cahow was among three openly gay sports figures named by President Barack Obama to the delegation (Billie Jean King and Brian Boitano are the other two). The decision to send these athletes to Sochi prompted immediate speculation that the president was jabbing Russia for its controversial anti-gay legislation.

But for the 28-year-old Cahow, the delegation is not about criticizing the policies of Moscow but celebrating progress and diversity in the United States. She cited same-sex marriage, the repeal of "Don't Ask Don't Tell" and the overturning of the Defense of Marriage Act as examples.

"These are huge milestones," she said. "So I'm just grateful that I can go to Sochi representing a country that has so much diversity and so much acceptance and open-mindedness."

Whether gay athletes and spectators are accepted in Russia remains to be seen. After Russia came under fire for passing a law banning "propaganda of nontraditional sexual relations" earlier this year, President Vladmir Putin has been doing damage control. In recent months, he has promised that gay athletes are welcome in Russia and that no discrimination will be tolerated. But he has also consistently defended the controversial legislation, which he says protects children. And earlier this month, he appointed a conservative state news agency chief who has railed against homosexuality on the air.
Cahow, who played eight years on the national team, said she is sure there will be protests and political statements in Sochi but pointed out that it's "impossible to separate the Olympics from politics" in any host city.

For her part, she has recently been active in Principle 6, a campaign that espouses the International Olympic Committee code that prohibits any discrimination at the Games. The campaign wants sexual orientation to be explicitly listed as a form of discrimination in the Olympic charter.

Cahow, who has three world championship gold medals in addition to her two Olympic medals, hopes that Obama's newly appointed delegation can set an example on this front.

"I think it’s a huge moment for the United States – sending openly gay athletes as the representatives of our country," she said. "I can't stress that enough given the history of the United States and how far LGBT people have come and the understanding and how much our policies and mindset have changed over the years. This is really a spectacular moment."

Cahow said she has always been open with her sexuality with friends and family but was reluctant to make it an issue while she played. After retiring from hockey earlier this year, she said she became more comfortable talking about it in the public eye because of "undesirable policy" around the world.

Today, the Harvard-educated Cahow is on the brink of getting her law degree. Driven by a strong desire to be an ambassador for the Olympics and a keen understanding of the 14th Amendment, she is looking forward to the day when her sexual orientation is irrelevant.

"My dream is that when I get around to having my own family that my kids grow up in a world where these classifications no longer matter and you no longer live and die by what someone else categorizes you as," she said. "That is the biggest message here and I can think of no better place than the Olympics where it’s a coming together of all people to really put the mirror back in front of our own faces and say, 'how can we be doing better here at home in the United States to make sure that … everyone is appreciated and valued for their contributions.'"