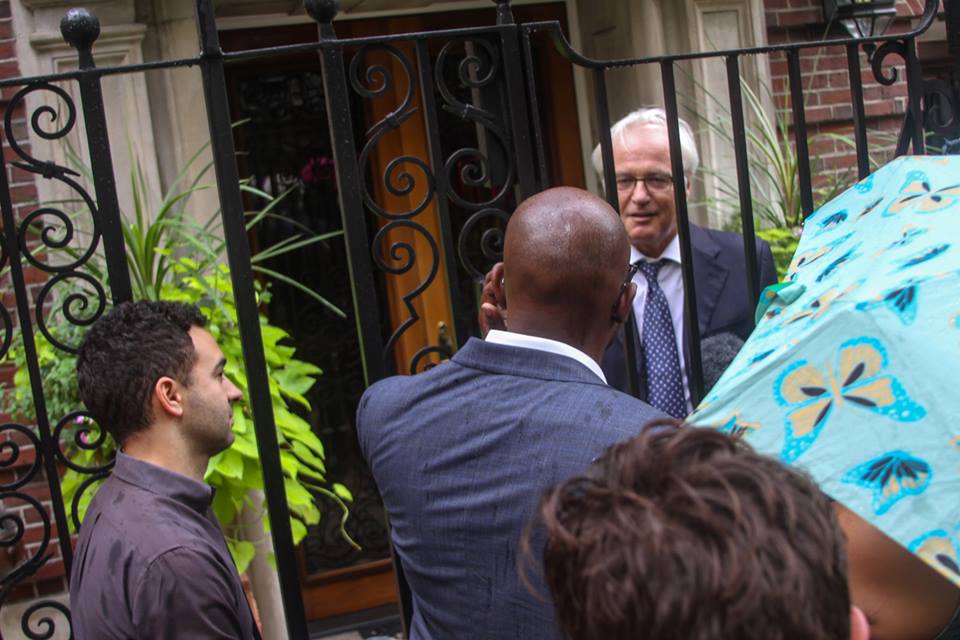 The talks among U.S. and international Olympic officials come as Russia and Russian officials find themselves under increasing pressure over the new laws. Prominent British broadcaster Stephen Fry likened the new laws to the Nazis' persecution of the Jews earlier this week, and on Thursday, Russia's envoy to the U.N. was personally confronted on his New York doorstep by activists wielding a petition signed by more than 300,000 people.

In a letter to Olympic constituents, USOC CEO Scott Blackmun wrote that because the Russian law is new "we do not know how and to what extent (it) will be enforced" during the Olympics.

But he said the safety and security of American athletes is always a primary concern.

He referenced the Olympic Charter, which prohibits any form of discrimination, and said the USOC will gather as much information as it can to pass on to its athletes, and other Americans traveling to Russia, in the coming months.

On Thursday, Sports Minister Vitaly Mutko said that all athletes' rights would be respected during the Olympics but also said athletes would "have to respect the laws of the country."

In an earlier interview with the sports division of Russia's RIA Novosti news agency, Mutko said "an athlete of nontraditional sexual orientation isn't banned from coming to Sochi, but if he goes out into the streets and starts to propagandize, then of course he will be held accountable."

In the letter addressed to several U.S. Olympic organizations and dated July 25, Blackmun wrote, "Like us, the IOC recognizes the seriousness of the issue, and they are in discussions with the Russian authorities on behalf of all nations to ascertain what the laws do and do not proscribe and how they could impact visitors to the Games."

He said that while the USOC supports equal rights for all, its top priority is bringing a well-prepared, competitive team to the Olympics, which run Feb. 7-23.

"To that end, we will seek to find out as much as we can and we will share that information with our athletes and other Americans traveling to Sochi," he wrote.

The USOC is opposed to a boycott of the Games — a topic that has come up frequently in recent weeks, with the anti-gay law and tensions over Russia's decision to grant Edward Snowden temporary asylum making headlines.

"While we acknowledge the seriousness of the issues at hand, we strongly oppose the notion that a boycott of the Olympic and Paralympic Games is in our country's best interests," USOC spokesman Patrick Sandusky said in a statement last month.

On Thursday, activists confronted Russia's U.N. ambassador and tried to hand over a petition with more than 340,000 signatures urging world leaders to help eliminate the anti-gay laws in Russia ahead of the Winter Olympics.

Ambassador Vitaly Churkin arrived at his residence on New York's Upper East Side in the late afternoon to find 10 activists from the international gay rights group All Out outside the wrought iron gates holding red placards saying: "340,457 worldwide say stop Russia's anti-gay crackdown." Minutes earlier, when they got no answer ringing the bell, they had slipped a CD with the signatures under the gate.

Churkin picked up the CD and told the activists they should go through proper channels and deliver the petition to Russia's U.N. Mission. But he stopped for about 10 minutes to engage All Out's co-founder and executive director Andre Banks and insist: "We don't have anti-gay laws. We have laws banning homosexual propaganda among minors."

Banks countered that the word "propaganda" hasn't been defined and gay people in Russia have been killed and arrested.

"That's not true," Churkin retorted. "No gay people have been killed or harmed because they're gay," and if that were proven it would violate Russia's constitution which guarantees equality to everybody "no matter what."

Banks countered that Russian law is being used "in a negative way," citing videos from Russia showing "hate crimes" and "people torturing and bullying kids who are gay."