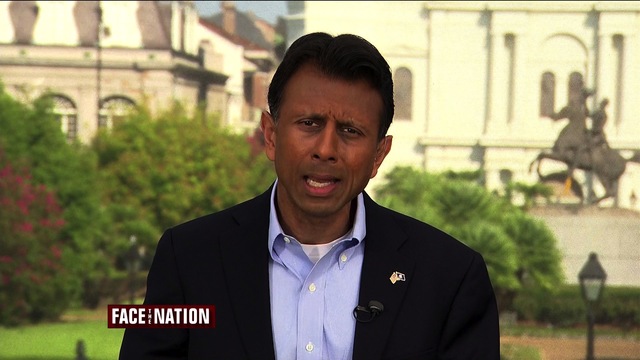 "We need to insist people that want to come to our country should come legally, should learn English and adopt our values, roll up their sleeves, and get to work," Jindal, the Louisiana governor, said in an interview on CBS' "Face the Nation." "We need to insist on assimilation. You know, in Europe they're not doing that. They've got huge problems. Immigration without assimilation is invasion. That can weaken our country."

"Let's forget this politically correct left notion that we're not a melting pot anymore," he added.

Like many of his fellow Republican candidates, Jindal refuses to say what he would do about the more than 11 million immigrants estimated to be living in the U.S. illegally, although he recently predicted on CNN, "I think the American people will be pragmatic and compassionate about the people here." He said Americans stopped trusting a comprehensive approach after the 1986 law that granted amnesty to millions of immigrants in the country illegally and also promised a secure border.

"That didn't happen," he said.

Now, he argues that border security must come first - a process he says will take just six months.

"I know the left says we can't get it done. That's ridiculous. If we're serious about this, it won't be perfect, but we can get this done in six months. Then we can have the conversation about folks that are here illegally," he said.

He also argues that the mayors of so-called "sanctuary cities" where officials don't cooperate with federal immigration enforcement should be held liable for the crimes committed by undocumented immigrants.