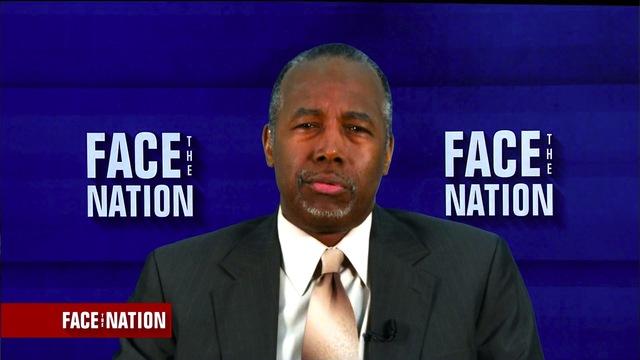 Dr. Ben Carson on Sunday said that Republicans should have reached out to the black community in the U.S. long ago.

In an interview on CBS’s “Face the Nation,” the former 2016 presidential candidate and retired neurosurgeon was asked what he thought about Donald Trump’s latest pitch to the African-American community.

“How is that a success? Why do we want to continue that?” Carson said. “You’re going to hear coming from the Republicans -- which I admit, they have been late to the game. We should have been into this a long time ago.”

Carson said that Republicans haven’t expressed policies to improve black communities “in a way that people can understand them” but that Donald Trump “is starting that” and is being attacked in response.

During the interview, Carson was also asked about Trump calling Clinton “a bigot” and Carson said, “It’s not wise to engage in name-calling at all.”

On immigration, Carson said that Trump is not flip-flopping on his plan for dealing with roughly 11 million undocumented immigrants living in the U.S.

“I think basically what he is saying is there’s no path to citizenship, there’s no voting, unless you go through the same processes that everybody else goes through,” he said. “What’s left over after, that should be dealt with in a reasonable, compassionate and fair way. I don’t think that’s a big departure.”

Pushed further to say whether Trump would deport the 11 million, Carson said, “Certainly, the individuals who have committed crimes, who keep coming back and that [Immigration and Customs Enforcement] demands be let loose into our communities ... those people will no longer be bothering Americans.”

He also called on both Trump and Clinton to release more detailed health records and said he thinks the GOP presidential nominee is “perfectly willing to release that information as long as she releases hers as well.”