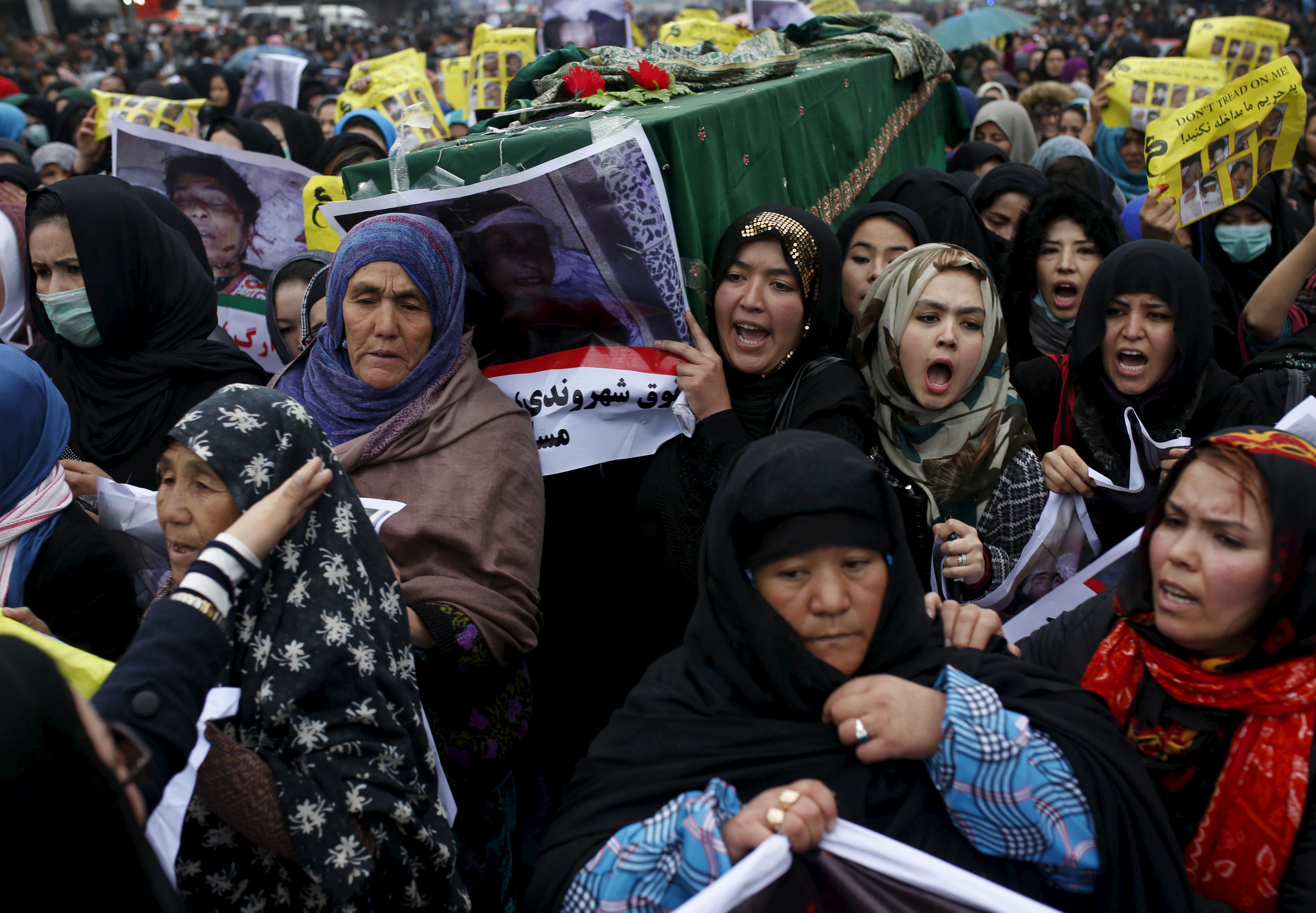 KABUL -- Afghan police fired their guns in the air to disperse thousands of protesters after some tried to breach the presidential palace Wednesday in Kabul. News video showed protesters throwing stones at the palace and trying to breach the perimeter.

Thousands of men and women joined the protest march, carrying the bodies of purported victims of Islamic State of Iraq and Syria (ISIS) militants on their shoulders. ISIS has had a confirmed presence in southern Afghanistan since January 2015.

They marched through the rain to protest the killing of seven minority ethnic Hazara Shiites. The victims were said to have been beheaded by local militants in Afghanistan loyal to ISIS.

The protesters, many Hazaras among them, carried banners and photos of the victims and called for national unity.

Chants of "death to Taliban and Daesh," an Arabic name for ISIS, were heard from the crowd.

Many also and called on the leaders of the National Unity Government, President Ashraf Ghani and CEO Abdullah Abdullah, to resign over their failure to stem the violence still gripping the country.

Ruqya, a protester who like many Afghans goes by only one name, told CBS News through tears that she and the others "come here to get justice" for the murder of people like Shukria, a young Hazara girl said to be among those beheaded by the Sunni ISIS militants.

Protester Ahmad Dawar Nadi also urged the leaders to resign, over "how incapable they are of brining peace and security to this country, which is their first and most important job."

Two women, four men and a nine-year-old Hazara girl were abducted more than a month ago from Gilan district of Ghazni province. Their beheaded bodies were found in Zabul province.

Protesters accused Ghani and Abdullah of recklessness, saying the leaders' families were living in luxury outside the country as the bloodletting continued in their own.

"Would these leaders do the same if their own sons were abducted," asked an elderly woman among the protesters. "I wish Ghani and Abdullah's sons were among our victims, so they would feel our pain too."

"The deliberate murder of civilian hostages, including women and children, is particularly abhorrent," said the statement. "These senseless murders may amount to war crimes and the perpetrators must be held accountable."

It hasn't become completely clear who was responsible for the beheadings -- both the Taliban and ISIS have been blamed and both are active in southern Zabul province.

Afghans from different ethnicities attended the protests Wednesday, along with members of parliament and members of civil society. The crowds were larger than any other protests in recent years.

President Ghani condemned the beheadings and promised an investigation. He said the incident was an indication that the enemy was losing the war.

"By beheading civilians, the enemy of Afghanistan proved once again that they have been defeated on the battlefield by our security and defense forces," the president's office said in a statement.

Abdullah's deputy spokesperson Asif Ashna has resigned over what he called the government's incompetency.

"Our people die in Kunduz and Zabul, but the problem is with politics in Kabul," Ashna told CBS News over the phone.

Neither Ghani's nor Abdullah's offices were available for comment, but Ghani did address the nation, urging calm and insisting that while extremists had "tried to take control of some areas" they had failed, "now they are trying to divide the nation."

"I promise to take revenge on the Taliban, Daesh and whoever committed this," Ghani said of the beheadings.