MINNEAPOLIS (WCCO) -- Nobody knows a town quite like a barber does.

In Mora, they learned long ago that the best place to get the low-down is the Downtown Barber Shop.

"They say, 'How can you stand there and look at a head of hair all day?' I says, 'Well, it's better than what some doctors have to look at,'" Ron Stark said.

Since 1959, 86-year-old Ron Stark has been cutting hair, while 3 feet away, 82-year-old Denny Schulz has been doing the same.

"He said he wanted the best-looking barber at that time and I held my hand up," Schulz said.

"But the barber inspector says he's from Iowa so you have to talk real slow," Stark said.

The jokes and jabs are as synchronized as their scissors.

"We are both easygoing. I don't think we've had a really, serious squabble," Stark said.

The two haven't just built a friendship over the decades, they've built a brotherhood. One they willingly share with their clients.

"He's the only guy that's cut my hair since 1964. When you are 13 and you get a guy that you can talk to at that age, he really made a difference in my life," client Ron Nelson said. 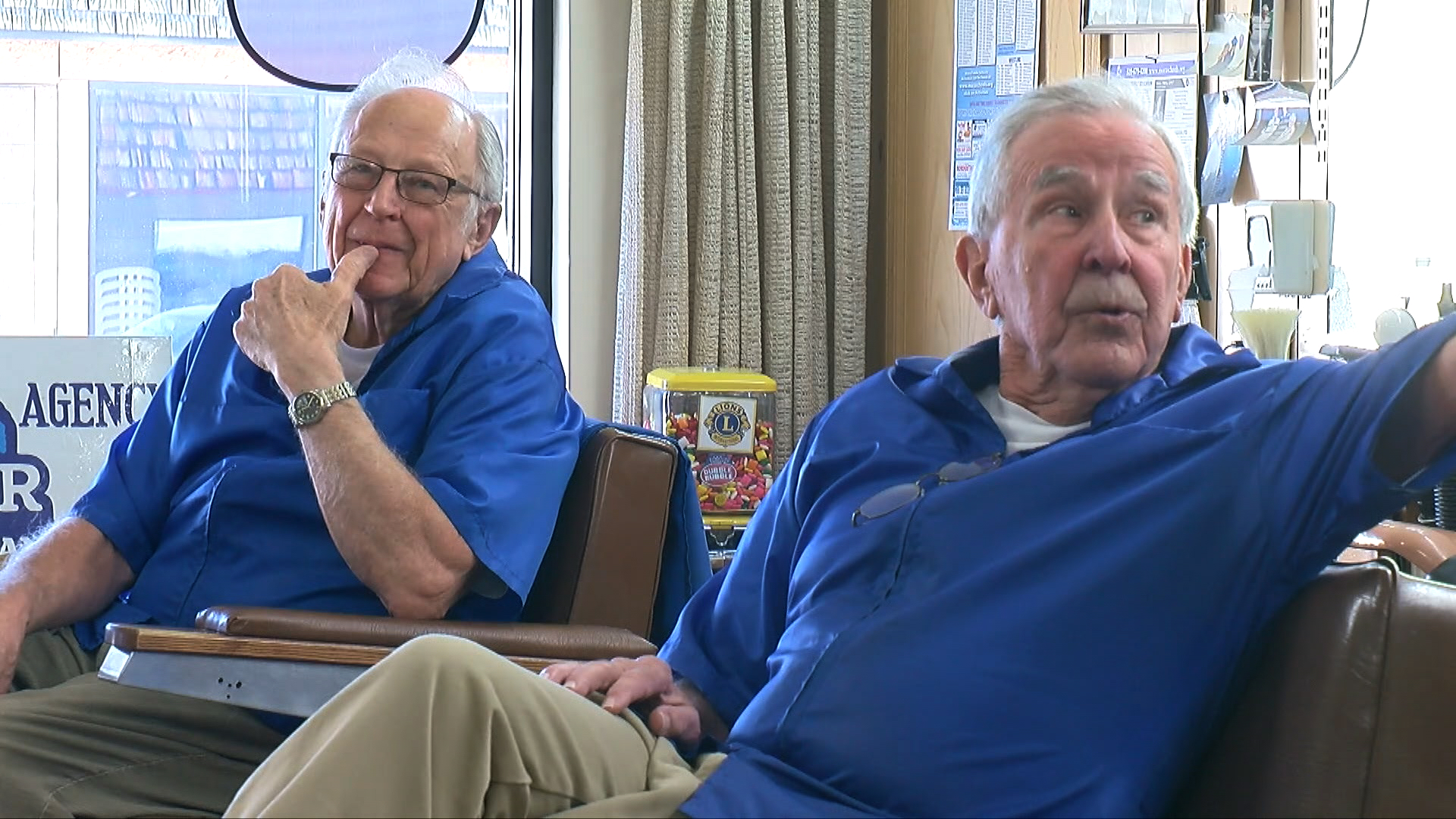 A barber at times, a therapist at others. There have been countless crew cuts, flat tops, and mullets over the years. And mixed right in, there's been advice on everything from careers to family.

"This is my nephew Gary," Stark said, while getting ready to cut his nephew's hair.

Gary Stark was 9 years old when he became one of his uncle's first customers and there are pictures to prove it.

"Whenever we have problems, we come to the barber shop," Gary Stark said.

The longevity is measured by the camaraderie. When a client turned 100, Stark and Schulz teamed up to give him a free haircut. Others return for a trim, decades after they've left town.

"I treasure this picture. He says you gave me a haircut on my graduation day. So he's back for this 50th graduation party, but he had a picture that I gave him a haircut," Ron Stark said.

When Stark, Schulz, and former partner Gordie tallied 150 years of cutting edge success, the town blocked off Main Street and threw a party. A local artist even wrote a song about them.

But sadly, sometimes good things do come to an end. Both men have lost close friends along this journey. And more than once, families have asked them to go to a funeral home for one final haircut.

"You visited with those guys for so many years. It's hard not to visit with them when they're there. I find that difficult. You want to talk to them. And I have," Schulz said.

The partners have no plans to retire. And that's good news for new owner Eric Watrin. Like the town, he views them as irreplaceable.

"I'm hoping they stick around for a while yet, because I haven't been able to find another barber to come in and help me. Worst case scenario, we'll just keep cutting," Watrin said.

That's because there are more conversations to be had, more world problems to solve, more friends to make.

"I can't say anything negative. It's all been wonderful," Ron Stark said.

"We feel like it's a pot at the end of the rainbow. You don't expect this type of thing, nay recognition. You just do what you do. Everyone who has walked through that door is a friend. Even if you've never met them before, they get in here, they're a friend," Schulz said.

Even though they don't plan on retiring, the pair only cuts hair on certain days now.

Over the years friends say both men have done countless hours of volunteer work, giving back to the town they love.