MINNEAPOLIS (WCCO/AP) -- Parts of south Minneapolis were unrecognizable Thursday morning as damage stretched for miles following the second night of violent protests over the death of George Floyd. In response to the wreckage, city leaders called for peace while acknowledging the anger and pain in the community after the death of a black man who was pinned under the knee of a white police officer. 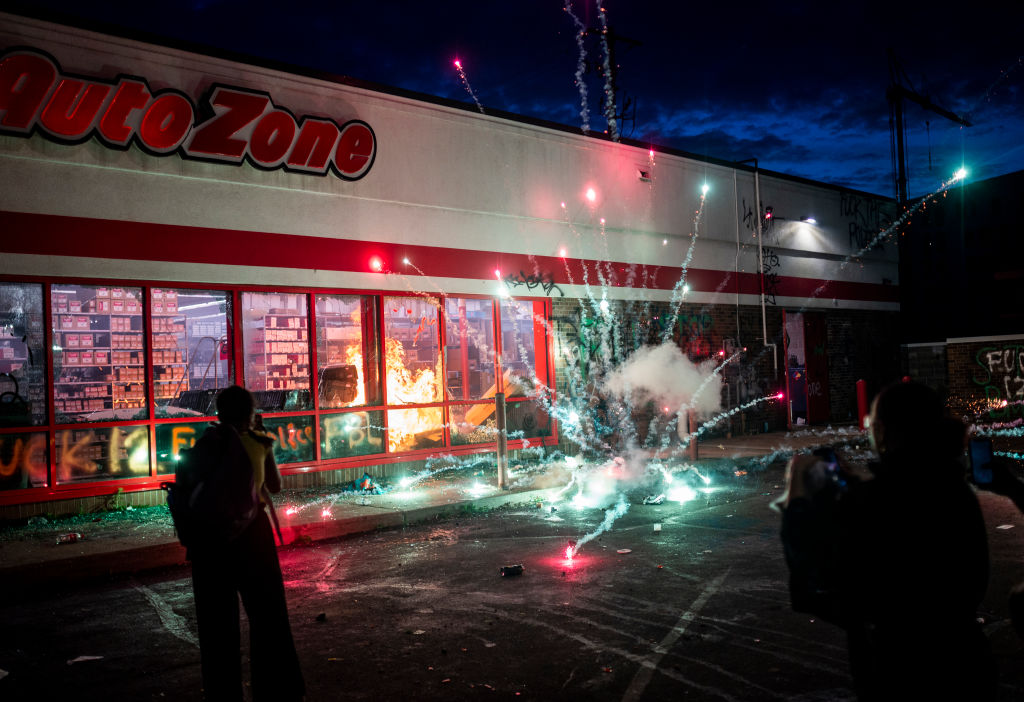 With tears in his eyes, Mayor Jacob Frey spoke to reporters late Thursday morning, announcing that there'll be an all-out effort to restore peace and security in the coming days. Police Chief Medaria Arradondo said that faith and community leaders will be on the streets to help keep the peace, as more demonstrations are planned for Thursday night.

"I believe in Minneapolis. I love Minneapolis," the mayor said. "In believing in our city, we must believe we can be better than we have been. We must restore the peace so we can do this hard work together."

In a stirring moment at the noontime news conference, Minneapolis City Council Vice President Andrea Jenkins sang "Amazing Grace," expressing condolences to Floyd's relatives. A black transgender woman, Jenkins said that the black community in Minneapolis has long felt like it's had a knee pressing on its collective neck.

"A knee," she said, "that says black lives don't matter."

While people have a right to peacefully protest, she added, they have none to commit violence. Her words came as the city was just beginning to assess the damage after night of looting, fires and chaos.

Related: Mayor Frey Says Last Few Days' Are Result Of 'So Much Built-Up Anger And Sadness'

The Minneapolis Fire Department says crews responded to around 30 fires along East Lake Street between Wednesday evening and early Thursday morning. Fire vehicles were hit with rocks and other projectiles, but no firefighters were hurt.

Amid the violence Wednesday, one man was shot dead. When asked to confirm reports on whether he had been shot by a pawn shop owner, police spokesman John Elder said that was "one of the theories." Investigators say a suspect is in custody, but gave few other details.

Aside from the shooting, only minor injuries were reported among protesters and police, the police chief said.

The second night of protests started much like the first, with peaceful demonstrations Wednesday afternoon at the Powderhorn neighborhood intersection where Floyd was pinned down by a police officer. Like Tuesday night, violence later broke out after protesters marched to the 3rd Precinct police station, where they clashed with police in riot gear.

Community leaders reported that a number of the people causing trouble were not recognizable Minneapolitans, the police chief said.

Over the next several hours, looters ransacked, vandalized and burned numerous buildings in the blocks around the 3rd Precinct. Video captured people running out of Target and Cub Foods with their arms full of merchandise. Meanwhile, fires shot up at various businesses -- from a Wendy's to an Autozone -- and some burned without fire crews there to battle the flames.

One fire at an under-construction apartment complex could be seen miles away. The blaze raised a plume of smoke over the Minneapolis skyline, and was picked up on weather radar. James Goblisch, a veteran who lived across from the site for nearly two decades, says he is now homeless, as his apartment building was evacuated.

"It doesn't make sense," he said. "If they want justice for whatever's going on...This, it can't happen."

This is James, standing in front of the place he's called home for 19 years. It's right across the street from the apartment building construction site that was set on fire. #wcco pic.twitter.com/2Xcut8hyc0

The destruction stretched into the Uptown neighborhood, about three miles from the 3rd Precinct, where damage marked the Apple store, Thurston Jewelers and Hi-Lake Liquors, as well as other businesses near Calhoun Square. The owner of Thurston Jewelers said hundreds of thousands of dollars of merchandise was stolen from the store. The shop itself was "totalled," he said. Bullet holes appeared to be in the windows.

Local activist Nekima Levy Armstrong says that city leaders have had years to change the city's police department, citing the shooting death of Jamar Clark in 2015.

"This situation has been combustible for quite a while," she said Thursday morning, adding: "What we see now is a huge symbol of the frustration many people have with the police department."

Protests also happened in other U.S. cities. In California, hundreds of people blocked a Los Angeles freeway and shattered windows of patrol cruisers. Across the Mississippi River in St. Paul, unrest was seen at the Midway neighborhood Target store.

The anger and frustration over Floyd's death were sparked by cellphone footage of his Memorial Day encounter with police. The nine-minute video posted online showed a white police officer push his knee into Floyd's neck as he repeatedly told police he couldn't breathe. Floyd, 46, was pronounced dead at a hospital shortly thereafter.

Police had been called to the intersection of Chicago Avenue and East 38th Street on a report of someone trying to use a forged document at Cup Foods. Floyd resisted arrest, police said, and had a medical incident. However, video obtained by CBS News contradicts that, showing Floyd cooperating with officers, at least in the initial moments of the encounter.

On Tuesday, all four officers involved in Floyd's arrest -- Derek Chauvin, Thomas Lane, Tou Thao, and J Alexander Kueng -- were fired. The next day, the mayor of Minneapolis called for the officer who put his knee on Floyd's neck to be criminally charged. The charging decision is now in the hands of Hennepin County Attorney Mike Freeman.

The U.S. District Attorney and FBI in Minneapolis are currently conducting "a robust criminal investigation" into Floyd's death.

"The Department of Justice has made the investigation a top priority and has assigned experienced prosecutors and FBI criminal investigators to the matter," a joint statement said Thursday.

Anticipating another night of violence, a number of businesses in the Twin Cities have announced closures. Metro Transit says that buses and light rail trains won't run after 4 p.m. The U.S. Postal Service also announced that it will be suspending services at select Minneapolis locations.

Ben Crump, the attorney representing Floyd's family, released a statement from the relatives Thursday, saying that while the family is thankful to the protesters for standing with them, looting and violence "distract from the strength of our collective voice."

The family is urging city leaders and the police department to look at the culture they've created and "ask the hard questions."

A GoFundMe page has been set up to help the Floyd family pay for funeral services in Minnesota, North Carolina, and Texas -- the state's where Floyd lived.