DENVER (CBS4) - Lightning can be one of the scariest and most unpredictable aspects of a thunderstorm but it can also be one of the most mesmerizing too. Billions of lightning strikes are recorded on Earth each year and one single bolt can have a temperature that is more than five times hotter than the surface of the sun. 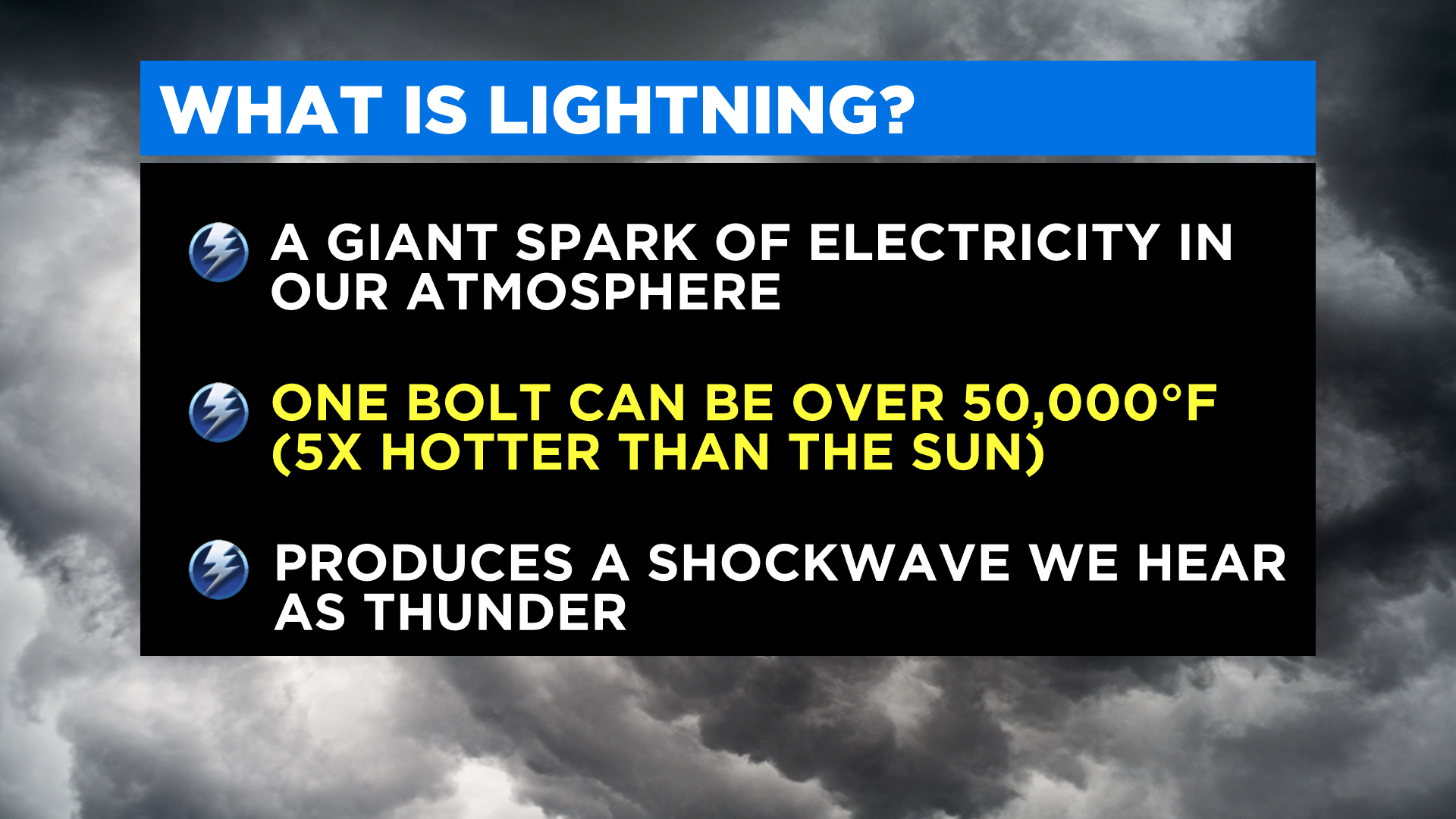 The cause of lightning remains somewhat of a mystery to meteorologists because it's very hard to study it up close. There are several working theories about lightning, how it forms and why some thunderstorms produce a lot of strikes while others seem to have very little lightning activity. 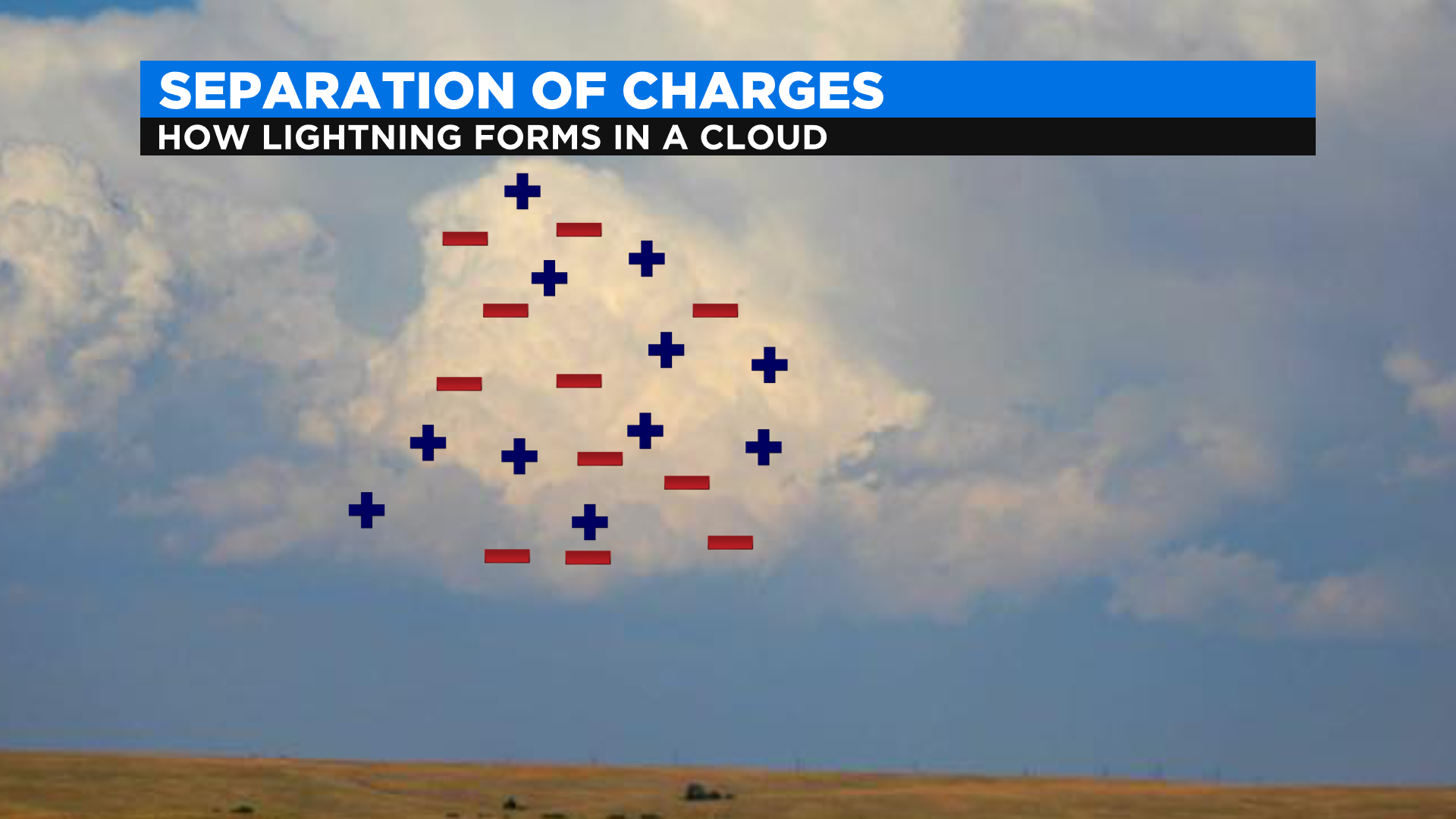 What makes lightning occur is very complicated and begins with what is happening inside the thunderstorm. High up in a mixed-phase cloud where there is ice and super cooled liquid water inside electric charges will begin to separate on wind currents. The most common scenario is for positive charges to gather near the top of the cloud while negative charges congregate close to the bottom. (the opposite can occur) 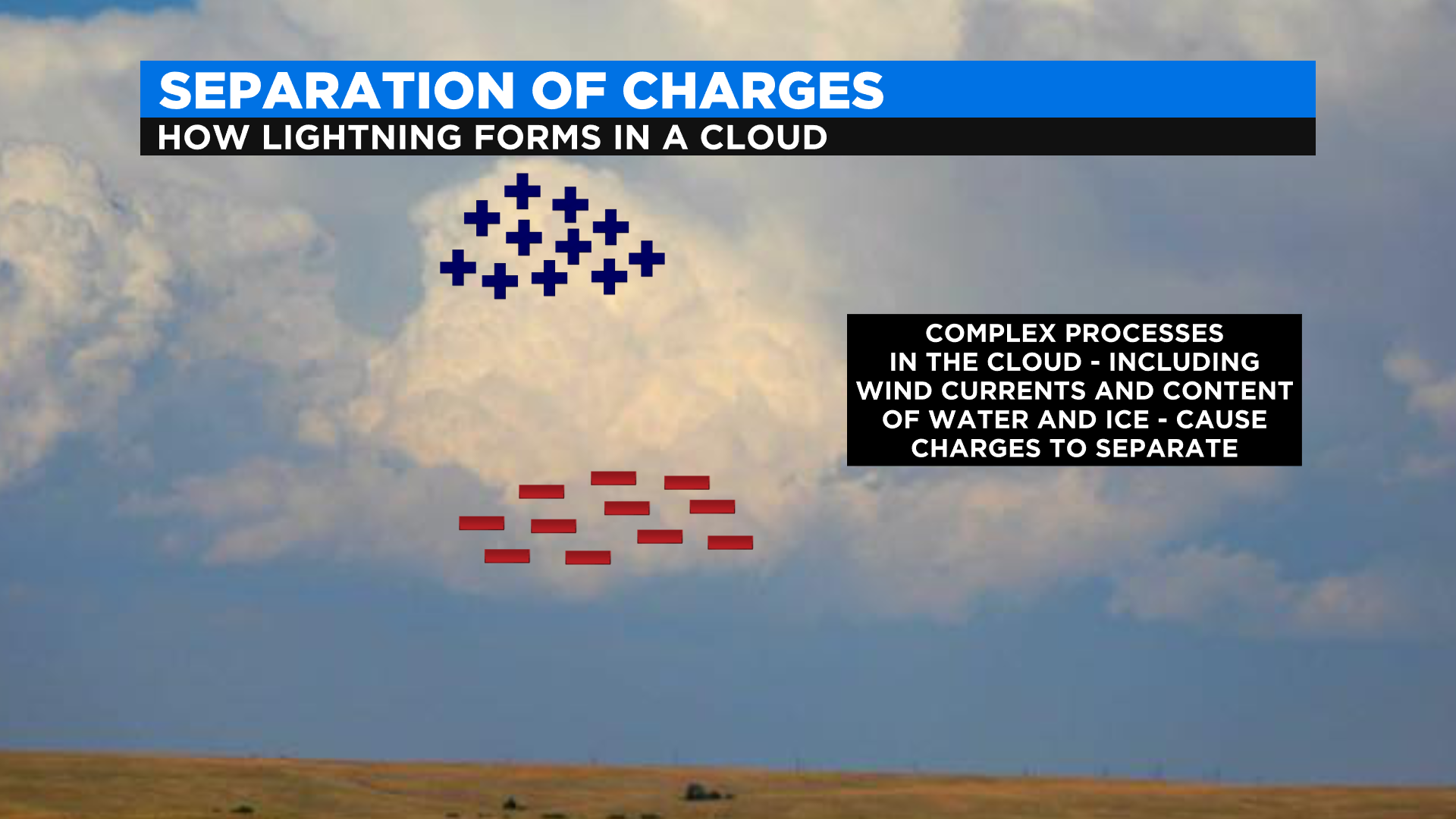 While this is happening positive charges at Earth's surface will gather and rise up through taller objects such as trees, houses and telephone poles. At the same time an invisible connection between the bottom of the cloud and the ground will take place. We call this the stepped leader. 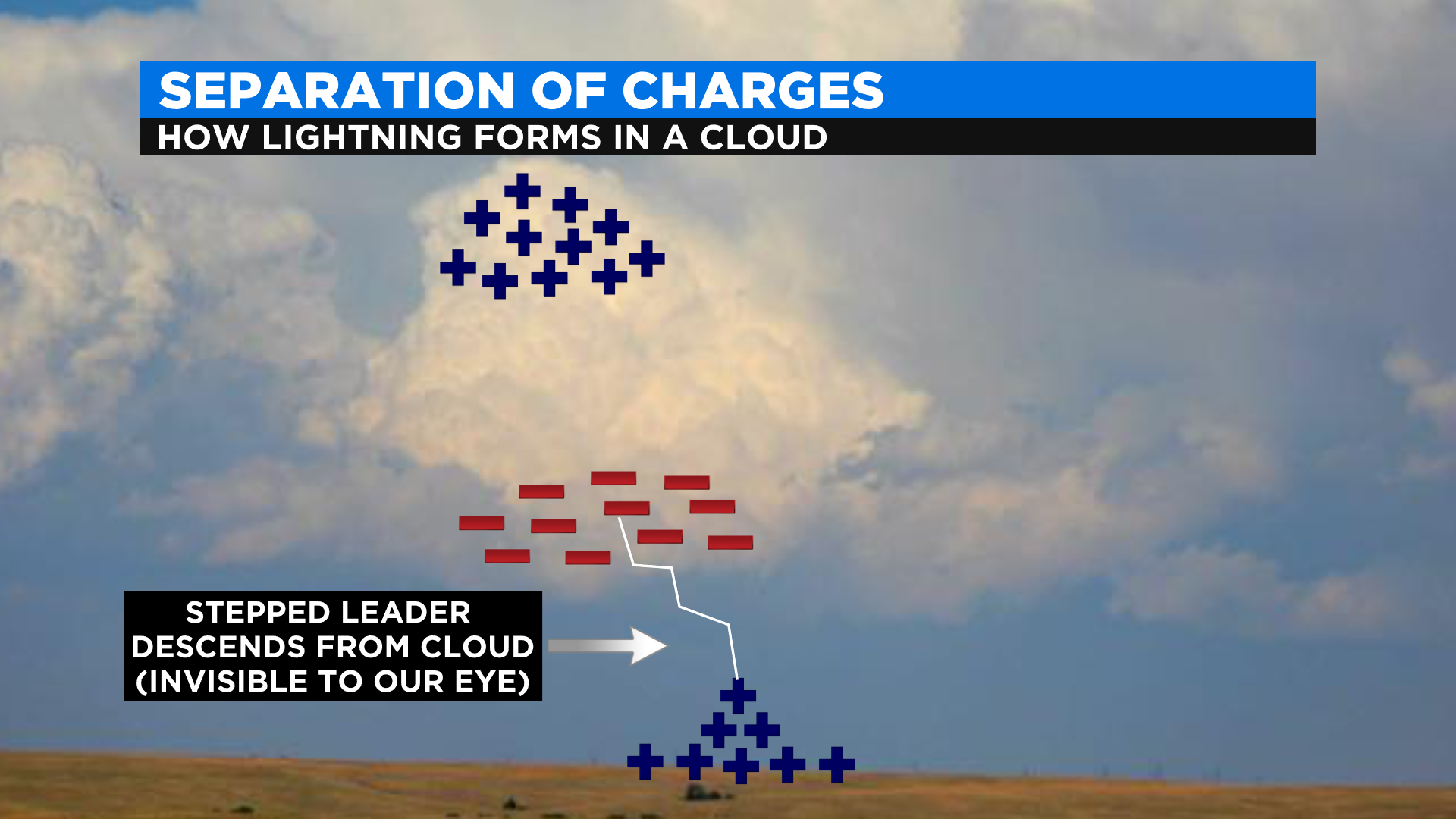 As the stepped leader travels down to the ground it is typically invisible to the naked eye but it can be felt in terms of your skin tingling or your hair standing on end. Once the stepped leader makes contact with an object on the ground the channel lights up and we see it as a bolt of lightning. This is called the return stroke. 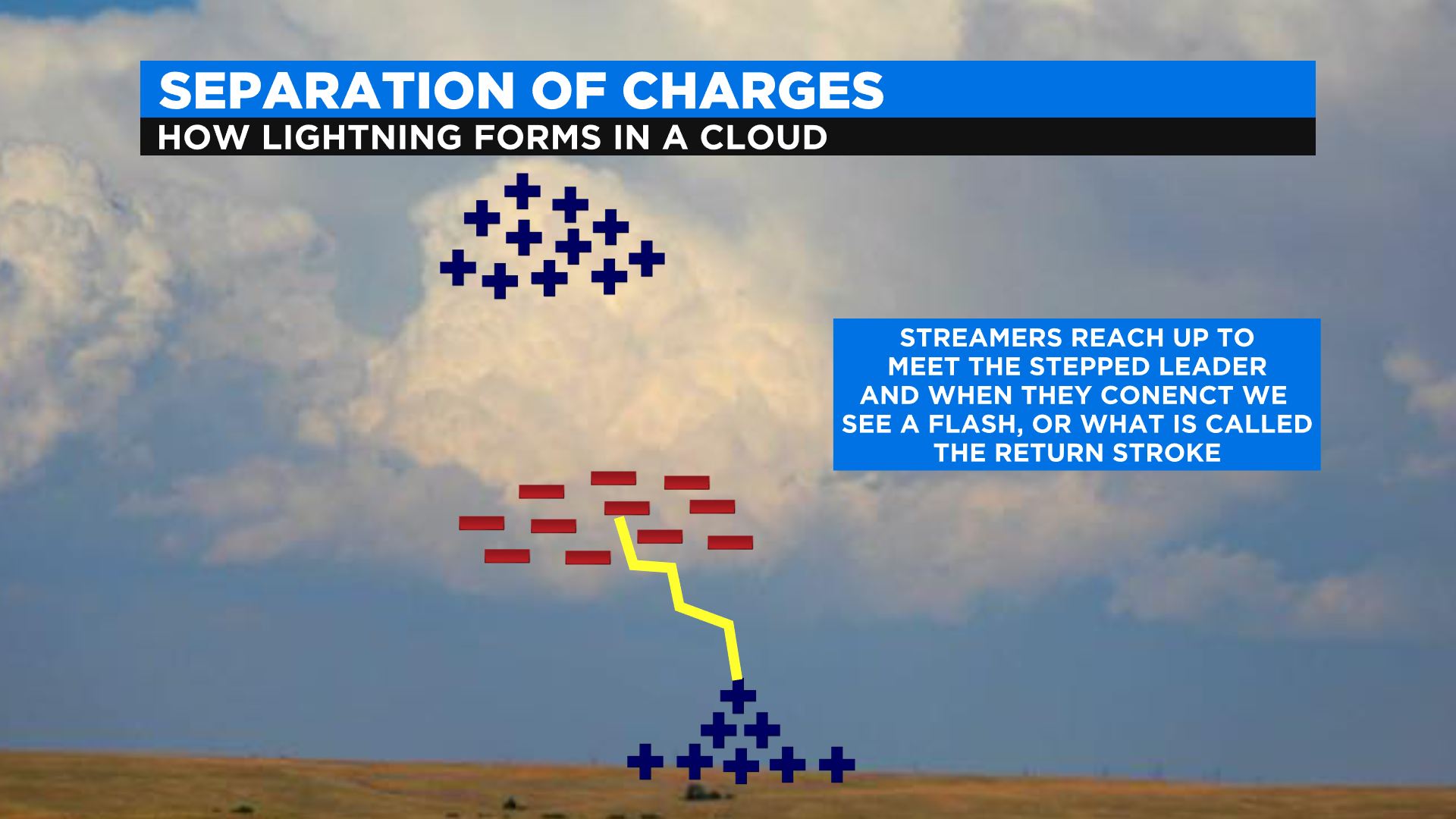 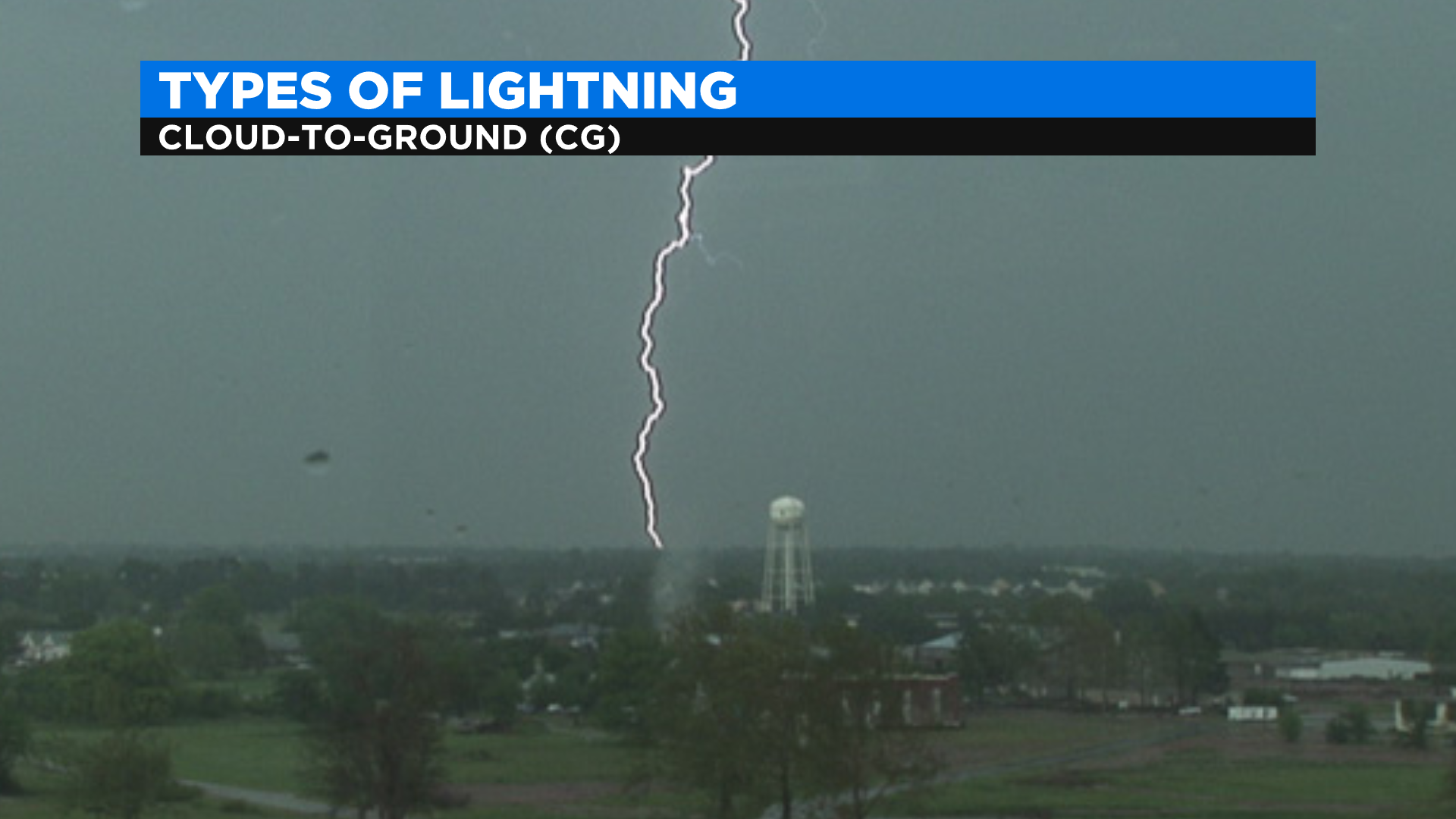 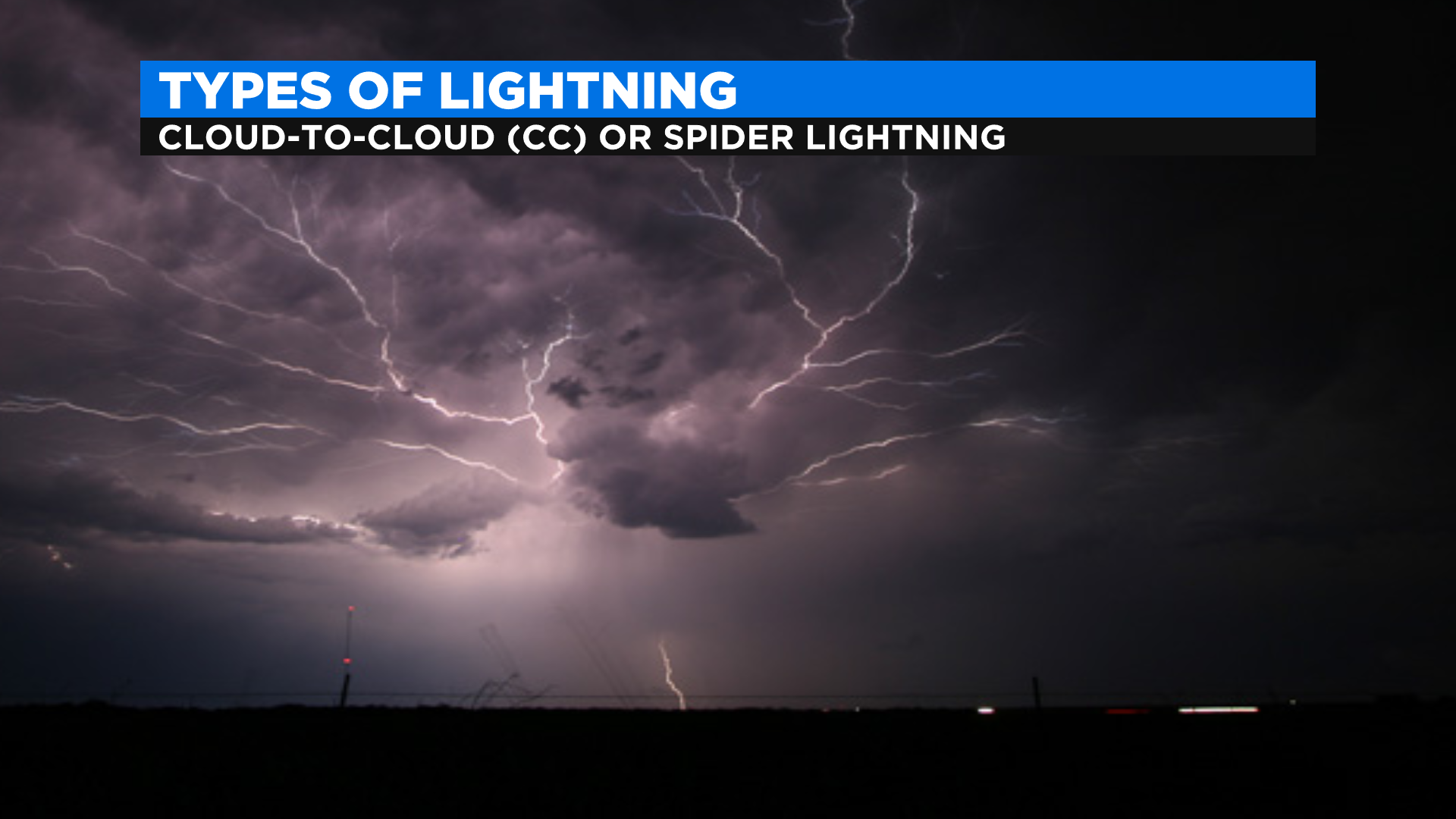 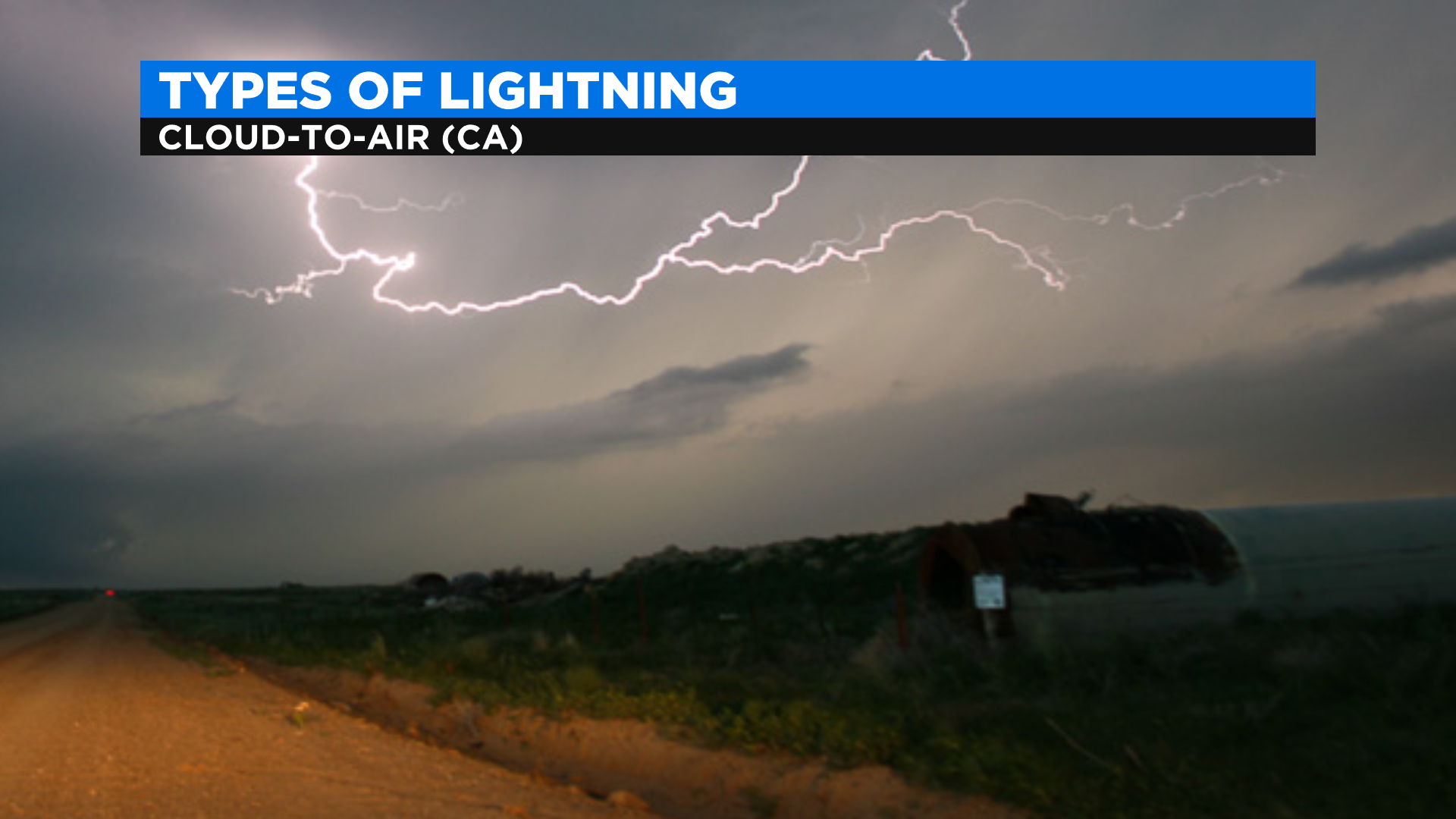 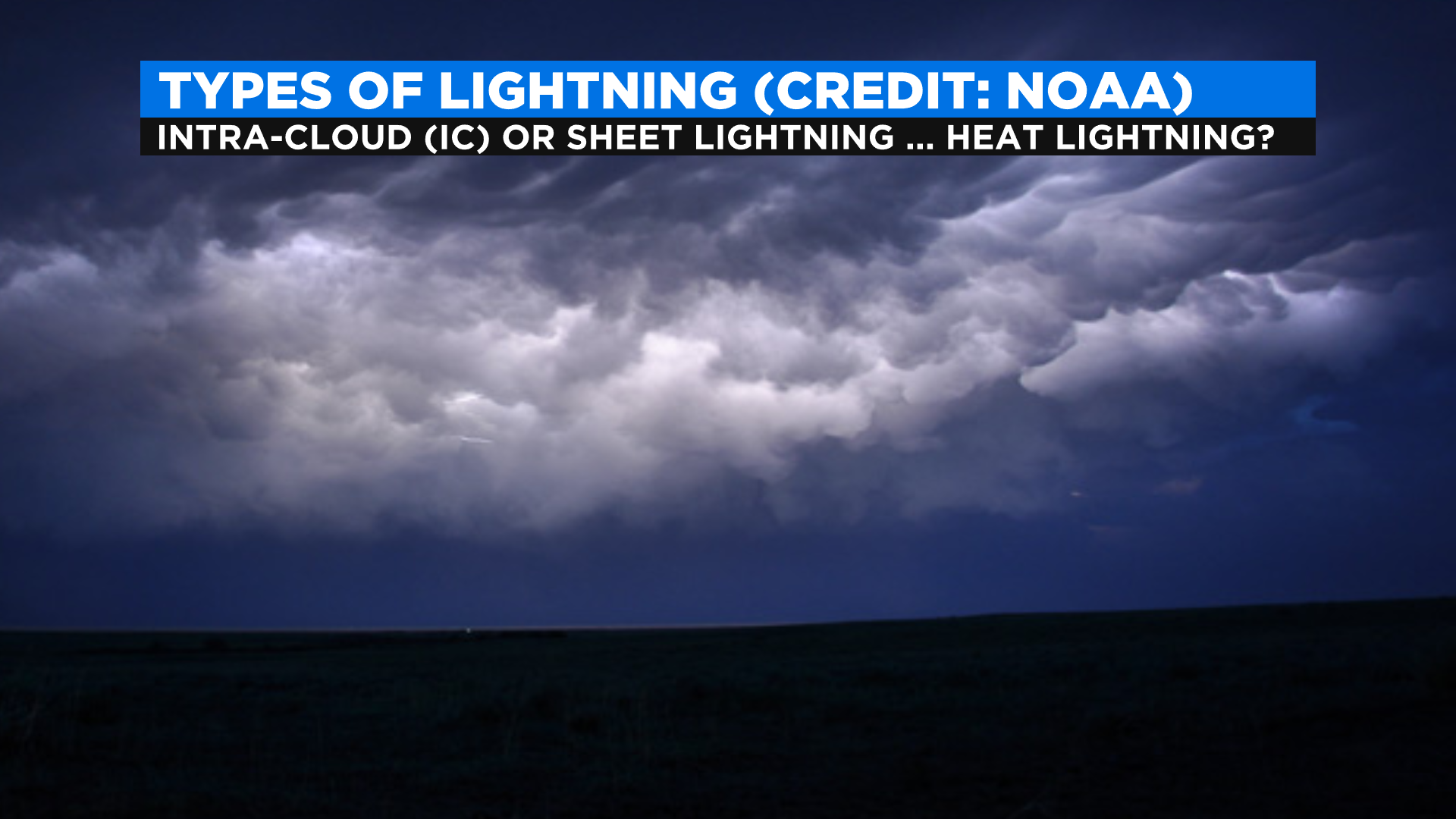 Colorado will typically see several hundred cloud-to-ground lightning strikes each year. The majority happen during the monsoon season, which spans the months of July and August. 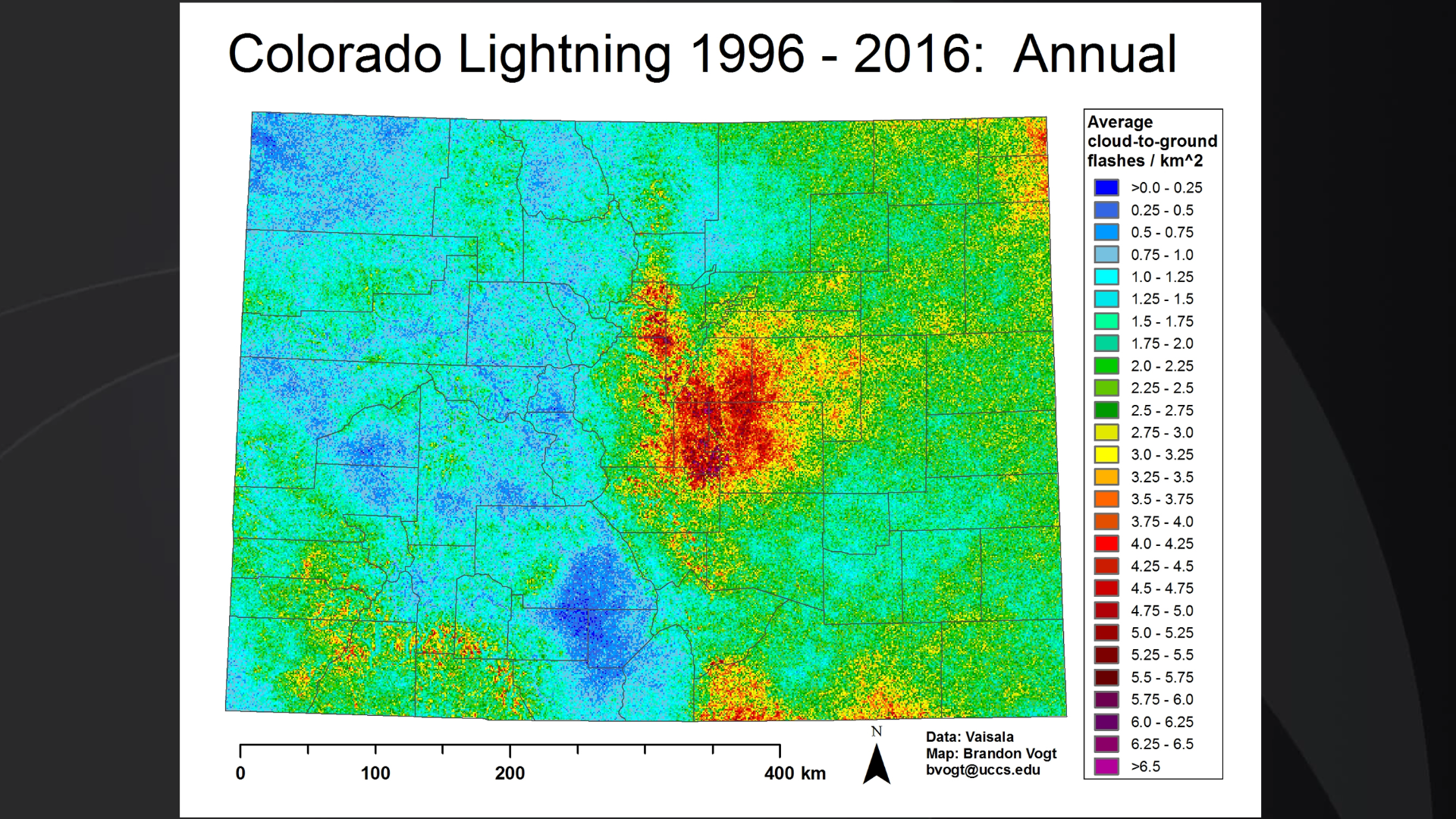 The areas in and around Denver and Colorado Springs tend to be a "hotspot" for lightning strikes thanks to a high volume of thunderstorms forming in this region. Surface wind patterns during the summer months and the local terrain both play a role with enhancing thunderstorm activity in this area. 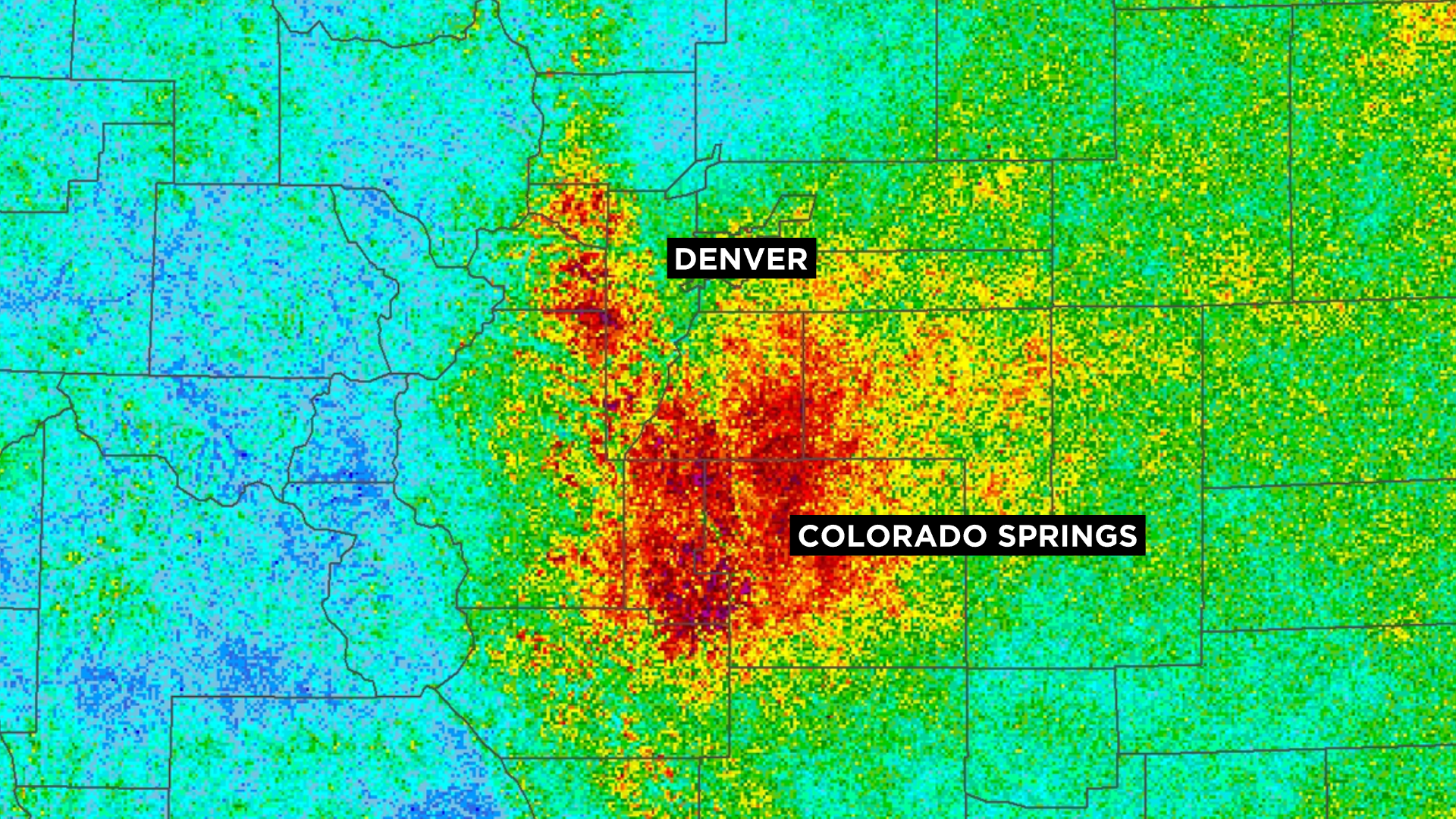