BOSTON (CBS) - Did you enjoy the appetizer? Confidence is increasing that a sizable nor'easter is going to develop early this week which will make Saturday's snow event look like a skimpy side salad before a giant Thanksgiving dinner.

Saturday's storm was no slouch when you compare it with our winter so far.  In fact, it will end up being Boston's biggest snow maker since the middle of February 2014.  But like Coach Bill Belichick would say, we are on to Seattle, or in this case, we are on to the next storm.

Let me preface this by saying nothing is set in stone yet with this forecast. I know, you hear us say that all the time, but unfortunately in the business of predicting the future, more often than not, things will change.

You may be wondering where this potential nor'easter came from, as we weren't all that bullish on it just 24 hours ago. The fact is, it was always there but up until Saturday afternoon it didn't appear as though the atmosphere was going to line up so perfectly.

Most weather models took the storm, which is currently in the upper Midwest, over the Carolinas and out to sea harmlessly to our south. 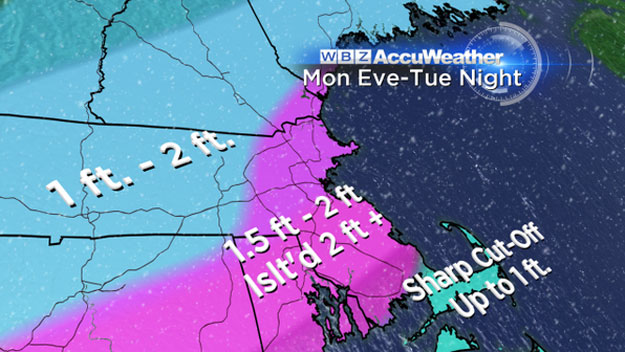 The "perfect" atmospheric setup doesn't happen often, but it just may come to fruition over the next several days. There is a chance we could be in for an historic, epic, blockbuster (fill in dramatic weather adjective here) nor'easter .

So why the drama? This one has everything going for it, as all the essential ingredients are there. It's just a matter of how they all come together.

You can see the storm in its infancy right now if you like. It is currently over the upper Midwest and will put down a modest amount of snow on its way to the coastline. A coating to a few inches is expected from Minneapolis to Chicago and about 3-to-6 inches from Indianapolis to Pittsburgh Sunday through early Monday.

Then things get real interesting.

A potent piece of atmospheric energy will cause the jet stream to dig deep into the Southeast by Monday morning. This will allow some moisture to be drawn in from the Gulf of Mexico.

The jet stream will get all sorts of bent out of shape, taking on a "negative tilt" and by Tuesday it will literally cut off from the normal west to east flow, becoming nearly stationary just to our south over the Atlantic. This will cause that modest storm from Minneapolis to explode into a full-fledged coastal monster by Tuesday morning.

One thing we were missing during the Saturday storm was a strong, cold area of high pressure to the north in eastern Canada. For any real good New England storm this is a necessary component.

A strong high to our north serves two main purposes. First it supplies a continuous source of cold air to keep the precipitation in frozen form. Second, it creates a strong pressure gradient, thereby creating powerful winds, especially at our coastline.

Unfortunately, it appears as though we can put a check next to this ingredient as well. Cold air and strong winds will certainly be present during our next storm.

Enough technical stuff, let's get to the forecast.

Like I said earlier, it is still relatively early, too early for snowfall numbers and an hour-by-hour, blow-by-blow breakdown.

But, with a storm of this potential size and strength, it is vitally important that everyone be prepared for the worst and know what to expect if that does occur.

This should be a long duration event, perhaps snowing for about 24-to-36 hours. Start time will likely be after sunset Monday night, say between 6-and-10 p.m. Peak snowfall rates are most likely to occur between midnight and midday Tuesday. Light to moderate snow could continue right through Wednesday morning.

Huge potential with this storm. As currently depicted by many weather models, 1-to-2 feet of snow is well within reason. If this one reaches its full potential it may be a top 10 or even top 5 snowstorm of all-time in Boston.

Those are big shoes to fill, but not that far-fetched as things appear right now.

Doesn't look like anyone in New England will be left out this time, as it should be cold enough for all snow with perhaps the exception of Cape Cod and the islands where some mixing cannot be ruled out.

A similar timeline to the snow, I would expect strong east-northeast winds as early as Monday evening, quickly ramping up overnight to a dangerous and damaging level at the coastline. Sixty-plus miles per hour seems like a sure bet, perhaps even some isolated gusts to hurricane force (74-plus miles per hour).

During the day Tuesday, the powerful winds would continue, but veer more in a northerly direction as the storm slowly moves past our latitude. It could literally take until Wednesday night before the winds truly settle down.

One piece of good news here is the tides have passed their astronomical peak this month and are headed down. They will be a foot or more lower than they were just last week and this could potentially save some our coastline from a major flooding event.

However, with a storm this size and this powerful, moving so slowly, some significant coastal flooding and beach erosion is inevitable.

And to a lesser degree (due to lessening winds and mainly offshore direction):
Wednesday: 5:30 a.m., 6 p.m.

Will it be a Blizzard?

Just to refresh your memory, the official definition of a blizzard from the National Weather Service:

Sustained winds or frequent gusts of 35 miles per hour or greater and visibilities less than 1/4 mile for at least three consecutive hours.

The winds should be a no brainer, just a matter of snowfall rates and visibilities staying that low for that long a time period. As of this writing, I would say it is a serious possibility on Tuesday.

Please stay tuned to updated forecasts over the next 24-to-48 hours. This is potentially one of those storms that you really do not want to mess with or take any chances on the roads or outdoors in general.