No, not those kinds of aliens. These are the kind who cross the border in a spaceship.

Not only is Cowboys & Aliens, as a science fiction western, a representative of perhaps the most underpopulated hybrid genre on record, it also pairs two undeniable movie icons, establishing its pioneer credentials even further.

With Harrison Ford and Daniel Craig headlining director Jon Favreau's sci-fi oater, it's as if Indiana Jones and James Bond had suddenly turned up for a gunfight.  Y'know, "Indy and 007 at the OK Corral."

Note the order of items in that it-is-what-it-is title, by the way: this is a western with the extraterrestrial element added, even if it does more or less take over the movie in its second half.

But for the foreshadowing moments anticipating the outer-space stuff to come, the first act of Cowboys & Aliens is pretty close to a pure western. And a spiffy looking one at that.

We're in the desert mining town of Absolution, in Arizona territory, in 1875, when a lone stranger played by Craig -- who's channeling Clint Eastwood and Steve McQueen -- wanders into town with a shackle encircling his wrist.  He has no memory of how it got there or how he got here.

Come to think of it, he has no memory of anything. Yup, he's got the screenwriter's best friend: amnesia. And that may be his only friend in town.

Because Absolution is not exactly a welcoming place.  Part of the reason that paranoia already runs rampant here is that the town is ruled with an iron fist by a cattle baron, Col. Woodrow Dolarhyde, played by Ford in character-role mode.

Then something absolutely unexplainable happens in Absolution: invaders from the sky attack, swooping down suddenly, accompanied by blinding lights, and abduct a number of citizens, including Dolarhyde's troublesome son.

Which turns the remaining townsfolk, fearing annihilation, to the heretofore ignored stranger, whose gradually recovering memory helps him realize that he is Jake Lonergan, a gunslinger who might be able to help the desperate populace fight back against these apparently otherworldly interlopers.

So, with the help of the mysterious Ella, played by Olivia Wilde, Jake organizes a posse that includes the colonel and lots of folks from town who have been rivals or foes of each other until banding together to fight this uncommon common enemy.

And once they figure out what it's for, that strange little item around Jake's wrist just might end up coming in real handy given the battle Jake and the others are about to fight. 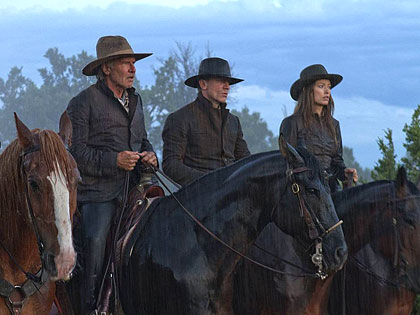 Favreau (Iron Man, Iron Man 2, Elf, Zathura) -- with Ron Howard and Steven Spielberg in two of the producer chairs -- blends the alien-invasion thriller with the traditional western but, despite the film's campy title, plays it relatively straight.

After setting up his western and delivering big-screen-western pleasure in the conventional way, Favreau gives in to the impulse to show us too much of the CGI aliens. Which is why the level of tension drops so precipitously in the late going, as the film for the first time feels creature-feature formulaic and starts resembling a "been there, done that" shooting-gallery video game.

Favreau and his screenwriters tip their cowboy hats to The Searchers, the John Ford classic starring John Wayne, by borrowing its thematic trappings.  The screenplay by Roberto Orci, Alex Kurtzman, Damon Lindelof, Mark Fergus, and Hank Ostby, based on a story by Fergus, Ostby, and Steve Oedekerk that is itself based on an idea from the 2006 graphic novel by Scott Mitchell Rosenberg, is first and foremost a western, but one with the splashiest of add-on wrinkles, which helps make up for some of the narrative holes that the sizable screenwriting committee somehow overlooked.

So slide over, Wild Wild West, Back to the Future Part III, Westworld, and Serenity, and leave just a little space -- outer space -- because there's a new sci-fi horse opera in town that'll steal just a smidge of your thunder.

We'll invade 2½ stars out of 4 for a deadpan thriller that delivers a saddlebag full of mix-and-match escapism, Cowboys & Aliens.  This dadgum genre ain't big enough for the both of us, podner.