As a general rule, I don’t suggest taking relationship advice from ballers be it NFL, NBA or God forbid the MLB. And for the most part they hold up their end of the bargain, they play ball, play the field and refrain from doling out relationship tips.  (Thank you, Jesus).  Except, apparently, for Lawrence Taylor. When interviewed recently, the former Super Bowl champion Linebacker suggested that Jets backup Quarterback Tim Tebow (you know, the God fearing, self-proclaimed virgin) ‘Find a Nice Girl and Get Laid.’

Did I mention LT is a registered sex offender who pleaded guilty last year to sexual misconduct after he was caught getting it on with a 16-year old Bronx runaway?   Stick with the Bible, Tim.

Find out more of what Taylor said via CBS NewYork 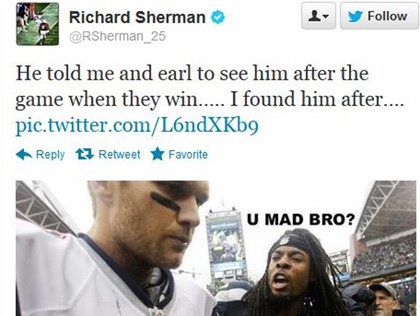 U Mad Bro? That’s what Richard Sherman asked Tom Brady via Twitter the day after the Seahawk’s surprise win over the Patriots last Sunday – complete with the attached photo of the cornerback getting in Brady’s face and that million dollar question scrawled on it.

Brady’s wife super-model Gisele Bunchenpromptly tweeted back – “ Well my hubby can’t  (bleeping) throw the ball and catch it the ball at same time!”

No she didn’t say that this time, I just totally made that part up. But how epic would that have been?

You can click here to find out what really happened after Sherman sent that Tweet via CBS Boston.

During last week’s Monday night game between the Broncos and Chargers, Denver wide receiver Eric Decker caught a Peyton Manning pass destined for a touchdown.   Only, the guy completely tripped over his own feet en route to the end zone, which must have been the most embarrassing moment of the night for Decker.

That is, until Decker’s fiancé, Jesse Rose James, in an attempt to deflect haters Tweeted this, er, insider information: 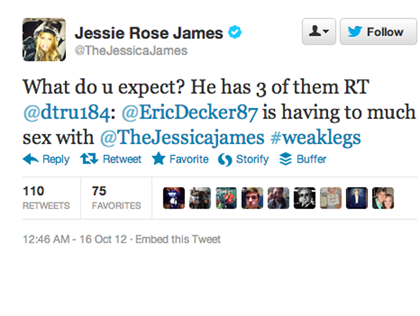 Too bad the third appendage doesn't come with any extra Fantasy points.

Get the longer version from CBS Chicago

You'll Get a Kick Out of This

I bet 49’ers kicker David Akers thought he was really something when he kicked that pigskin 63 yards through the uprights to tie an NFL record in September.

He booted a 67-yard field goal Thursday night to tie the score and force the game into OT.   So far, he hasn’t been offered any college scholarships – but something tells me that’s gonna change soon.

This Runner Is No Flop

Keith Levasseur ran the Baltimore Marathon last week in under three hours.  Not bad, huh? Right – but so what? Thousands of people run marathons every year.  Only Levasseur didn’t do it wearing the latest state of the art running shoes.  He hoofed it all 26 miles donning flip-flops.

I think anyone who runs marathons in general must be a wee bit sadomasochistic - but this guy takes the prize.  Speaking of prizes, find out what title Levasseur now holds and what conditions those “dogs” were in after the race.  Go to CBS Baltimore for the rest of the story.

We here at CBS Local pretty much figured out that A-Rod makes about 60 grand every time he steps up to the plate whether he homers or strikes out.  And we all know there’s been a lotta K’s on his spreadsheet lately.

Guess what?  The third baseman makes the same amount of dough sitting on the bench or ignoring the field while trolling the stands for model-types.

We all know Yankees fans are a bunch of whiners – but you can’t blame them when A-Rod uses his "time off" during game one of the ALCS to toss a ball into the stands to get a chicks phone number.