NEW YORK (CBSNewYork) -- Two workers trapped for more than an hour on a collapsed scaffold high above the streets of Midtown Manhattan were rescued on Wednesday afternoon.

As CBS 2's Alice Gainer reported, it all started around 2:40 p.m. Wednesday, when workers Victor Caraballo, 26, of the Bronx; and Stephen Schmidt, 49, of Brooklyn, became stuck after their specialized scaffolding buckled into a B shape.

The workers were trapped near the 45th floor of the 46-story Hearst Tower at 57th Street and Eighth Avenue while performing routine maintenance.

Firefighters wasted no time. They initially thought about making the rescue from the roof, but opted for plan B.

"Go into 44th floor and use specialized tools to cut the glass," said fire chief James Leonard. "It's the safest way to get there. If we lower people, then we have to bring them back up."

The workers were on either side of the site of the buckling when they became trapped. They had been resting comfortably and communicating with firefighters above.

Footage showed the workers, assisted by firefighters, crossing from the scaffolding into an open window on the 44th floor of the building at around 4:10 p.m.

A 4-foot by 4-foot section of glass was cut out and removed so the workers could be let in, officials said.

Firefighter Tom Gayron, a six-year veteran of the FDNY, helped the workers cross the three-foot gap to get from the scaffolding back into the building.

"Once we secured them from the roof, we cut the glass, other members lowered me out onto the scaffolding. I assisted the members back into the building," Gayron said at an FDNY news conference Wednesday evening. "We were able to tie off the scaffolding from the inside of the building, pull it tight to the building. We were just assisting them, one hand inside one hand outside."

The workers were wearing safety harnesses and communicating with firefighters nearby at the top of the 46-story building. Firefighters stretched a safety line to at least one of the workers.

Gayron brushed off the rescue as no big deal, 1010 WINS' Glenn Schuck reported.

"We drill on this a lot, we practice this," said Gayron. "It's really just like when you're training. You're not really worried about how high. It's just getting out there. You know, you're worried about getting these guys in, and the training just takes over, and you just kind of do it."

Rescue paramedic Moses Nelson said Caraballo and Schmidt were not injured during the ordeal.

He said they thanked everyone who helped bring them to safety and added they were overwhelmed by the response.

"'All this for us?'" Nelson recounted one of the men saying.

Two firefighters were seen lying on their stomachs at the top of the tower, observing the situation below as the rescue unfolded.

According to the FDNY, crews arrived on the scene within four minutes of getting the call. The entire operation took about 90 minutes, the department announced.

The FDNY conducted what is called a "high angle rescue."

Wind was a significant factor during the rescue. Wind gusts were at least 25-30 mph at street level, CBS 2's Vanessa Murdock reported. Gusts at 46 stories were stronger. 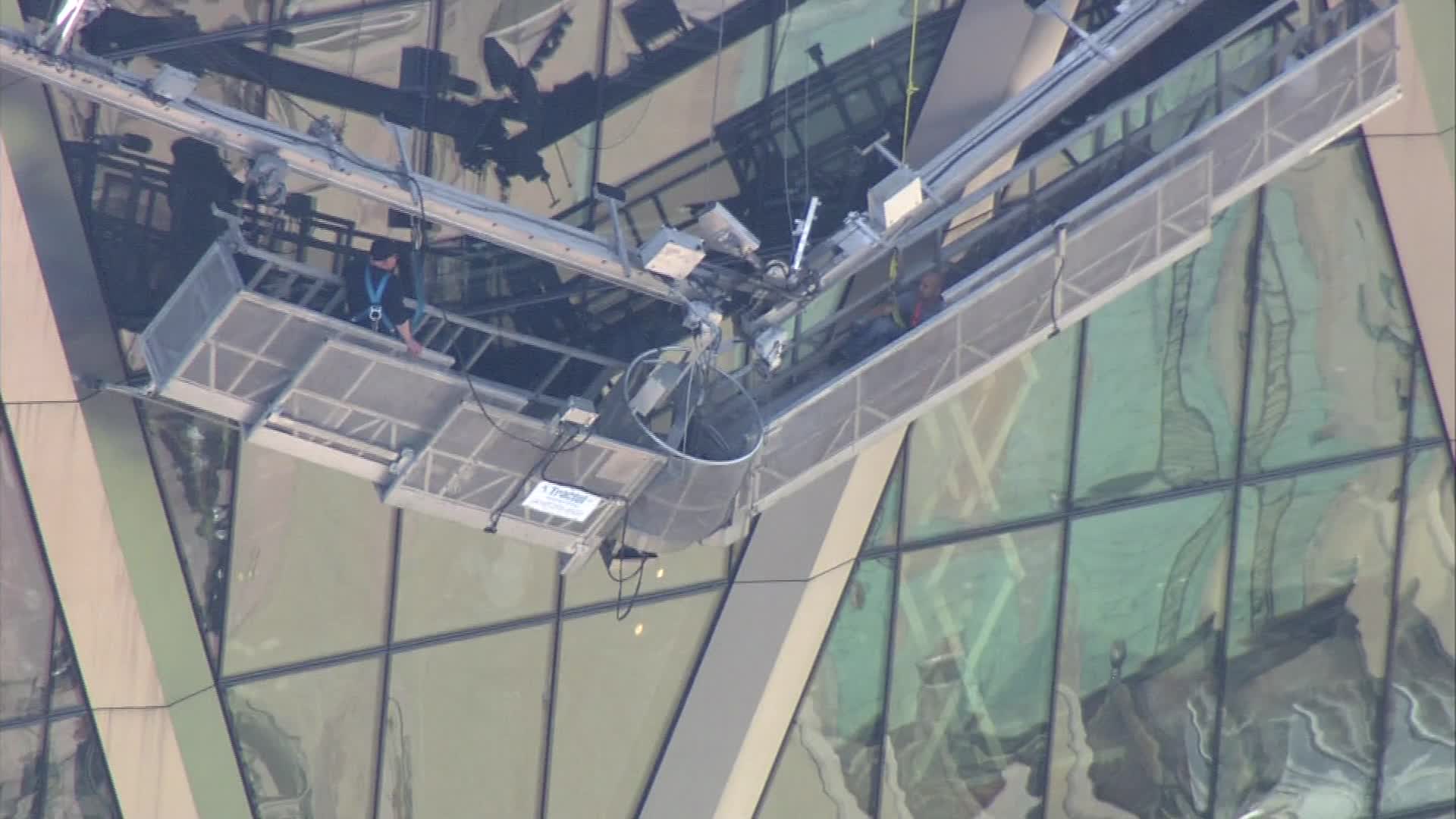 On the street below, everyone walking by was looking up to catch a glimpse of the incident.

But as CBS 2's Steve Langford reported, the damaged scaffold and the rescue could not be seen from street level.

"I just walked down the street, looked up and I saw that. Another amazing moment where New York is a little nervous," one passerby told Langford.

"As visitors from England this is vaguely exciting but horrible and tragic," another onlooker said.

The damaged scaffolding could be seen being lifted to a rooftop above the scene of the incident at around 5:20 p.m.

The Hearst Building is famous for its unusual triangular framing pattern. The framing required a different type of window washing apparatus, manufactured by Tractel-Swingstage, according to a published report.

The New York State Department of Labor had an inspector on-site looking into the scaffolding incident as of 6 p.m., CBS 2's Gainer reported.

The rescued workers were calm because they're used to dangling high above the city, officials said. But fire officials added the job is no cakewalk.

"They're always at a risk," Leonard said.