Does Rex Ryan remind me of Peter Griffin? Absolutely. Is Rex reminiscent of Homer Simpson? There's no question.

Boisterous. Full of hot air. A non-winner the last four seasons. Overstuffed with rhetoric. On the surface, the former Jets head coach may seem unattractive. But does Rex have a Teddy-Bear personality and sheer earnestness for a desire to win that make it nearly impossible to dislike him? No doubt.

At his introductory news conference as head coach of the Buffalo Bills on Wednesday, Rex proved that he is the NFL's biggest rock star. Despite a 46-50 record through six NFL seasons, he attracted a massive crowd. It was as if the media was in Western New York to see the halftime performer speak days before the Super Bowl, always the busiest press conference of the week. Seizing the opportunity of speaking to so many of his new constituents, the coach with a losing record wasted no time winning over his new blue-collar region.

"Are we going to play a form of physical football? Absolutely."

"Are we going to do ground and pound? Yeah. You're darn right we are."

"Are we going to throw it? Yeah, we got Sammy Watkins outside. Why wouldn't we throw it?" 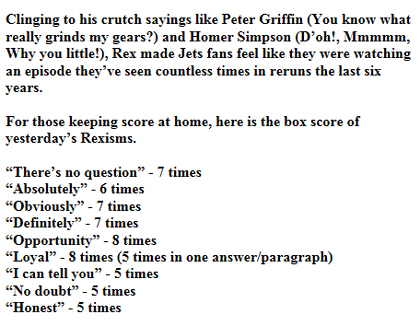 Does coach Ryan use hypophora, a form of speech where he asks a question and then immediately answers it himself? Obviously, there is no doubt. Honestly, I can tell you that absolutely, given an opportunity, Rex will definitely be loyal to his speaking style. Was Rex in true form yesterday, outlining his plan as Buffalo Bills head coach? There's no question about it.

"Will we go for it on fourth down? Will be do these types of things? Will we fake a punt when leading by three with three minutes left to go in the game on a fourth-and-13? Yes. The answer is yes, we will."

Now that Jets fans are no longer married to Rex, they can appreciate him as the character — and caricature -- he is. Think of him as a girlfriend or boyfriend you parted ties with but can still keep tabs on because he still lives in-state.

Is Rex like the NFL's hokey version of Frances McDormand in "Fargo?" You betcha. He cozied up to locals in his opening remarks.

"I played hockey and all that. I actually lived in Toronto for eight years, and we used to get the Bills games. And, so, I followed the Buffalo Bills and I understand the history of the AFL, and the history of this franchise. I see Billy Shaw up here -- 'Lookie lookie, here comes Cookie' -- all those type of things. (Jack) Kemp, the Electric Company, all of them. I can go over every guy that played. And, so, I understand it."

Not only did Rex appeal to his new bosses, Bills owners Terry and Kim Pegula, but he tried to win over a fan base that has seen him as an enemy since 2010. While he didn't speak in Homer or Peter's terms of Duff Beer or Pawtucket Pale Ale, Rex warmed up the crowd by sharing a cold beer with Bills legend Jim Kelly the night prior. Through references to team history and even local hockey, Rex implored to Bills nation that he is one of them.

"When my dad was coaching with the Jets, and I was able to get to all the Buffalo Bills games when they would play, (I saw) how passionate those fans were, and it was just amazing ... Those fans were so passionate about their team ... I'm not going to let our fans down. I am not going to do that ... We represent our community. The Buffalo Bills represent this community of Buffalo. We're going to be tough. We're going to be as loyal to our fans as they are to us."

Rex has the personality to win friends and influence people, but remaining an NFL head coach is not a popularity contest. He will have to win in Buffalo. On Wednesday, he won over the fan base. For now.

"It's been 15 years since the Bills made the playoffs. Well, get ready man. We're going. We are going."

Oh, no. Another guarantee?

Herein lay the secret of Rex's success: "The pursuit."

What makes Rex so interesting is that he has some Winston Churchill in him. Churchill defined success as having the ability to move from one failure to the next without any loss of enthusiasm. Nobody could doubt Rex's passion to win or his disregard for negatives of the past. Even though Jets fans became fluent in Rex's game of bluster, many wanted him to remain their head coach. It reminds me of a politician who embarrasses himself publicly time and again, yet wins one re-election after another.

If he wanted to, could Rex Ryan become president? There's no question. Can you think of another NFL head coach who represents more Americans than Rex? Honestly, I cannot. No doubt. Is Rex more skilled at being a spin doctor than any NFL head coach? Absolutely. Definitely. I can tell you that he not only turned a question about supposedly having more interest in the 49ers and Falcons jobs into a pro-Buffalo statement, but he absolutely showed that he can appeal to whatever audience he needs to play to.

When asked if being a lifetime Toronto Maple Leafs fan ever came up during his interview with Terry Pegula, Rex was loyal to his unashamed style.

"We talked about it. It did not go over well, but I changed my alliance. I'm a chameleon when it comes to hockey; thus the Devils, Rangers and all that type of stuff. I always support the local teams. I'm absolutely a huge Sabres fan. I did ask Kim, 'Can I get a deal on Sabres season tickets?' And she said, 'No.' As you know, I did grow up a huge hockey fan and things like that. If Bruce Gamble was still in the net for the Leafs, maybe I'd be a Leafs guy, but I'm a Sabre all the way right now."

Right now is all that matters to Rex. It's all that ever matters. This is why he is so successful. He is not measured solely by wins and losses. No doubt, I can tell you that.

Jared Max is a multi-award winning sportscaster. He hosted a No. 1 rated New York City sports talk show, "Maxed Out" — in addition to previously serving as longtime Sports Director at WCBS 880, where he currently anchors weekend sports. Follow and communicate with Jared on Twitter @jared_max.