New York Jets cornerback Darrelle Revis has quite the resume thus far through nine NFL seasons. He's a seven-time Pro Bowler, a four-time first-team All-Pro selection, an AFC Defensive Player of the Year and a Super Bowl champion. He's a top 10 cornerback in NFL history and will be inducted into the Hall of Fame when his day comes.

On Tuesday, Revis' accomplished resume grew even more as he was inducted into the Ride of Fame. The Ride of Fame is a worldwide series of mobile monuments dedicated to public figures, highlighting and promoting their respective cities with their business and personal endeavors. On Tuesday, it continued its fifth-year anniversary celebration with the induction of the Jets' all-time great.

"It's pretty cool," Revis said. "It's something very touristy and I'm glad that I got honored for it."

Revis wasn't just honored for his work on the field, but also for his charitable efforts with the Revis Island Foundation.

"When I got the opportunity to do this, that was one of the No. 1 priorities, to tie it into my foundation," Revis said. "I do a lot with underprivileged kids back in my hometown (of) Aliquippa. This is great. I jumped on this pretty fast and wanted to be a part of this whole deal."

Each honoree is bestowed with a double-decker bus designated with a permanent "Immortal," IT" and "Imminent" classification artwork, and a personal seat with a written message from the honoree. Previous honorees have included Henrik Lundqvist, Mariano Rivera, David Wright, Jeff Gordon and more. Revis will be making use of the bus. 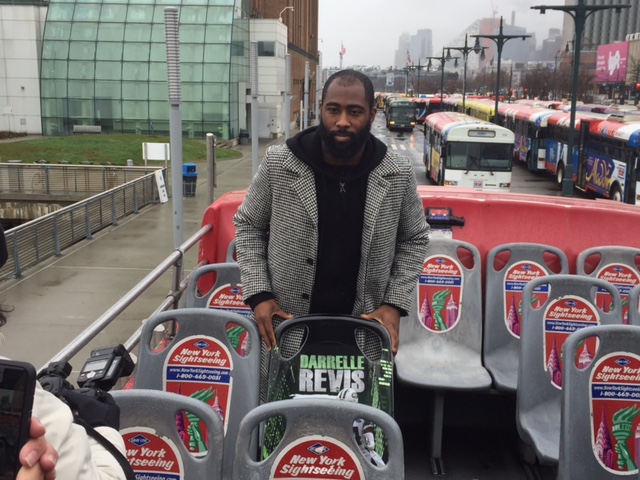 "Yeah I'm going to be using the bus," he said. "I think it's going to be a fun thing for my family to enjoy, and just for the city of New York to enjoy, as well as being a part of the Ride of Fame."

It's been a wild ride for Revis. He started his career with the Jets before playing for the Bucs for a year, and then won a Super Bowl with the Patriots. Now, he's a win away from leading Gang Green to a playoff spot.

"If you look back at it probably when I was a rookie, if you probably told me that -- I don't know, you might be crazy," Revis said amusingly. "Crazy how things panned out. You never know what's around the corner for you. Every situation I've been in, it's been opportunities. It's been things I've been able to do throughout my career that help me along the way. It made me grow into the person I am today."

Amongst the whirlwind career has been a wide array of coaches. From Rex Ryan to Bill Belichick to Todd Bowles, Revis has certainly had different experiences with the three.

"They definitely all got different personalities," said Revis. "They're unique in their ways in how they coach. I think through all of those experiences I took a lot. I was a sponge during those times. Now with Todd, I'm learning as much as I can from his defensive scheme and his football knowledge and I'm just trying to be SpongeBob Squarepants. Just trying to absorb all the football information I can get."

Revis will lead the Jets Sunday against the Bills and his old coach. Only fitting, right?

"You couldn't write a better way than we got to play our former coach," the 30-year-old Revis said. "We know he's going to throw everything at us, plus the kitchen sink, to try and ruin our season and spoil it. And it's vice versa. We have goals where we want to go as a team and we definitely got to win this game to prolong our season."

The Jets are coming into Sunday as one of the hottest teams in the NFL. They won't need to do any scoreboard watching Sunday at 1:00 in Buffalo. With a win the Jets are locked in to an AFC wild-card spot.

"Our backs are against the wall," he said. "As a team, we definitely understand that. We're in good spirits. We're on a five-game winning streak and hopefully we can get our sixth this upcoming Sunday."

The Jets have not made the playoffs since 2010, during Revis' first stint with the Jets. They will look to put their five-year playoff drought to an end with a win over Rex and the Bills on Sunday on CBS.

Jake Brown is the Digital Program Manager at CBS Sports Radio and a columnist for CBS Sports Radio, CBS Local Sports, and CBS Local. He hosts the Play.it podcast Brown and Scoop, which is a Sports and Entertainment podcast that features weekly shows and daily interviews with some of the best guests in both fields. Jake lives in Queens, NY and has struggled living the life of a Mets, Knicks, and Jets fan.