Brett Eldredge is among country music's brightest new stars, with the singer-songwriter always reaching beyond his chosen genre without betraying the sound for lazy pop trappings. After releasing his debut album Bring You Back over the summer of 2013, Eldredge turned up his public profile with an opening slot on Taylor Swift's recent Red tour.

Eldredge has become a common name in Nashville, but the singer's roots trace back to the small town of Paris, Illinois, where he grew up as a big-time sports fan, devoted to all things Chicago.

"I grew up a huge Bears fan, a huge Cubs fan, a huge Bulls fan," he told Fan Sports Live during a recent interview.

"My dad's a [Green Bay] Packers fan. There would always be this little rivalry between all of us," he continued regarding the storied NFL franchises. "Our whole family is Bears fans but my dad, because he liked Bart Starr, quarterback for the Packers back in the day."

That personal family rivalry serendipitously led to a special father-son moment between Eldredge and his dad back in 2011.

"The first time I got to sing the National Anthem in a big stadium was the Bears-Packers [game] at Lambeau Field," he explained. "So I got to bring [my dad] on the field, we got to stand there as the kickoff went, he got to stand on the field when no one was in there and we were the only ones, and I'm singing. That was a really cool moment. I still don't like the Packers that much, but I respect them because of my dad, and I respect them because they're a great team. But go Bears all the way."

While his beloved Bears were knocked out of playoff contention this season by those very same Packers, Eldredge still dreams of the day his team is able to find its way to one of the world's biggest sporting spectacles.

"I wanna go to a Super Bowl. I want it to be the Bears, and I want them to win it, and I want to go," he laughed. "I'm waiting for that moment." 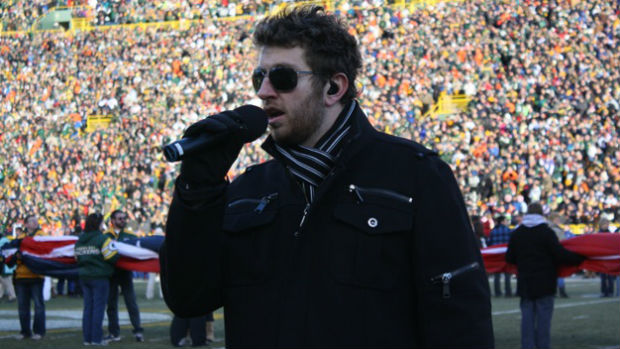 Since the Bears are out of the mix, Eldredge is pointing towards the NFL's most obvious choice for MVP this year, Peyton Manning, to lead the Denver Broncos to the big game in February.

"I think the Broncos are going to be the team to beat this year. I always root for Peyton Manning, because I just think he's a machine. He's just so brilliant," Eldredge said. "I grew up next to Indianapolis, so my second team was always the Colts. That city loved him, and for him to leave and go to this new team after this injury and come back. I'm rooting for him."

"I think that the Patriots are always strong, but I don't know," he said. "I think Peyton's got some drive in him right now. It's like, 'I've got something to prove.'"

An athlete himself growing up, Eldredge played a multitude of sports in high school, leaning towards one in particular before making music his top priority.

"I grew up playing a little bit of everything. Baseball, football, basketball," he said. "I ended up quitting basketball and football, but I always stayed with baseball. I had my growth spurt, and ended up being this huge, tall guy," he added, with the singer's height topping out at six foot, five inches. "I probably should've stayed and played, I could've been pretty good. But I was out there focusing on trying to be a singer and learning that. I'm definitely better at music than I am at sports, but I can handle my own when we're out there on the road playing football outside the bus."

When asked which of his own songs would work best as "jock jams" for sports situations, he quickly responded with a couple of tunes for very specific situations.

"I want the cheerleaders to dance to 'Don't Ya' and 'Beat of the Music,' because those are both fun, grooving songs I think we can work in there," he mused. "I want the players to jam to 'Tell Me Where to Park,' which is the first song on the album and is kind of rocking. Maybe it's a defense song, like 'we're going to stop you and you're going to park right there in the grass because I'm going to knock you down.'"

Eldredge ended 2013 on a high note, being honored with "Brett Eldredge Day" in his hometown of Paris, IL, which will post a sign at the city limits in celebration of the local hero. He also performed on New Year's Eve in Nashville alongside the likes of Hank Williams Jr. and Blackberry Smoke at the Music City New Year's Eve Bash on Broadway.

Later on this month, Eldredge will join Keith Urban for the Canadian leg of his "Light the Fuse" tour with Little Big Town.