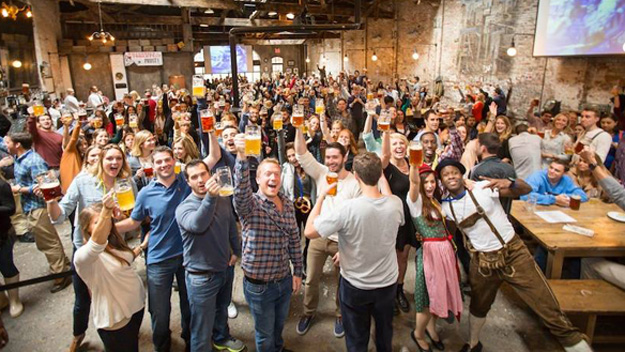 From Brooklyn to Queens, here are eight beer gardens that are worth visiting on National Beer Day (and beyond). By Carly Petrone.

More: The 5 Best Restaurants In Harlem

Head up to Harlem and grab a seat outdoors on the patio at Bier International. Sip on a full-bodied HB Hofbrau Original, or go for something light and fruity like the Reissdorf Kolsch. If you're with a group, try out the Kolsh tray, filled with 11 Kolsch Trangen (.21 glasses) or enjoy the Bier Grand Sampling – your choice of five draft beers. In the mood for something bitter? The Krusovice from the Czech Republic is a premium lager with a touch of bitterness, while the Delirium Tremens, from Belgium, is made with plenty of hops and pale malts to give it a bitter finish. Sip your brew from a Bier Stiefel (a beer boot glass) or a traditional stein.

Stop into Houston Hall in Soho and enjoy happy hour every weekday from 4 p.m. – 7 p.m. This includes half liter steins for just $6! They have a distinctive menu of draft beers like the Imperial Pumpkin (sunset orange, cinnamon, pumpkin, and clove), the Baltic Porter (dark and rich, chocolate, caramel, with a smooth finish), and the Imperial Saison (bright, golden, fruity, and spicy). Enjoy a rich beer like their Red Ale, made with rich toffee and roasted nut,  or go for something on the hoppier side, like their IPA. Don't forget to ask your server about their refreshing Halls Pale Ale – see which hop is on the menu. Pair your drink of choice with one of their famous giant soft Bavarian pretzels and call it a day.

More: The 5 Best Restaurants With A View Of Manhattan

Take advantage of Zeppelin Hall's giant patio in Jersey City this National Beer Day. This European style Biergarten has both indoor and outdoor space, as well as a delicious self-service restaurant that's serving up everything from Smoke Haus BBQ to specialty sausages. You're in luck if you're a bacon lover because every Thursday is BaconFest! Enjoy six different bacon dishes - plus bottomless bacon is available at the bar! Pair these tasty bites with a Belgian Style draught, Specialty Brew, Oktoberfest, or Hard Cider. Sip on a variety of IPAs like Bronx Session, Firestone Walker Union Jack, or Founder's Centennial IPA. Unsure? Let the bartender pick out four 5 oz. beers as part of your beer flight. Make friends at the community tables and catch up on whatever game is up on the big screen.

Make your way over to Brooklyn to check out all of the amazing beer available at Spritzenhaus. This large beer garden is the perfect place to celebrate National Beer Day because they always have seasonal beers on tap as well as beer and shot specials, like Dos Hombres for $6 (Mexicali and tequila shot) or the Red Beard for $6 (Full Sail Red and whiskey shot). Those looking for a gluten-free option are in luck! They're serving up four gluten-free brews from around the world. Try the Green's Amber Ale, Lammsbrau Glutenfrei, Dogfish Head T'weason'ale, or the Lost Tribes. They also have a variety of sour beers to choose from. Some of our favorites include the Fruli Strawberry Beer, Hanssens Artisanaal Oude Gueuze, and Prof Fritz Briem 1809 Berliner Weiss. Grab a seat at the bar or along the picnic tables and enjoy your pint/liter/stein of brew.

Have a seat at Radegast Hall & Biergarten in Williamsburg and enjoy their large beer menu as well as live music. National Beer Day falls on a Thursday, which is also the day they offer $6 half-liter specials – plus, you'll get a free bratwurst with every liter of daily special beer. Try traditional German and Belgian beer like Julius Echter Dunkel Weisse, Weihenstephaner Vitus, and Braufactum Progusta IPA. Fruitier options include the Aspall Dry Cider, Doc's Pear Cider, and the Timmerman's Pumpkin. You can also check out their food and beer combinations like their Palacinki with .5L Palm Ale (which happens to be the Thursday special from 4 p.m. – 8 p.m.). Prost!

If you work in midtown, then Bierhaus NYC is just a hop, skip and jump away! The best part? They're celebrating National Beer Day with a special: buy two liters of beer and get a free pretzel. Enjoy a half liter, liter, or two-liter boot of your choice of Original Hofbrau Premium Lager, Dunkel, Dunkel Weizen, or Hefe Weizen. Ask your server about season brews like the Munchner Sommer – a subtly bitter and refreshing lager – or the Maibock – Munich's oldest bock with a powerful, aromatic flavor. They're also serving up German liquor like Schonauer, Goldwasser, Obstler and more. Grab a seat and enjoy.

There aren't many beer gardens in New York that can say they are over 100 years old. Bohemian Hall and Beer Garden has bragging rights because they've been serving up classic brews and Czech food for over a century. Be a part of the tradition and sip on your favorite beer like Guinness, Blue Moon, Lagunitas IPA, and more. They've also got mugs and pitchers of Krombacher, Franziskaner, Czechvar, Spaten Oktoberfest, Schofferhofer (grapefruit beer), and plenty of other brews from around the world. Don't forget to try their potato pierogies, schnitzel, and other Czech favorite dishes.

Take a break from your High Line adventure or Meatpacking shopping excursion and enjoy a drink at The Standard Biergarten. Located below the Standard Hotel, you may feel like a tourist, but in the most metropolitan way. Enjoy the open air seating, a ping-pong table, as well as their variety of sausages (that are almost as popular as their beer menu). The Currywurst, a spicy pork bratwurst with curry, cucumber and potato, is a standout -- though, it's hard to go wrong with the Standard Bratwurst with homemade sauerkraut. Wash it all down with your choice of everything from Pilsners and Marzens to Hefeweizen and Schwarzbier. Just make sure you buy your beer tickets first.