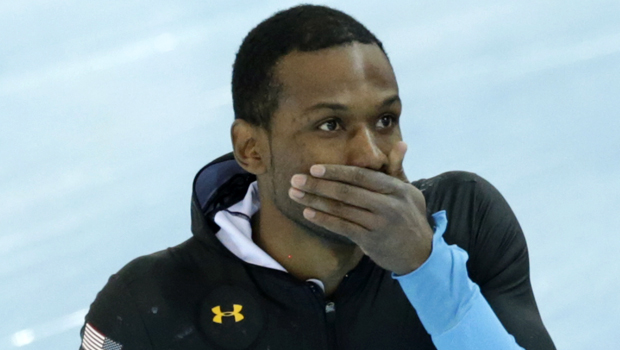 SOCHI, Russia -- Shani Davis walked away from his individual races at the Sochi Olympics empty-handed.

The four-time medalist finished 11th in the 1,500 meters on Saturday, another stunning result for the speedskater who had silver medals in the event from the last two Olympics.

In the 1,000 last Wednesday, Davis finished eighth, ending his bid to become the first male speedskater to win the same event at three straight games.

Davis skated his last individual race in Sochi wearing the Under Armour skinsuit he used during the World Cup season and at the U.S. Olympic trials in late December. He and the rest of the U.S. ditched the new high-tech suit developed by Under Armour and aerospace giant Lockheed Martin after failing to get on the podium through the first seven events at Adler Arena.

"Under Armour provided U.S. Speedskating with three different suit configurations in advance of Sochi, and we have full confidence in the performance benefits of each of them," U.S. Speedskating President Mike Plant said in a statement to CBS News Saturday. "We are constantly evaluating all aspects of race preparation and execution to help our athletes improve their output and maximize their physical and psychological advantages."

Davis said U.S. Speedskating "absolutely" should have delivered the new suits to the Olympic team before Jan. 1. The suits weren't competition-tested prior to the games.

"The best thing would have been to make sure that these suits were what the people said they were," he said, "so that we can actually know going into the races instead of finding out on one of the biggest races of our lives."

The 31-year-old from Chicago hadn't been worse than third in the 1,000 during the World Cup season. But he never threatened in Sochi.

"That changed my whole mentality of what I thought about skating, how I felt about myself, my confidence," he said. "Everything went down and I tried to build it up for the 1,500. But it's different when you can go into the 1,500 with a medal around your neck instead of going in there with an eighth-place finish."

By the time the 1,500 rolled around on Saturday, Davis said "the damage of the suit was already done."

He and the rest of the Americans had spent hours fretting about their poor results in the new Mach 39 suits, wasting mental energy that should have been focused on their races.

"It took its toll," he said. "I spent energy in ways that I wouldn't have done normally. I did as much as I could to get myself ready, but I felt defeated."

Davis wasn't even the fastest American in the 1,500.

Brian Hansen of Glenview, Ill., finished seventh in 1 minute, 45.59 seconds, equaling the highest finish on the U.S. team in Sochi. Heather Richardson was seventh in the women's 1,000.

"The results aren't dramatically better with this suit," Hansen said, "but part of our decision was that we had results and confidence from this skinsuit that we didn't have with the other skinsuit."

The U.S. will be a long shot to win any medals in the five remaining events, putting the Americans in danger of their third Olympic shutout and first since 1984.

"We have no medals, man. We have none, and the way things are looking we might not get any," Davis said. "It's sad because we've had a lot of potential, a lot of talent. It's terrible; big, big, big disappointment."
View CBS News In