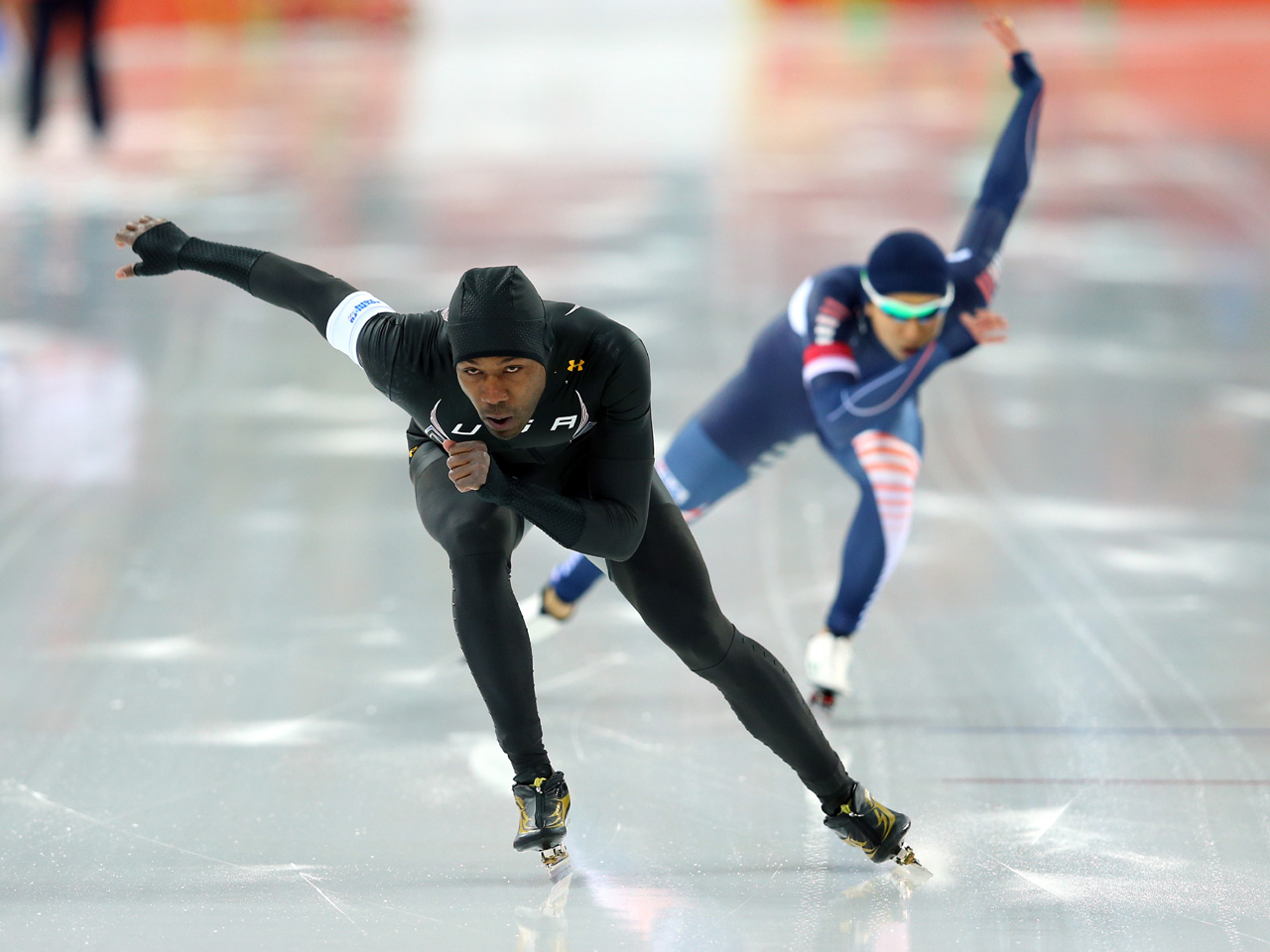 SOCHI, Russia -- The U.S. speedskating team is desperately trying to make sense of its miserable performance during the first week of the Winter Olympics - and much of the speculation has turned to a new high-tech skinsuit.

The secretive Under Armour suit was developed with help from aerospace and defense giant Lockheed Martin. The Americans unveiled the "Mach 39" just before arriving in Sochi, touting it as the "fastest speedskating suit in the world" and firmly convinced it would give them a big advantage over rival teams such as the Netherlands.

Instead, the Dutch are dominating, the Americans look like they're skating in quicksand, and everyone is wondering if the suit is actually a drag on performance.

CBS News' Danielle Elliot reported that Under Armour scientists visited the team's training facility in Salt Lake City and used a 3D image scanner to capture highly accurate digital measurements of the athletes from every angle.

The final design features strategically-placed polyurethane strips on the forearms, calves and forehead. These reduce drag by breaking up the airflow, just like the dimples on a golf ball. On the inside of the thighs, patches of ArmourGlide are said to reduce friction by 65 percent.

But after a podium-filled season on the World Cup circuit, no U.S. skater has finished higher than seventh through six of 12 Olympic events. Among those who have failed to perform up to expectations: two-time Olympic champion Shani Davis and female stars Heather Richardson and Brittany Bowe.

Team officials huddled in the stands after the women's 1,000 meters, trying to figure out what they can do to turn things around.

Friday was an off day at Adler Arena, giving the Americans some time to make adjustments.

"We're not doing very good," coach Kip Carpenter, a former skater and Olympic medalist, said bluntly. "Coming off one of our stronger fall seasons, we were expecting to take home a bunch of medals and lots of hardware. But we still have more opportunities. We're doing our best to stay positive and stay focused."

The suits have become a convenient target for explaining the American woes, since they were unveiled so late in the game, without giving the skaters a chance to wear them in competition. Even before the Olympics began, there was plenty of skepticism from the designer of the Dutch suits that the American technology would provide any sort of significant edge.

U.S. coaches scrambled to defend the suits, even while an effort was underway to get the International Skating Union to allow American skaters to switch back to their previously approved suits if they wanted.

"The evidence does not  suggest that the suits have contributed to the disappointing results to date," USA Speed Skating Executive Director Ted Morris said in a statement that was emailed to CBS News. "However, there are many factors that determine Olympic success and we are constantly making adjustments to improve results."

Under Armour also provided a statement from Kevin Haley, the Senior Vice President of Innovation. "While a multitude of factors ultimately determine on-ice success, many skaters have posted personal-best sea-level heat times, split times or race times this week, and we're rooting for that to translate into medals over these next couple of days," he said.

A team of Under Armour scientists is on site in Sochi, working with the athletes on any last-minute adjustments.

"Under Armour will continue to partner with USA Speed Skating throughout the Sochi competition to help ensure these incredible athletes are best positioned to skate with confidence and capture a spot on the podium," he said.

Richardson has already made some low-tech alterations to her new suit.

"They did adjust one part on the back, but it was just putting rubber over the mesh there," she said after a hugely disappointing performance in the 1,000, a race she dominated during the World Cup season. "It had no effect, really."

Davis was a two-time Olympic champion in the men's 1,000 and looking to become the first male speedskater to win the same event at three straight games. His eighth-place showing Wednesday was the first indication that something might be seriously wrong with the U.S. team's preparation.

Then, on Thursday, Richardson finished seventh and Bowe eighth over the same distance for the women, a stunning result given Richardson had won three World Cup events this season and Bowe took the other with a world-record time.

Next up is the men's 1,500. Davis is a two-time silver medalist in that race, but no one seems like a sure thing anymore.

"I'm optimistic," Davis said, trying to muster a smile after a workout Friday. "I didn't come all this way to start having doubts. I trained really hard. I'm focused. I'm feeling good. I'm going to go out there and do the best I can. That's all I can do."

When it came to the suits, he was more guarded with his words, sidestepping whether he would switch back to the old suit if allowed.

As a U.S. Speedskating media official tried to hustle Davis out of the mixed zone, he stopped to answer another question.

"It's not their fault," he told the official, indicating he didn't mind the reporters' questions on the suits, which clearly have become a major issue within the team.

Carpenter scoffed at the notion that the suits are the only reason for the American struggles.

"The human factor is by far the largest piece out there," he said. "There's not an athlete out there who is slowing down a second per lap because of the suit they're in. What is it: a parachute on their back? There are guys out there in low-technology suits. The Germans are out there ... in mostly Lycra suits with some rubber, and they're wiping us all over the place."

While the Americans haven't come close to the podium, the Dutch have captured 12 of 18 speedskating medals, including four golds.

"It could also be," said Michel Mulder, who led a Dutch sweep of the medals in the men's 500, "that they were just outclassed here."