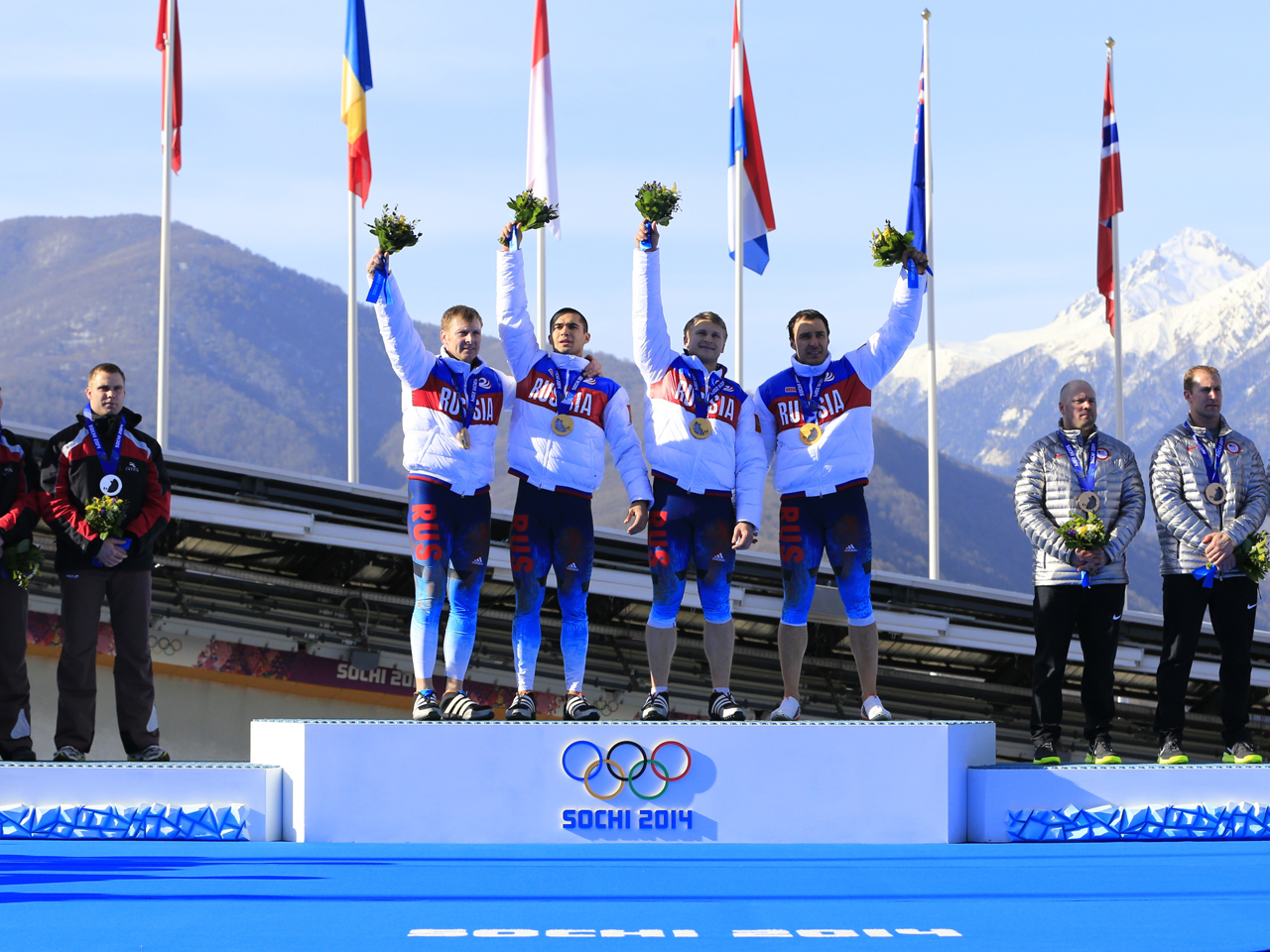 KRASNAYA POLYANA, Russia - Alexander Zubkov was given a daunting assignment for his home Olympics in Sochi. His task: Take to Russian ice and make history, against drivers who have been beating him for years.

He drove Russia to victory in the four-man bobsled race Sunday, adding that gold to his two-man from earlier in the Sochi Games and making him the sixth pilot to sweep those events at an Olympics. Until now, no one had ever achieved that feat on home ice, but this track was built for Zubkov and he proved to be its master.

So, history for Russia.

History for Latvia and the United States, as well.

Oskars Melbardis of Latvia drove to the silver medal, matching his nation's best showing in a Winter Olympic event. And 2010 four-man champion Steven Holcomb of Park City, Utah, piloted USA-1 to bronze, ceding his Olympic title but winning his third career medal - tying the most by any U.S. bobsledder - and giving his nation seven sliding medals at the Sochi Games, tops among all countries.

Zubkov had a slim lead entering Sunday's final two runs and predicted the title would be decided in the third heat.

Naturally, he was right.

The field - with just 0.17 seconds separating first through fourth places entering the day, the closest margin in Olympic four-man history - thinned out considerably in Sunday afternoon's opening run. Zubkov's lead over Melbardis swelled to 0.17 seconds. Melbardis opened up an 0.28-second edge over Holcomb for second place. Holcomb was 0.15 seconds better than Russia's Alexander Kasjanov in the race for bronze.

Zubkov, with push athletes Alexey Negodaylo, Dmitry Trunenkov, Alexey Voevoda in his sled, took one look at the standings after the leaders finished their third runs, clenched a fist and punched the air.

He knew it was over.

And a 39-year-old driver who hadn't won a single two- or four-man race all season on the World Cup circuit was soon declared perfect in Sochi. Zubkov wound up 0.09 seconds faster than Melbardis, who was 0.30 seconds up on Holcomb.

"I talked to Zubkov a couple years ago and asked him the first day he slid, and he told me he was 6 years old," said U.S. bobsledder Justin Olsen, a push athlete in the USA-2 sled piloted by Nick Cunningham that finished 12th. "So he's been sliding for 33 years. Holcomb's been sliding since 2001."

Holcomb was joined in the sled by Curt Tomasevicz of Shelby, Neb., Steve Langton of Melrose, Mass., and Chris Fogt of Alpine, Utah. For Tomasevicz and Langton, it was their second Olympic medals. Fogt won his first.

And it didn't come easily, with only 0.03 seconds separating third from fourth. But when the Americans crossed the line, a medal clinched, a big celebration began.

Ever since winning the gold in Vancouver, Holcomb has fought the notion that he's only good on North American tracks.

His bronze in Russia not only disproved that theory, again, but also ensured the Germans - perennially the world's the most powerful sliding team - would be shut out of the medals in four-man for the first time since 1968. Germany won five medals in luge at the Sochi Games and nothing else in any sliding discipline.