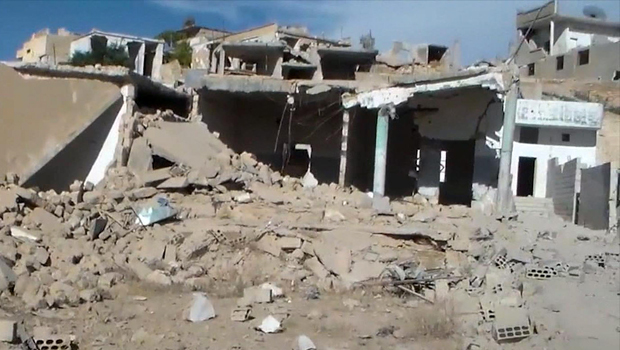 Recent Russian intervention in Syria raises a quandary for the U.S. about what it can do to resolve the conflict and whether it should risk allowing Syrian President Bashar al-Assad to increase his tenuous hold on power.

Putin has been building up Russia's military presence in Syria to support Assad, and that earned him a warning from President Obama at the U.N. General Assembly that Assad cannot stay.

"We must recognize that there cannot be, after so much bloodshed, so much carnage, a return to the prewar status quo," he said. But the president also pledged that the U.S. "is prepared to work with any nation - including Russia and Iran - to resolve the conflict."

Putin has painted Assad as a hero fighting the Islamic State of Iraq and Syria (ISIS). And on Wednesday, Russia began conducting airstrikes that were ostensibly targeting ISIS, but at least some appeared to have hit rebel areas not controlled by ISIS or groups linked to al Qaeda. There is concern they could be hurting the moderate Syrian opposition, which the U.S. hopes will overthrow Assad.

"Russian intentions are crystal clear: They're trying to reframe the narrative of what's happening in Syria to be about the legitimacy of Assad and the fight against terrorists," said CBS News Senior National Security Analyst Juan Zarate. "They're reinforcing and building Russian interests on the ground ...and they're reshaping the diplomacy such that all roads lead to Moscow."

Putin's boldness is hardly surprising, given the outcome in Ukraine after Russia annexed the Crimean Peninsula. Despite sanctions and condemnation from Europe and the United States, Russia remained unmoved, and Russian-backed separatists in Eastern Ukraine are still causing unrest. It was a demonstration, Zarate said, that Russia is "able to use military force to change the facts on the ground in a way that the U.S. is unwilling to confront or respond to."

But Zarate also said that the Russian military buildup in Syria and the airstrikes could force the president to clarify a Syria policy that has been muddled for years. Torn between its desire to see Assad removed from power and its fear about who might replace him, the U.S. has focused most of its attention on fighting ISIS and less of it on the civil war. Last month, a top general revealed that just four or five Syrian fighters in the U.S. train-and-equip program remained on the battlefield.

The Russians have put the U.S. in the position of having to "redefine a more muscular position to oust Assad, lest we fall into the Russian camp of supporting him," Zarate said. Put another way, the lack of a more aggressive strategy could effectively make it look as though the U.S. was legitimizing Assad's government. So in some ways, the Russians' more aggressive posture could result in more clarity, perhaps, Zarate suggested, "forcing us to be more clear and perhaps even more aggressive in trying to topple Assad."

Putin, he added, is "forcing us to put our money where our mouth is in terms of what we want in Syria."

Mr. Obama has yet to speak publicly about the latest Russian actions. White House Press Secretary Josh Earnest said Thursday that U.S. defense officials had spoken to their Russian counterparts for about an hour to talk about "ways the United States and Russia can communicate and effectively de-conflict our operations inside of Syria."

Asked whether there was any way the U.S. could protect the Syrian opposition, Earnest said "the burden here is on Russia." He argued it would be a "grave miscalculation" to target the moderate opposition and risk getting drawn into a sectarian conflict.

Zarate believes the U.S. should accelerate its own airstrikes inside Syria in order to challenge Russia "to consider what we're doing." He also said the U.S. should work with Turkey and its other allies in the region to create a no-fly and no-drive zone for refugees. And, he suggested, the U.S. should also be prepared for confrontation with Assad and his allies in the air or on the ground - and that could include the Russians.

But for now the White House is resisting any changes to its policy.

"At this point, we haven't seen the kind of change that would prompt a significant, broad reevaluation of our policy either with regard to Syria or with Ukraine," Earnest said.

Education was a lifeline for this Syrian immigrant. Now he's helping others.
More
Rebecca Kaplan