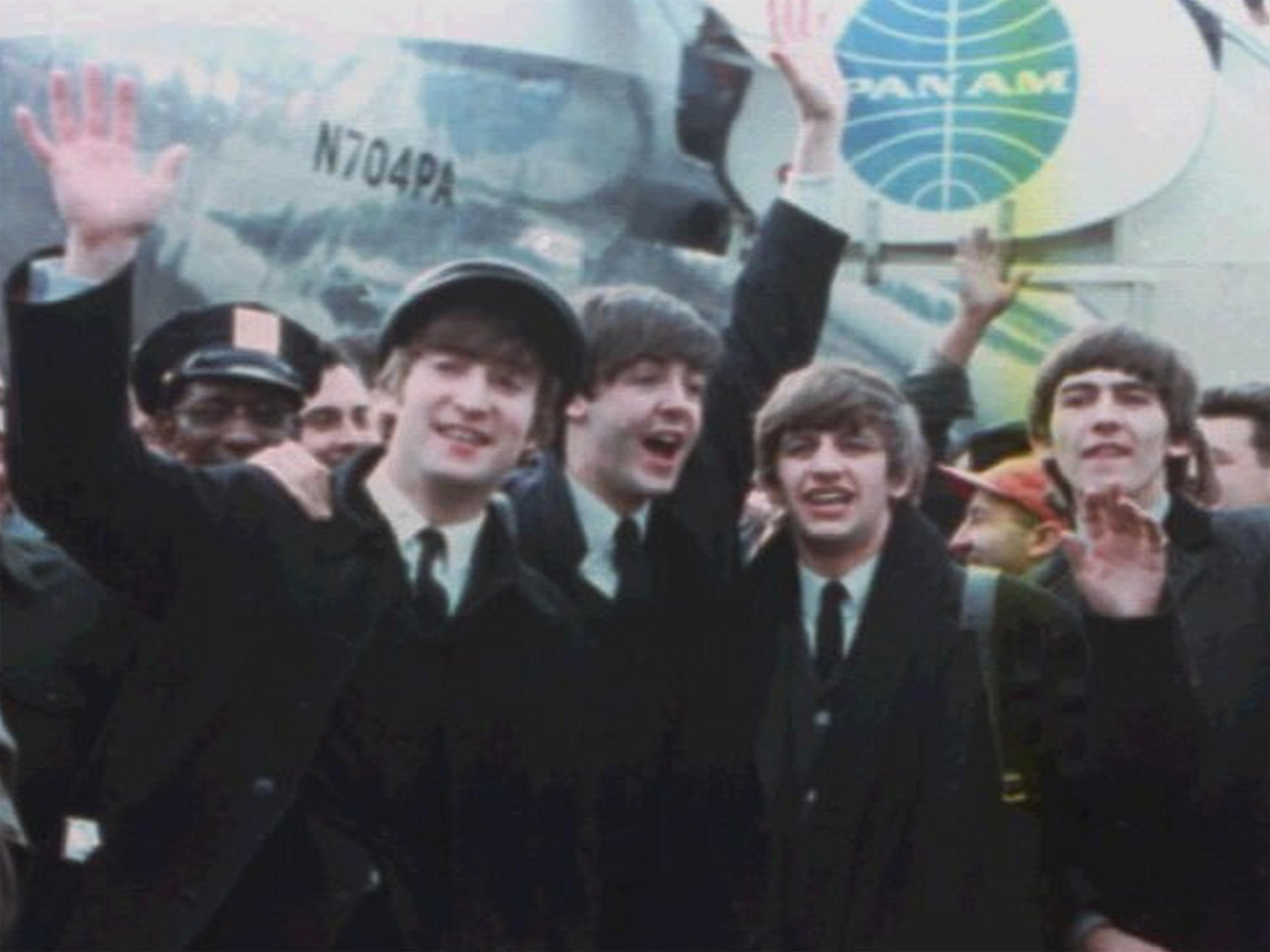 "Here Comes The Sun" is a song The Beatles recorded in 1969, not all that long before the end of road they traveled together. How that journey -- their "long and winding road" -- began for these four remarkable musicians is our "Sunday Morning" Cover Story is a report from Mark Strassmann:

Even half a century later, the sound is unmistakable . . . the sound of frenzied joy.

When John, Paul, George and Ringo stepped off the plane at New York's John F. Kennedy International Airport on Feb. 7, 1964, they had no idea they were making history.

Despite their reception, they were still a mystery to MOST of America, until two days later, when Ed Sullivan made the introductions: "Ladies and gentleman. . . The Beatles!"

An astonishing 73 million Americans tuned in that night -- nearly 40 percent of the U.S. population.

Some say that was the night the second half of the 20th century officially began.

"In a country in which popular culture is extremely important, there's probably nobody more important than The Beatles," said Steven Stark. "They changed more about both their discipline, and the other disciplines around them through that, than anybody else did."

Stark was one of the millions whose lives changed that night, so much so that 30 years later he moved his family from Boston to Liverpool to write a book about exactly how The Beatles changed everything.

"Rock music was not the soundtrack to a generation, it WAS the generation," Stark said. "It was the air, it was considered to be the central, and a revolutionary and new -- kind of the way the people think of the Internet is now -- communication force that would change everything. It would change our politics, our culture, our fashion, and The Beatles were the crown princes of this movement."

And they came along, Stark said, exactly when we NEEDED them.

In February 1964 America was a wounded country. President Kennedy had been assassinated in Dallas three months before. The Vietnam War was heating up. Civil rights clashes became street battles.

Nothing seemed to be going right.

"The country was in a collective depression, essentially," said Stark, "and to have these incredible fun and funny guys show up, almost from outer space -- which is about the equivalent of what England was in those days -- was incredibly energizing for people."

In the press conference, the great surprise is that they're fun, funny, and all very disarming.

Reporter: "I may be a little square but what does 'Beatles' mean?"
Ringo: "It means US!"
Paul: You've seen the little crawly things, haven't you? Well, we're BIG crawly things."

"And very intelligent," said Stark. "It's absolutely astonishing to the reporters. They're astonished at how erudite they were.

Reporter: "What have you seen best that you like about our country?"
John: "YOU!"
Reporter: "Which one are you?"
John: "I'm Eric."

Few people besides The Beatles themselves have more first-hand knowledge of that historic visit than Albert Maysles, the 87-year-old award-winning documentarian behind such classics as "Gimme Shelter" and "Grey Gardens."

"It's just amazing," Maysles said. "It's the experience all over again, every time I see it. I mean, it's wonderful. That's why I make movies."

In 1964 Maysles was just another little-known New York City filmmaker, when out of the blue, "I got a call one day from Granada Television saying that The Beatles are arriving in two hours: 'Would you like to make a film of it?'" Maysles recalled. "So I put my hand over the phone, I said to my brother, 'Who are The Beatles, are they any good?' And he said, 'Yeah, they're great, yeah.' So we both got on the phone, made the deal, rushed off to the airport in time to see the plane coming down."

For the next week he filmed every step of that first tour. It became his first documentary, "What's Happening: The Beatles' first U.S. Visit."

Maysles was with them as they arrived at the Plaza Hotel, where another crowd of screaming fans was waiting -- a crowd that included 13-year-old Irene Katz. Cameras were rolling while she and her friends cheered, immortalizing her memory.

"I had my sign, my girlfriend Laura had her sign," Katz recalled. "We were holding them up, because we were convinced we were going to be seen by The Beatles. They were going to look out that window, and pluck us from the streets, and make us their girlfriends!"

Strassmann asked, "What was it about the music originally that hit you?"

"It was just so different than anything I had ever heard," she replied. "They were very positive, very upbeat. I think it was a healing thing. Other people have said that before, I know. But it was just something that people needed. I particularly did. I didn't have a great relationship at home, and this was something that I could really embrace, and it made me just much happier."

Whatever fans were getting from The Beatles, it all starts with the songs. From 1962 through their breakup in 1970, they would write roughly 200 of them.

Then there were the films, the changing hairstyles, and most importantly, the ever-evolving music.

Hundreds of millions, and counting.

At the prestigious Berklee College of Music in Boston, professor Lauren Passarelli has taught the music of the Beatles for 15 years. "It's all Beatles all the time," she said of her courses. "There's a John Lennon course, 'The Music of John Lennon,' and then there's a 'Beatles harmony' class, and I teach a Beatles guitar lab. And then the Beatles ensemble -- try to get the whole class to play like The Beatles."

Year after year the classes fill up.

Last week, Berklee students and faculty performed The Beatles' "White Album" live in its entirety. They played to a packed house -- the magic in the music as strong as it was when it was first written.

"I think people recognize in The Beatles today, younger people, a feeling of hope and optimism that people miss," said Stark. "They miss the excitement of the time, the idea that you are on the ground making history is a very heady feeling, and they wish they had it."

And as for how many generations that might be, here's how John Lennon answered the question way back in 1964:

Reporter: "How long do you think Beatlemania will last?"
John: "As long as you all keep coming!"