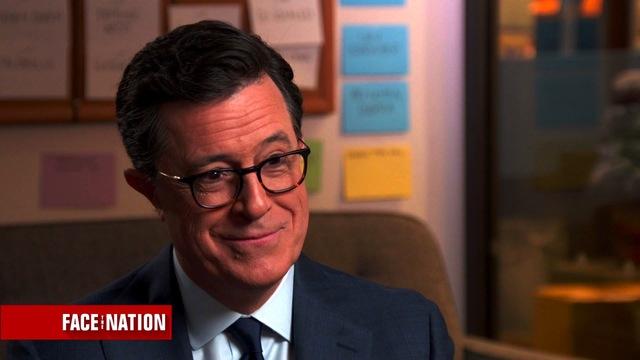 Everyone has to start somewhere. Stephen Colbert’s comedy career began with God, Visigoths and pig entrails.

The “Late Show with Stephen Colbert” host recalled the first two jokes he ever wrote in a wide-ranging interview with “Face the Nation” moderator John Dickerson:

“It was [the] fall of Rome, the Visigoths are pounding on the gate. The high priest goes into the temple to sacrifice     the animal to read the entrails…and all the people are screaming, ‘What’ll happen? What’ll happen, oh great one?’ They bring in the pig. They stake it out on the altar. They light the braziers. Poof, he takes up the ceremonial dagger.

“Again, first joke,” Colbert reminded Dickerson. “This is the second one:

“Guy commits suicide and goes to heaven. God meets him at the pearly gates. And the guy goes, ‘I’m so surprised.’

“And God goes, ‘Oh, people make a lot about that…Life’s hard, everybody at least thinks about it every so often…I’ve even thought about killing myself.’

“And the guy says, ‘Do you mind if I ask…why didn’t you go through with it?’

You can see more from our interview with Stephen Colbert here.