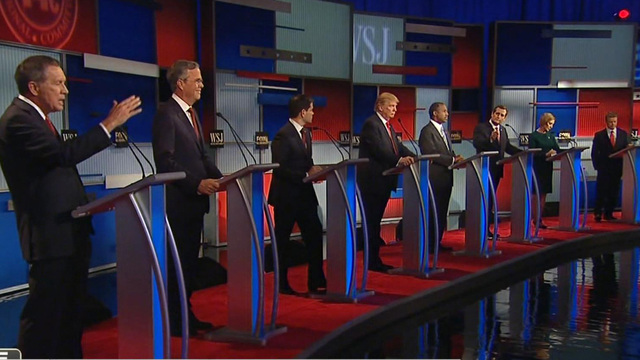 Now, with less than 50 days before the first voting contest in the 2016 presidential campaign, and going into Tuesday's last Republican debate of 2015, there is an onslaught of polls, and it can be difficult to make sense of it all.

In the last week a few Iowa polls showed Ted Cruz leading the GOP field, and a couple showed Donald Trump leading (he preferred to highlight the latter and attack the former).

Nationally, Donald Trump appears to have reached a new peak, with support in the 38-to-41-point range -- after his controversial proposal to temporarily ban Muslims from entering the U.S.

CBS News Elections Director Anthony Salvanto, who conducts polling in many states and leads the CBS Decision Team, offered some observations about what can be gleaned from the surveys released almost daily.

"National polls can be great measures of public mood or broad support for a candidate," he said, "But of course there is no national primary -- delegates are won state by state. And voters in those states can often be very different in their views or their makeup from voters nationwide."

Salvanto explained that this is "especially true in the early primaries and caucuses, whose voters can be more ideological -- either more conservative on the GOP side, or more liberal on the Democratic side -- than their fellow partisans nationwide."

Indeed, many of the people who participate in national polls may never have the chance to cast a meaningful vote because the nomination is usually decided well before several states weigh in. California, New Jersey, New Mexico, South Dakota and North Dakota won't cast a vote until June. In 2011, the RNC declared Mitt Romney the presumptive nominee on Apr. 25.

Salvanto suggests it's still too early to tell what the outcome will be in the Republican race. "People are kicking the tires on different candidates," he said. "We know people don't make up their minds until late" -- often until just before they vote. In Iowa, though, it's worth noting that the top tier of GOP candidates share similar attitudes toward policy -- all espouse strongly conservative positions.

Some of the differences in state polls could point to real political challenges for the candidates, Salvanto notes, pointing toward the sampling choices made by the pollsters, such as who they consider to be likely voters, or whether they use a list of all registered voters. Trump's support right now seems to include both the reliable voters and also many who haven't turned out before, suggesting his campaign needs to convert enthusiasm into action for a lot of them.

But overall, any poll at best only provides a snapshot of a race that is still changing on the Republican side. As the Washington Post pointed out, at this time in the race in 2011, Newt Gingrich and Mitt Romney were tied. In 2007, Rudy Giuliani and Hillary Clinton led the polls -- and neither of them ended up winning their parties' nomination.