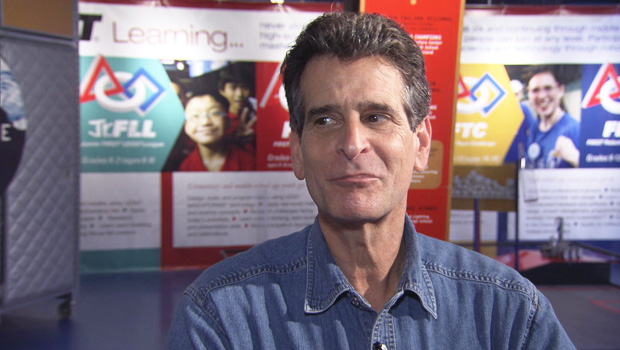 Victor Hugo, the 19th century French novelist, once wrote, "There is nothing like a dream to create the future." Well, as Erin Moriarty of "48 Hours" discovered, there are very few dreamers like Dean Kamen:

When most people think of inventor Dean Kamen, two things come to mind: The Segway, his personal transporter; and the headlines from 2010, which led some people to believe he had died.

It was actually British businessman Jimi Heselden, who tragically drove a Segway off a cliff in Northern England, less than a year after buying Kamen's invention. To clear things up, Kamen assured Moriarty that, yes, he is still healthy.

Which is a good thing, especially for the hundreds of millions of people throughout the world without access to clean water.


"Fifty percent of all chronic human disease would go away -- you would empty 50 percent of the hospital beds in the world -- if you just gave people clean water," Kamen said.

When Kamen sees a problem, he and his team of engineers based in Manchester, N.H., work to solve it. Hence, the Slingshot, a portable water purifier. Kamen says it removes anything -- pathogens, organics, inorganics, chrome, arsenic, feces.

It's named after the weapon the Biblical David used to deal with the problem of Goliath. As shown in a new documentary called "Slingshot," Kamen's team has already successfully tested a small number of these devices in villages in Latin America and Africa.

Clean water is created using just a tiny bit of electricity. The Slingshot runs on batteries, solar cells or even methane from animal dung. Still, at a cost of $100,000 each, Slingshots are too expensive to be practical. So Kamen has gone looking for partners, starting with Coca-Cola. The company that has the capacity to put vending machines nearly anywhere was first on board.

Moriarty asked, "You're not at all even a little bit uncomfortable in these small villages that you're producing clean water, but it's a big ad for Coca-Cola?"

"I think the Coca-Cola Company over time has made it very clear they weren't in this to sell Coca-Cola," Kamen replied.

The inventor who holds more than 400 U.S. and foreign patents describes himself as "a dyed-in-the-wool capitalist. Without making money, I couldn't do the things I do. Money gives you freedom; it gives you flexibility; it gives you resources to do things."

Royalties from his many inventions allow Kamen to employ 500 engineers and technicians at his company, DEKA Research -- employees who don't have to sell anything, they just create prototypes to solve problems.

When asked if he ever takes a vacation, Kamen said, "I don't play golf. I don't sit at the beach. I don't roam around places like a tourist. To me, a vacation is moving from one project to another."

At 63 years old, Kamen still has a childlike passion for all kinds of mechanical devices and toys, and lives in a massive dream home he designed not far from his headquarters. Not bad for a kid from Long Island, New York, who -- believe it or not -- struggled in school because of dyslexia.

"I don't read novels," he said. "I like reading old physics books and old math books, 'cause I can read a page of differential equations as quickly as I can read a comic strip."

He was still in college when he designed a device that led to the first wearable insulin pump for diabetics; and later, the first home Dialysis machine.

In 1990, he began work on a wheelchair to put the disabled on a whole new level. Kamen calls it the iBot: the eye-level robotic chair. "You're not looking down at somebody stuck in a chair," he said. "We're having a conversation. Getting around is important, but standing up is about dignity."

It took 15 years, and more than $50 million to mimic how we balance and manage to stay upright.

The iBot can negotiate curbs, and with some practice, even climb stairs. It's the same technology that led to his best known invention, the Segway. His personal transporter was introduced in 2001 with great fanfare as a replacement for the automobile, but it hasn't quite lived up to the hype.

Moriarty asked, "Are you at all disappointed a little bit that it hasn't caught on that way you had hoped?"


Waiting for the world to catch up with him hasn't stopped Kamen from barreling ahead on all kinds of fronts.

At the request of the military in 2006, Kamen came up with the Luke Arm, named for the fictional Luke Skywalker. To replace the hook, this is what Kamen dreams will one day be standard issue for injured soldiers. He demonstrated it for Moriarty, controlling he device with sensors on his feet. "I can rotate the wrist. I can flex the wrist.

"We can't play the violin, we can't throw a fastball, but we have users that will pick up chopsticks and eat sushi with this. [Or] pick up an egg and not crack it."

While the arm is designed for injured veterans, Kamen hopes to find other uses for the versatile appendage to bring down costs.

"It's unrealistic to give everybody everything at no cost," he said. "But when we as a country ask young people to go out, put themselves in harm's way, and lose their arms, those people do deserve whatever we can give them."

Always looking ahead, Kamen is also in search of the next generation of scientist -- like Aiden Hughes.

When Aiden was seven, he says, he dreamed of being a baseball player. Now he's 12, and in an entirely different kind of competition. Aiden and his teammates are part of FIRST, an organization that Kamen created 25 years ago to attract young people to science by offering them the opportunity to compete with robots of their own designs.

"This has really shown me how cool would engineering be if I were to go into that field," Hughes told Moriarty.

To date, more than a million kids from more than 80 countries have participated in FIRST competitions. Just last week, a live international webcast kicked off this year's competition.

Kamen, who never married or had children of his own, sees these budding scientists as his legacy, passing on to them not just a love of technology, but a lesson he learned from his own grandfather:

"'You give until it hurts. If it doesn't hurt, you didn't give enough,'" recalled Kamen. "So I said to my grandfather, 'All right, I will give more than I take.' But I've taken a lot. So if can work on water for the world, if I can work on medical products to make the world a better place, then I don't have to feel guilty being in this giant playground called the universe, doing all sorts of cool, fun stuff."