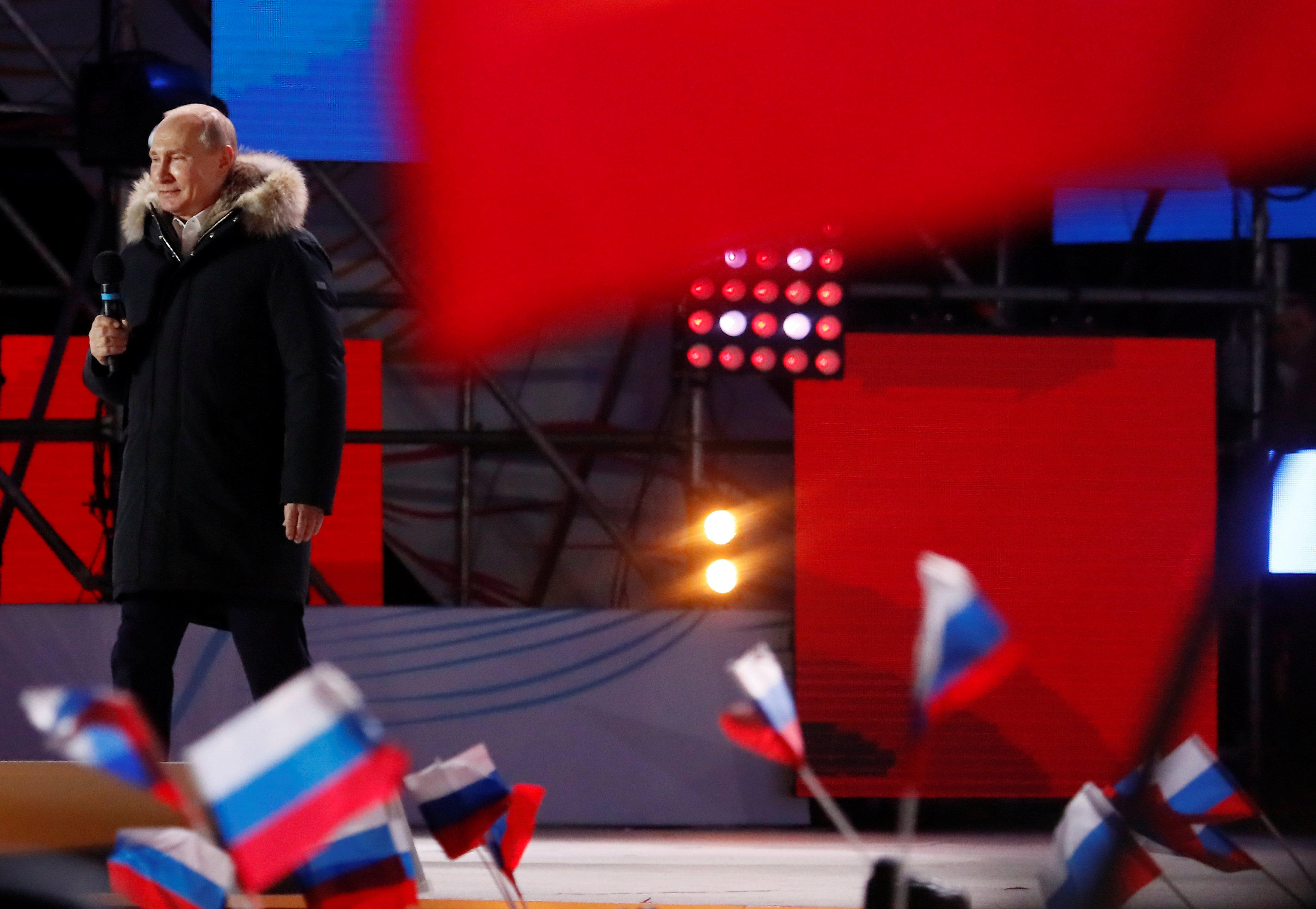 MOSCOW -- Russian President Vladimir Putin won a fourth presidential term with nearly 77 percent of the vote -- his highest score ever and a massive mandate to pursue his nationalist, assertive policies for another six years in power. Near-final results released Monday showed that the other seven candidates were far behind Putin in Sunday's voting.

Observers reported widespread ballot stuffing -- video emerged appearing to show people literally cramming ballots into boxes at polling stations, and there was unprecedented pressure on Russians to get out and vote.

But as CBS News correspondent Elizabeth Palmer reports, none of that is likely to have seriously altered the outcome of the vote. Nor are the reports of widespread fraud likely to seriously damage Putin's image, given his popularity and his tight control over Russian politics, and media. The outcome was never in doubt.

With 99.8 percent of the vote counted, the Central Election Commission said Monday that communist Pavel Grudinin came in a distant second with 11.8 percent. Third was ultranationalist Vladimir Zhirinovsky with 5.6 percent. The only candidate to openly criticize Putin during the campaign, liberal TV star Ksenia Sobchak, won just 1.6 percent.

Putin's most serious rival, opposition leader Alexei Navalny, was barred from the race.

The electoral commission said official turnout was 67 percent, but the figure was thrown into question by images circulating online of ballot stuffing and nationwide accounts of workers being coerced to vote.

Regardless, Putin now has a stronger hold on Russia -- and stronger place in the world -- thanks to the overwhelming mandate for yet another term as president.

His domestic opponents are largely resigned to another six years in the shadows. His foreign opponents are mired in their own problems, from Britain's messy exit from the European Union to chaos and contradiction in the Trump administration.

The accusations that he meddled in the U.S. election and sponsored a nerve agent attack in Britain have only bolstered his standing at home.

Palmer reports that after his big win, President Putin directly addressed the accusation from Britain that he was behind the attack on Russian exile and former double agent Sergei Skripal, using a powerful Novichok chemical nerve agent.

He called the allegation rubbish. But his campaign spokesman actually thanked Britain for helping Putin win so many votes.

U.K. Foreign Secretary Boris Johnson on Monday called Russia's ongoing denials of culpability in the attack "increasingly absurd," while in Moscow, a Kremlin spokesman said Britain would have to hand over its evidence "sooner or later," or apologize for the accusation.

Whenever Russia is accused of something, Palmer says, Russians unite around the center of their nation's power. For decades, that power has been embodied by Vladimir Putin, and for at least another term, it will continue to be.

Below is a look at what to expect from Putin's next six years in power, for Russia's rivals, neighbors and its own 147 million citizens.

Relations between Russia and the West are already at their lowest level since the collapse of the Soviet Union 26 years ago.

Despite a friendly-ish relationship with President Donald Trump, Putin's new mandate gives him little incentive to seek entente with Washington, especially as the investigation of alleged Russian interference in the 2016 U.S. election intensifies.

Putin-friendly leaders have made gains in recent Italian and German elections. Western countries are likely to see more Russia-linked hacking and propaganda aimed at disrupting elections or otherwise discrediting democracy -- including the U.S. midterm elections in November.

Since Putin's domestic popularity bumps whenever he stands up to the West, expect more tough talk from Putin the next time he faces threats at home, and bolder Russian vetoes at the U.N. Security Council of anything seen as threatening Moscow's interests.

Syria and the extremist threat

Russian-backed Syrian forces helped rout the Islamic State of Iraq and Syria (ISIS) from Syria, and Putin argues that Russia saved the day in a conflict that had confounded U.S.-led forces fighting against ISIS.

Now those Russian-backed Syrian forces are closing in on the last strongholds of Western-backed rebel forces.

Viewing that as a geopolitical and military victory over an illegal Western-led intervention, Russia is unlikely to pull out of Syria anytime soon.

An emboldened Putin could position the resurgent Russian military as a peacemaker in other regional conflicts -- for example in Libya, where Russia has oil interests and where a disastrous Western invasion seven years ago left a lawless state now seething with extremists.

To Russians, Putin's biggest victory in 18 years in power was annexing Crimea and crushing Ukraine's ambitions to move closer to the EU and NATO.

Putin is frustrated at the resulting U.S. and EU sanctions but appears unwilling to make concessions that would bring them to an end. Ukraine is split between a volatile government in Kiev and a Russia-backed separatist region stuck in a frozen but still deadly conflict that serves Putin's interests.

Moscow's actions in Ukraine sent a warning signal to other countries in Russia's orbit that reaching westward is dangerous. And former Soviet bloc states within the EU are increasingly drifting back toward Moscow, from Hungary and Poland to the Czech Republic and Slovakia.

Putin's new mandate could theoretically hand him the power to make bold reforms that Russia has long needed to raise living standards and wean itself from its oil dependence.

But Putin has convinced Russian voters that drastic change is dangerous, and that protecting the country from threats takes precedence over improving daily life.

Experts predict he may enact some changes like expanding affordable housing and fighting corruption on a local level.

But less likely are bigger changes such as overhauling the pension system, which is unpopular among a strong Putin voting base, or spending cuts in the security sector, unpopular among the ex-KGB friends in Putin's entourage.

Russia has weathered a two-year recession, and inflation and the deficit are low. But personal incomes have stagnated, the health care system is crumbling and corruption is rife.

The biggest question for Russians over the next six years is what happens after that.

Putin is constitutionally required to step down in 2024, but he could change the rules to eliminate term limits, or anoint a malleable successor and continue to run things behind the scenes.

Asked at an impromptu news conference Sunday night if he would seek the presidency again in 2030, when he would be eligible again, the 65-year-old Putin snapped back: "It's ridiculous. Do you think I will sit here until I turn 100?"

Opposition leader Alexei Navalny, Putin's most serious foe, will face further pressure from authorities as he works to expose corruption and official lies.

Other Putin rivals such as candidate Ksenia Sobchak and oligarch-turned-dissident Mikhail Khodorkovsky will try to gain a foothold through upcoming local elections and the parliament.

And members of Putin's inner circle will be jockeying for position for the day when he is no longer in the picture.

Putin may revive efforts to promote artificial intelligence and other innovation as part of a focus on the younger generation, whose loyalty he needs to ensure his legacy outlives him.