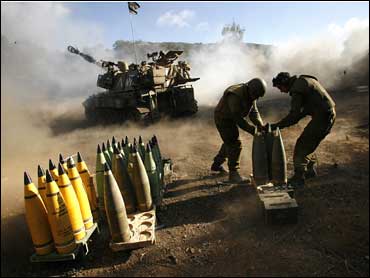 Iranian Red Crescent ambulances were used to smuggle weapons to Lebanon's militant Hezbollah group during its 2006 war with Israel, according to newly leaked U.S. diplomatic memos.

Hezbollah and Israel fought a 34-day war that killed 1,200 Lebanese and 160 Israelis.

According to one of the documents, a person whose name was not published "had seen missiles in the planes destined for Lebanon when delivering medical supplies to the plane."

The plane was allegedly "half full" prior to the arrival of any medical supplies, according to the memo.

A Hezbollah spokesman declined to comment, saying he had yet not read the document.

Iran, whose ties to Hezbollah date back nearly 30 years, allegedly funds the militant group, sending millions of dollars a year, and is suspected of supplying much of its arsenal.

The New York Times, which along with several European publications was provided advanced access to the documents, reported that they describe the United States' failure to prevent Syria from supplying arms to Hezbollah.

It said a week after Syrian President Bashar Assad promised a top State Department official that he would not send new arms to Hezbollah, the United States complained that it had information that Syria was providing increasingly sophisticated weapons to the group.

Syria, like Iran, is one of Hezbollah's strongest backers and much of the militant group's weapons are reportedly smuggled through Syria's long border. Damascus is also Iran's closest ally in the Arab world.

In the wake of the massive document dump by online whistleblower WikiLeaks and numerous media reports detailing their contents, Secretary of State Hillary Rodham Clinton was expected to address the diplomatic repercussions later Monday. Clinton may have to confront the fallout first hand after she leaves Washington on a four-nation tour of Central Asia and the Middle East - a region that figures prominently in the leaked documents.