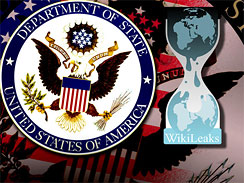 A leading Republican Congressman called WikiLeaks' release of secret U.S. State Department documents "catastrophic" which would make other governments question whether America can be trusted.

Rep. Peter Hoesktra, R-Mich., Ranking Member of the House Intelligence Committee, said the more than a quarter-million diplomatic messages released by the whistleblower organization and published by news media organization in the U.S. and Europe contain "a whole number of time bombs."

Appearing on CBS' "The Early Show" this morning, Hoekstra said the embassy cable messages and directives to diplomatic staff represents "a range of information getting into the public domain that was never intended to be there. Some of it is gossip, some of it is about the political sausage [-making] of getting to a deal."

And in the case of cables referencing Pakistan, some is "very, very sensitive negotiations between the U.S. and one of our allies, dealing with nuclear weapons and nuclear proliferation."

Hoekstra said that from what he has seen so far, there has been no single piece of information that is potentially catastrophic in terms of damage. But what he believes what is catastrophic about the leak is a breakdown in trust.

"There's just a lot of countries that are going to be out there, they are going to see stuff that they never thought was going to be public. It's now in the public domain, it's on the front page of the newspapers, it's all over TV, it's all over the Internet. They are just going to wonder: Can the U.S. be trusted? Can the United States keep a secret?" Hoekstra told anchor Harry Smith.

"A very, very awkward position, I would think, for diplomats to be put in," said Hoekstra.

He said that during his work on the Intelligence Committee, "the CIA has never really asked us to, you know, to spy on the people that we've been meeting with or those kinds of things, because they recognize that it may compromise our position as being a congressman. I think it does the same thing for diplomats - it compromises or potentially compromises their position and their relationship with the people that they work with."

Hoekstra said the fact that so much information was collected in a database to which "hundreds of thousands of people across the government" has access represents "a massive failure within the intelligence community.

"I think the real surprising thing here is that it never happened before," he added.