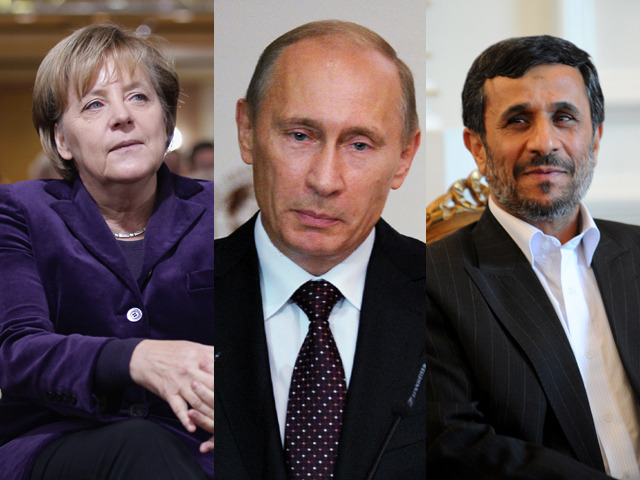 The latest batch of secret U.S. documents posted by the WikiLeaks group exposes diplomatic information never meant for public eyes. They include candid, less-than-complimentary U.S. intelligence assessments of its relations with key countries. And there are eye-raising anecdotes, such as Iranian President Mahmoud Ahmadinejad getting slapped in the face.

Below are some highlights mentioned in The New York Times, Germany's Der Spiegel, The U.K. Guardian and other news agencies that had early access to the documents.

Der Spiegel reports that although U.S.-Germany relations have improved with the arrival of German Chancellor Angela Merkel, but one intelligence assessment found the fence-mending to be half-hearted. Another referred to her as Angela "Teflon" Merkel.

In 2006, former US Ambassador to Germany William Timken wrote in a cable to the State Department the chancellor "has not taken bold steps yet to improve the substantive content of the relationship."

Der Spiegel details inside information given to Secretary of State Hillary Clinton about a heated moment at Iran's Supreme National Security Council.

An enraged Revolutionary Guard Chief of Staff Mohammed Ali Jafari allegedly got into a heated argument with Iranian President Mahmoud Ahmadinejad and slapped him in the face because, the Times reports, the generally conservative president had, surprisingly, advocated freedom of the press.

Another U.S. cable has this to say of Turkey's Prime Minister Recep Tayyip Erdogan, who in the U.S. view governs with the help of a cabal of incompetent advisors. Ankara Embassy officials depict a country on a path to an Islamist future -- a future that likely won't include European Union membership.

A 2008 cable from the Moscow embassy has an amusing take on the oft-discussed question of who really is in charge in Russia - President Dmitry Medvedev or his predecessor, former president and current prime minister Vladimir Putin.

In late 2008 the Moscow embassy wired back about the relationship between Russia's president, Dmitry Medvedev and the prime minister, Vladimir Putin, remarking that Medvedev, officially the senior partner, "plays Robin to Putin's Batman".

Another cable quoted refers to Putin as "an alpha dog" and Medvedev as "afraid, hesitant."

The U.S. embassy in Paris remarked on the "thin-skinned and authoritarian personal style" of French President Nicholas Sarkozy after it reported his tendency to repeatedly rebuke his team and the French prime minister, the U.K. Guardian reports.

The Times reports that in his many trips to Iraq, VP Joe Biden has to listen to a lot of "I told you so's" from Egyptian President Hosni Mubarek. Mubarek claims to have always known that the Iraq war was the "biggest mistake ever committed." Mubarek advises the Americans to "forget about democracy in Iraq." Once the US forces depart, Mubarak said, the best way to ensure a peaceful transition is for there to be a military coup. They are statements that add insult to injury.

The New York Times reports that American diplomats in Rome reported in 2009 on what their Italian contacts described as an extraordinarily close relationship between Vladimir V. Putin, the Russian prime minister, and Silvio Berlusconi, the Italian prime minister and business magnate, including "lavish gifts," lucrative energy contracts and a "shadowy" Russian-speaking Italian go-between. They wrote that Mr. Berlusconi "appears increasingly to be the mouthpiece of Putin" in Europe. The diplomats also noted that while Mr. Putin enjoys supremacy over all other public figures in Russia, he is undermined by an unmanageable bureaucracy that often ignores his edicts.

Press reports shed more light on the diplomatic flap last year when Libyan leader, Col. Muammar el-Qaddafi was not permitted to set up his tent in Manhattan or to visit ground zero during a United Nations session. The American ambassador to Libya told Colonel Qaddafi's son "that the Libyan government had chosen a very dangerous venue to express its pique," a cable reported to Washington.

Not every cable released is going to ruffle feathers. Der Speigel quotes American diplomatic cables that categorize Saudi Arabia's King Abdullah as a friend to the U.S. Abdullah reportedly can't stand the Iranian government or the mullah regime, and views them as "unstable."

The U.K. Guardain reports King Abdullah also has repeatedly urged the United States to attack Iran to destroy its nuclear program. Leaked U.S. diplomatic cables that describe how other Arab allies have secretly agitated for military action against Tehran.

The New York Times summarizes meetings in 2009-10 between American officials and Ahmed Wali Karzai, the half brother of the Afghan president and a power broker in the Taliban's home turf of Kandahar.

While the meetings were, on the surface, cordial, diplomats added this note: "While we must deal with AWK as the head of the Provincial Council, he is widely understood to be corrupt and a narcotics trafficker."

A cable in Feb. 2010 said Mr. Karzai "demonstrated that he will dissemble when it suits his needs ...He appears not to understand the level of our knowledge of his activities. We will need to monitor his activity closely, and deliver a recurring, transparent message to him" about the limits of American tolerance.