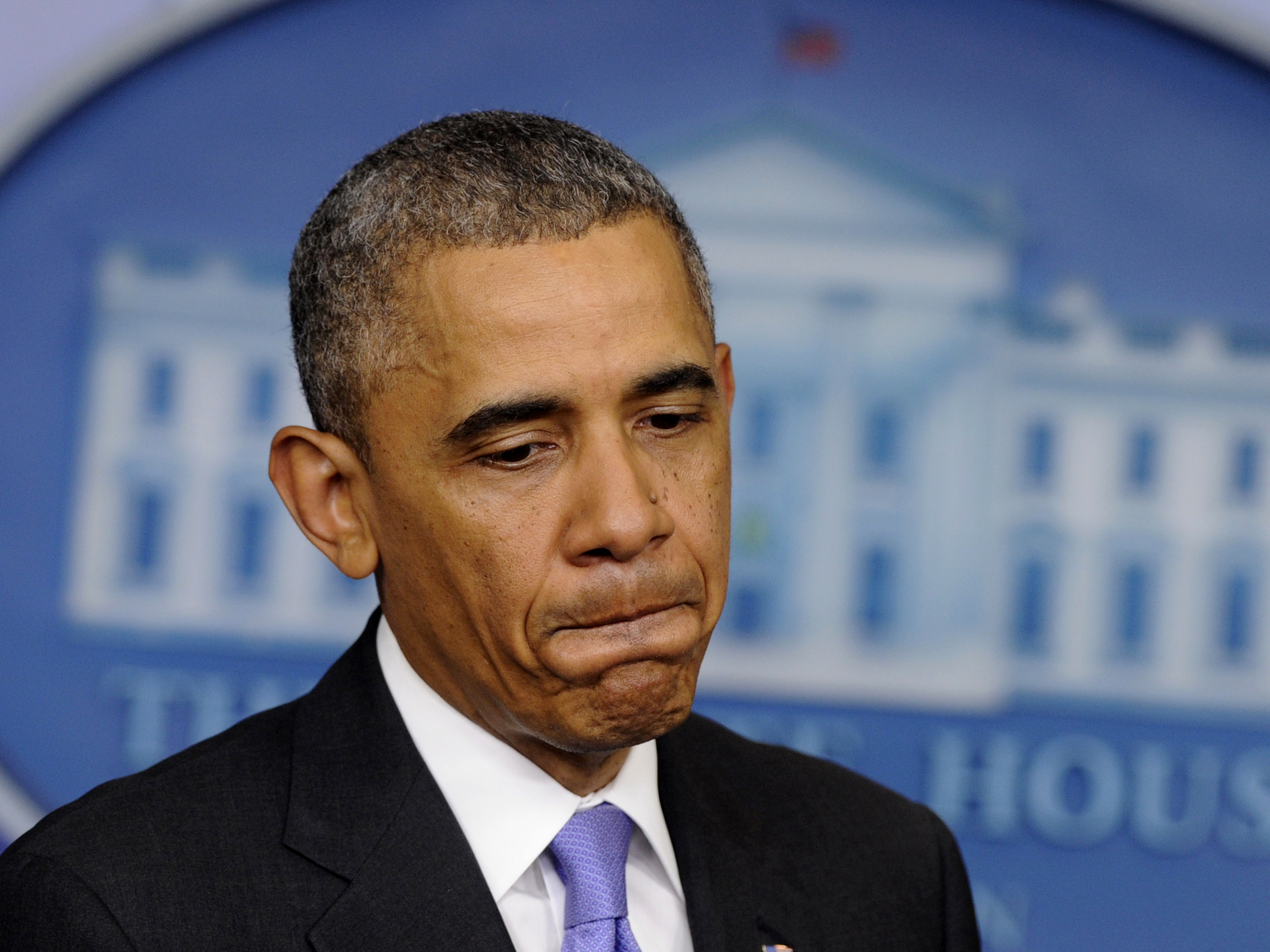 Under pressure to respond to the growing scandal at Veterans Affairs (VA) hospitals across the country, President Obama addressed the issue for the first time in three weeks Wednesday, saying he "will not tolerate" any misconduct at the facilities that serve the nation's veterans.

"When I hear allegations of misconduct, any misconduct -- whether its allegations of VA staff covering up long wait times, or cooking the books - I will not stand for it. Not as commander in chief but also not as an American. None of us should," the president said. "If these allegations prove to be true it is dishonorable, it is disgraceful, and I will not tolerate it, period."

The president did not announce any further firings in relation to the scandal, however, and indicated he will wait for the results of multiple investigations into the allegations of long wait times and ensuring cover ups to conclude before taking any further action.

VA Secretary Eric Shinseki is working on a nationwide review of patient access to care, and is expected to give the president preliminary results early next week. And Mr. Obama's deputy chief of staff, Rob Nabors, is conducting a broader review of what is and is not working within the VA, along with specific recommendations on how they can improve. That report is expected next month, Mr. Obama said.

"We are going to fix whatever is wrong and so long as I have the privilege of serving as commander in chief I am going to keep on fighting to deliver the care and the opportunities and the benefits that you and your families deserve," Mr. Obama said directly to the nation's veterans. "That is a commitment to which I feel a sacred duty to maintain."

He is also standing by Shinseki, with whom he met this morning.

"Rick Shinseki has been a great soldier, "the president said. "Nobody cares more about our veterans."

The American Legion, the nation's largest veterans group which had called on Shinseki to resign, was disappointed with that decision even though they praised the president for committing to accountability.

"The VA has been aware for some time that inappropriate scheduling procedures are widespread among its medical facilities. Yet Secretary Shinseki has taken no initiative in correcting the problem. Veterans continue to die waiting for their health care, senior VA executives continue to get their bonuses, and only after all of this is the secretary now pledging to fix what's wrong," American Legion National Commander Daniel Dellinger said in a statement. "Words are nice, and even somewhat comforting, but when will the VA's house be cleansed of those who are soiling it and dishonoring the system?"

But another major veterans group, the Veterans of Foreign Wars (VFW) issued a statement through National Commander William Thien that said, "They were the right words, and we share the president's urgency to fix what's broke, to hold people appropriately accountable, and to restore faith in the VA."

Republican leaders on the Hill, including House Speaker John Boehner, R-Ohio, and Senate Minority Leader Mitch McConnell, R-Ky., said the president's remarks were both long overdue and insufficient given the scale of the problem.

"According to the latest reports, 26 VA facilities nationwide are now being investigated, and this Administration's ineffectual response has created a crisis of confidence in our veterans' community. We need answers, leadership and accountability, none of which we've seen from the Obama Administration to date," he said.

Until now, administration officials have shied away from directly addressing the allegations of mismanagement and secret waiting lists that have percolated, instead trying to point to steps the president has taken to improve the VA, including increasing its operating budget and expanding the criteria for veterans eligible for disability benefits. A report on the agency's budget history shows it grew by more than $20 billion during Mr. Obama's first two years in office.

But the gains seemingly fail to live up to pledges the president made in August 2007, when then-candidate Obama spoke to the VFW and promised, among other things, to fully fund the VA with on-time budgets each year, remove means testing that had led the agency to turn away veterans, modernize medical recordkeeping and improve care and treatment.

"No veteran should have to fill out a 23-page claim to get care, or wait months -- even years -- to get an appointment at the VA," the president said then. "When we fail to keep faith with our veterans, the bond between our nation and our nation's heroes becomes frayed. When a veteran is denied care, we are all dishonored."

Mr. Obama hasn't spoken publicly about the scandal since April 28, when he told reporters that he had immediately ordered Shinseki to begin investigating the claims, and that he was interested in working with "everybody" from veterans organizations to Congress to ensure that the needs of all former service members are met, whether it is housing, employment or health care.

"I believe that if somebody has served our nation then they have to get the benefits and services that they have earned. And my budgets have consistently reflected that. That's why we've resourced the Veterans Affairs office more in terms of increases than any other department or agency in my government," Mr. Obama said.

Since then he's been silent on the issue, letting Shinseki and White House officials speak publicly, even as pressure has mounted on Shinseki from both lawmakers and veterans organizations to resign. Through White House Spokesman Jay Carney and Chief of Staff Denis McDonough, Mr. Obama has indicated he stands by Shinseki's decision to stay in the job and complete the VA's nationwide review of patient access to care he ordered on May 8.

Shinseki, a retired four-star Army general who has led the VA since 2009, similarly testified before Congress last Thursday that the reports about the Phoenix hospital made him "mad as hell" and promised to take all necessary steps to fix the situation. Like the administration, however, he has urged that the VA and its Office of the Inspector General (OIG), the agency's internal watchdog, be given time to complete their reviews.

Members of Congress have been less inclined to wait given the preponderance of evidence of wrongdoing that has accumulated over the last decade.

"We have more than allegations at this point, we have evidence, solid evidence, of wrongdoing within the VA system," Sen. Richard Blumenthal, D-Conn., said at the hearing. "It 's more than an isolated incident -- it's a pattern, apparently, of manipulating lists, gaming the system... which is not just an impropriety or misconduct, it is potentially a criminal act."

And the issue of long wait times - and possible efforts by VA facilities to conceal them - is not a new one. Reports indicate that the Obama administration was informed the VA might be concealing the true amount of time veterans waited for care as early as his presidential transition at the end of 2008. The nonpartisan Government Accountability Office reported on evidence of VA wait time failures as far back as 2000, while the Office of the Inspector General at the VA (the agency's internal watchdog) looked at this problem in 2005, 2007, and again in 2012.

A top VA official, Robert Petzel, handed in his resignation on May 16, although critics were quick to note that he had already announced his intention to retire earlier this year. But McDonough told Garrett that Petzel was instructed to leave, "before he was planning to go."

Mr. Obama had come under increasing pressure himself in recent days to address the scandal publicly. "He needs to make a statement to show the employees of VA that this needs to change now. One death is tragic. But when you hide it, that's unforgivable," American Legion National Commander Daniel Dellinger said on CBS' "Face the Nation."