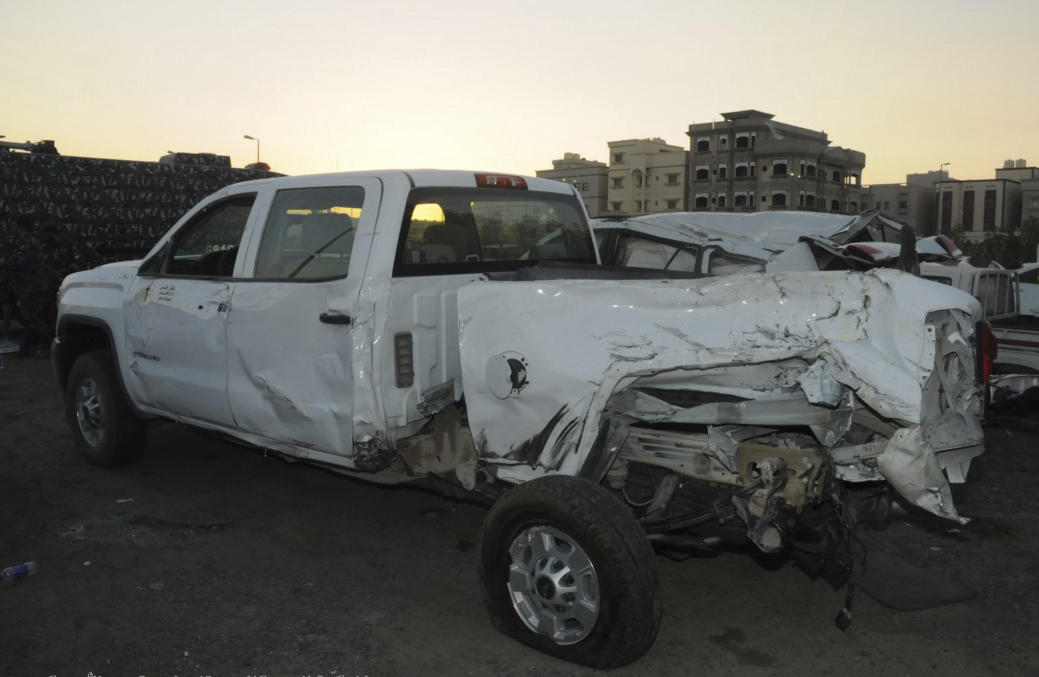 KUWAIT CITY - The U.S. Embassy in Kuwait says American soldiers deployed in the Gulf country who were intentionally rammed by an Egyptian man pulled their attacker from his burning vehicle after it caught fire.

The embassy on Sunday described the incident on a Kuwaiti highway a day earlier as “an attempted terrorist attack.”

The attempted attack is the first by the Islamic State of Iraq and Syria (ISIS) to target American troops in the tiny, oil-rich emirate that’s a stalwart U.S. ally. It comes as authorities already increased security ahead of a major Shiite commemoration in the coming days.

It says three uniformed American military personnel were in the truck that was rammed, and all escaped uninjured. It did not say where the troops were stationed, but American forces are deployed to Kuwait’s Camp Arifjan.

It was not immediately clear if the Egyptian had a lawyer. The ministry did not offer a location for the failed attack, though it published pictures of the aftermath of the crash showing a wrecked garbage truck, as well as items it described as a suicide belt loaded with shrapnel. The white pickup truck apparently carrying the soldiers had the left side of its bed smashed in.

American forces and others have troops stationed at Kuwait’s Camp Arifjan. The U.S. military’s Central Command referred a request for comment to U.S. Army Central, based in both South Carolina and Kuwait. The Army did not immediately respond, while the U.S. Embassy in Kuwait City had no immediate comment.

Kuwait is a solid U.S. ally following the 1991 American-led Gulf War that ended the Iraqi occupation there. Terror attacks are rare in the emirate, where Shiites and Sunni Muslims largely live in peace.

An ISIS-claimed suicide bombing in 2015 targeting a Shiite mosque in Kuwait City killed 27 people and wounded scores. The extremist group, which holds territory in both Iraq and Syria, did not immediately claim the failed assault Saturday, though the Interior Ministry described Sulaiman as having “paper in his handwriting indicating he had adopted terrorist thought and had pledged allegiance to the group.”

Such attacks on U.S. forces are incredibly rare in Kuwait. In 2003, a former U.S. Army sergeant named Hasan Akbar in the 101st Airborne Division threw four hand grenades into tents in Kuwait as members of his division slept, then fired his rifle at soldiers in the ensuing chaos in the early days of the American-led invasion of Iraq. He was sentenced to death for killing two soldiers and wounding 14.

Earlier in 2002 ahead of the invasion, a U.S. Marine was shot dead and another wounded in an attack by Islamic extremists in Kuwait, while a police officer later shot and wounded two other American soldiers.

The reported failed attack comes ahead of the Shiite commemoration of Ashoura, which marks the death of Hussein, the grandson of the Prophet Muhammad, at the Battle of Karbala in present-day Iraq in the 7th century.

Kuwaiti police have promised increased security ahead of Ashoura. Two Iranians were arrested in recent days for taking “suspicious” photographs ahead of the commemoration.