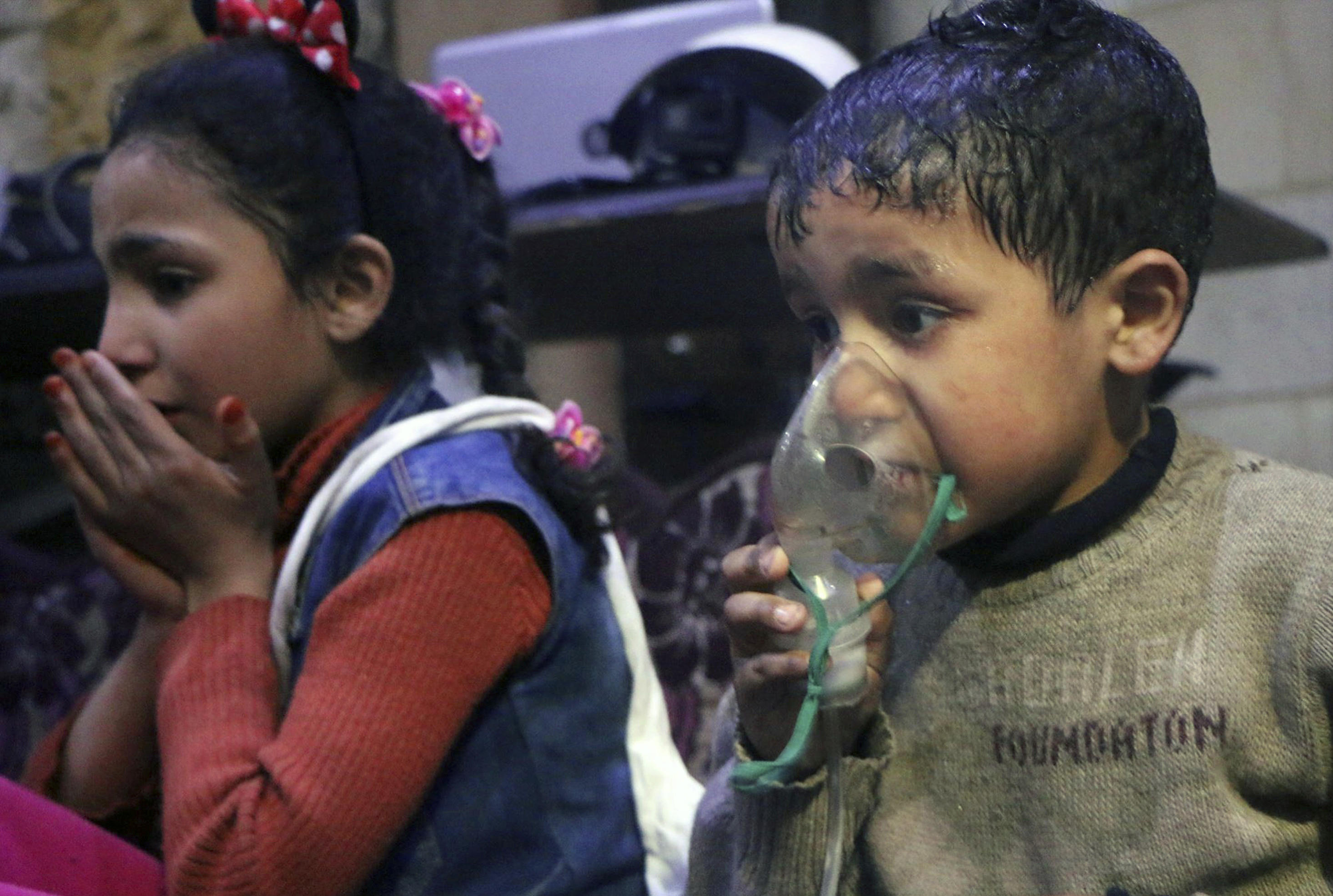 NEW YORK -- The U.N. Security Council held an emergency meeting Monday to discuss the suspected chemical attack in Syria. The attack killed at least 40 people, including families found in their homes and shelters, opposition activists and local rescuers said.

The attack on the besieged town of Douma came almost exactly a year after a chemical attack in the northern Syrian town of Khan Sheikhoun killed dozens of people.

The U.S. is urging the council to adopt a new resolution that would condemn the continuing use of chemical weapons in Syria "in the strongest terms" and establish a new body to determine responsibility for chemical attacks.

The draft resolution, obtained Monday by CBS News, singles out Saturday's attack on Douma in the Damascus suburbs, and expresses "outrage that individuals continue to be killed and injured by chemical weapons" in Syria and "determination that those responsible must be held accountable."

It was circulated ahead of Monday's emergency Security Council meeting.

During the meeting, U.S. ambassador to the U.N. Nikki Haley said it seemed pointless to once again share photos of children killed in chemical attacks because such images no longer have an impact on council members. She said those who carry out these attacks are "monsters."

"Now, here we are, confronted with the consequences of giving Russia a pass in the name of unity. Here we are in a world where chemical weapons use is becoming normalized," Haley said. "This council does nothing. What we are dealing with today is not about a spat between the U.S. and Russia."

"There can be no more rationalizations for our failure to act," she continued. "Our priority must be to help the starving, the sick and the injured who have been left behind ... The international community must not let this happen. We are beyond showing pictures of dead babies. We are beyond appeals."

After a bitter debate full of recriminations and threats in open chamber, Security Council diplomats went into closed-door consultations to see if there was anything to salvage from the three proposals on a way forward, CBS News' Pamela Falk reports from the U.N.

"The United States is pushing for a vote tomorrow," a Security Council diplomat told CBS News.

"The U.S. position was that they were negotiating in good faith but the world is watching for the Council to act... The U.S. said it took many of Russia's concerns into account with its draft and was ready to work with all council members to find consensus on this issue, but that we need to move quickly," the diplomat said.

Russia's Deputy Ambassador Dmitry Polyanskiy told CBS News that the experts were negotiating until late at night, "But pushing for vote, isn't pushing for the result."

Diplomats leaving the meeting agreed that protection of civilians and an inspection of the site were the highest priority, along with assigning blame, Falk reports, in order to stave off a military confrontation.

Russian Foreign Minister Sergey Lavrov on Tuesday said that Russia would submit its own resolution to the U.N. Security Council to propose that international inspectors, including from the chemical weapons watchdog agency, OPCW, visit the site of a suspected chemical weapons attack in Douma. A Security Council diplomat confirmed that there was no merger of the U.S. and Russian drafts overnight and the rival resolutions are now before the council.

On Tuesday, the watchdog agency said it was preparing to deploy a team to Syria "shortly."

Peru's Ambassador Gustavo Meza-Cuadra, as President of the Council emerged from the Council to tell reporters that the experts would be working to make a consensus document.

President Trump blamed Syrian government forces for what he called a "mindless CHEMICAL attack" and warned that there would be "a big price to pay." He said Monday morning that he would decide on a potential military response within 24 to 48 hours.

The Russian military's Reconciliation Center in Syria said it has sent officers into Douma to negotiate with the rebels there. It says experts inspected the areas in Douma where chemical agents were allegedly used and found no trace of them. They also inspected Douma's hospital and found no patients with chemical poisoning symptoms.

The White House said Monday afternoon that the U.S. is "very confident" that the Syrian regime is behind the apparent attack.

The Russian military denounced the White Helmets, opposition-linked first responders who reported the attack and the death toll. It called them "shameless rebel accomplices," saying they made false allegations to derail a local truce.

Russia is a key ally of President Bashar Assad and has been waging an air campaign in support of his forces since 2015.