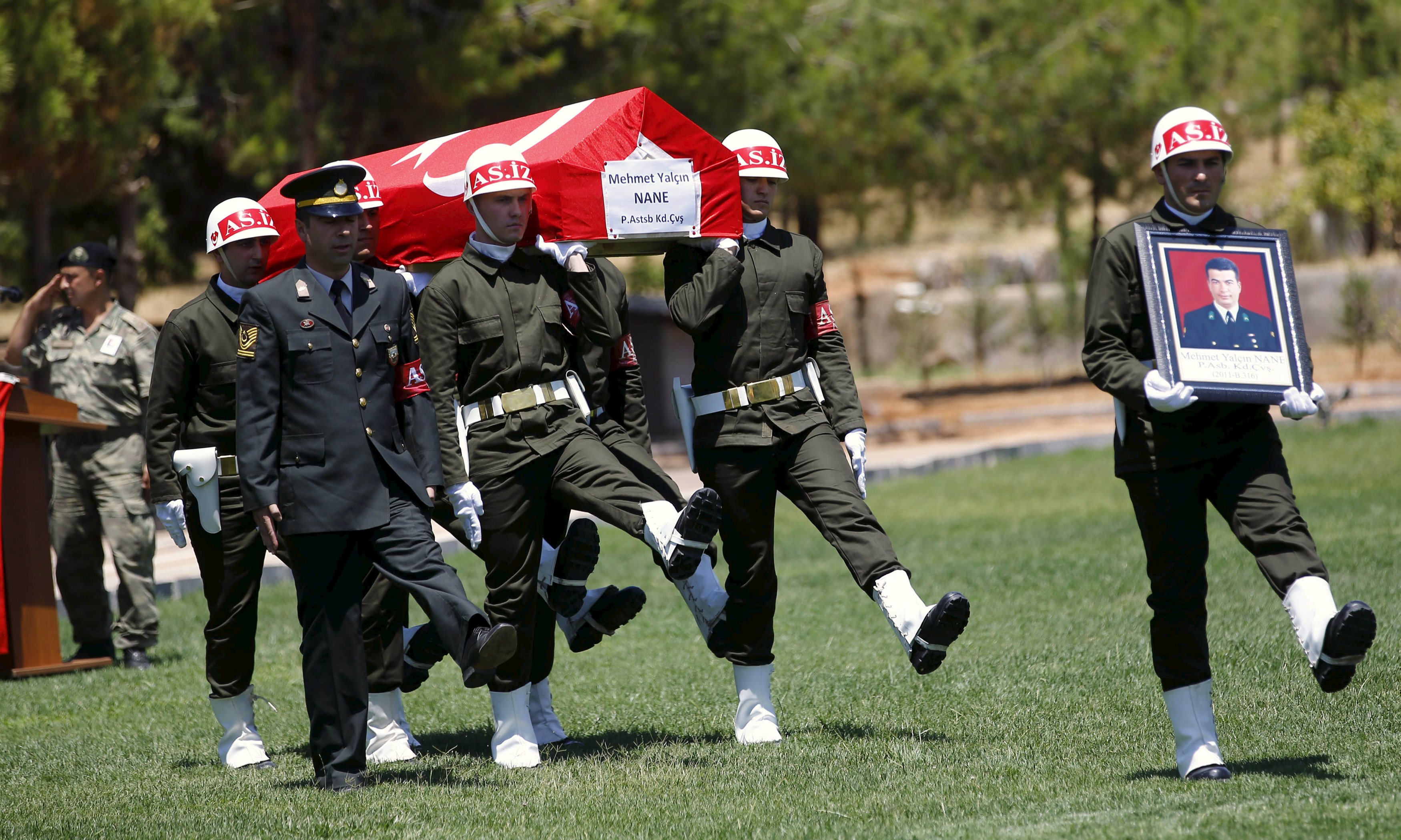 ANKARA, Turkey -- In a major tactical shift, Turkish warplanes struck Islamic State of Iraq and Syria (ISIS) targets Friday across the border in Syria, Turkish officials announced -- a move that came a day after ISIS militants fired at a Turkish military outpost, killing a soldier.

Turkey, which spans the intersection of Europe and Asia and borders the Middle East, had long been reluctant to join the U.S.-led coalition against the extremist group.

In a related, long-awaited development, President Recep Tayyip Erdogan confirmed that Turkey had agreed to let the U.S. use a key base in southern Turkey for military operations against the militants "within a certain framework." He did not elaborate on the agreement, which a U.S. official said was reached during a phone call this week with President Obama.

Prime Minister Ahmet Davutoglu said the airstrikes Friday had "removed potential threats" to Turkey, hitting their targets with "100 percent accuracy." He did not rule out further airstrikes, saying Turkey was determined to stave off all terror threats against it.

CBS News correspondent Holly Williams says Turkey has been pressured for years to try and stem the flow of foreign fighters and weapons through its territory into Syria.

"This was not a point operation, this is a process," Davutoglu said. "It is not limited to one day or to one region ... the slightest movement threatening Turkey will be retaliated against in the strongest way possible."

For their part, Turkish police launched a major operation Friday against terror groups including ISIS, carrying out simultaneous raids in Istanbul and 12 provinces and detaining more than 290 people.

A government official said three F-16 jets took off from Diyarbakir air base in southeast Turkey early Friday and used smart bombs to hit three ISIS targets. The official, who spoke on condition of anonymity because of government rules requiring authorization for comment, said the targets were two command centers and a gathering point for ISIS supporters.

Davutoglu said Turkish planes did not violate Syrian airspace on Friday, but he did not rule out incursions in the future. He denied news reports claiming that Turkey had told the Syrian regime about the airstrikes, but said it had contacted NATO allies before the operation.

Rami Abdurrahman, who heads the Britain-based Syrian Observatory for Human Rights said the three Turkish airstrikes were all near the border, ranging from 200 yards to 2.4 miles inside Syria. He said the airstrikes targeted vehicles for the extremists as well as an ISIS gathering point, with one strike hitting just north of the Syrian border village of Hawar al-Nahr.

Abdurrahman said several ISIS fighters were killed in the airstrikes but much less than the 35 reported by Turkish media.

ISIS "is imposing a blackout on its losses, although there aren't large losses," Abdurrahman told The Associated Press by telephone.

The agreement on Incirlik followed months of U.S. appeals to Turkey and delicate negotiations over the U.S.-led coalition using Incirlik or other bases. When asked about the accord Friday, Davutoglu said an agreement that takes Turkey's concerns into account had been reached, but did not elaborate.

Citing operational security, the White House declined to confirm the agreement, but noted that President Obama and Erdogan had agreed to "deepen our cooperation" against ISIS in their call Wednesday.

CBS News' Williams said use of Incirlik will make it much easier for the U.S.-led coalition to launch strikes against ISIS, given its position just 60 miles from the Syrian border.

As Williams reports, the Turks' turnaround comes at the end of a week in which the Syrian civil war has spilled violently into Turkey. A suicide bomber reportedly linked to ISIS killed more than 30 people in the Turkish town of Suruc, close to the border on Monday, and on Thursday, the Turkish military said five ISIS gunmen fired at a Turkish border post, killing a soldier.

In another sign that the Turks have recognized the threat from ISIS is no longer contained within Syria, Williams said the government announced Thursday that it would build a wall along part of the frontier with its southern neighbor.

A government statement said the airstrikes were approved at a meeting Thursday after the attack on the military outpost.

The state-run Anadolu Agency said as many as 5,000 police officers were involved in Friday's sweep against suspected extremists, which was also targeting the PKK Kurdish rebel group and the outlawed far-left group, DHKP-C. Davutoglu said those detained included 37 foreign nationals but did not name their home countries.

One DHKP-C suspect, a woman, was killed in a gunfight with police in Istanbul, Anadolu reported.

The agency said those detained in Istanbul included Halis Bayuncuk, an alleged ISIS cell leader in the city who is suspected of having helped recruit supporters. Anadolu said Bayuncuk was previously arrested over alleged al Qaeda links and wrote articles for ISIS publications.

In the last six months more than 500 people suspected of working with ISIS in Turkey have been detained, officials say.