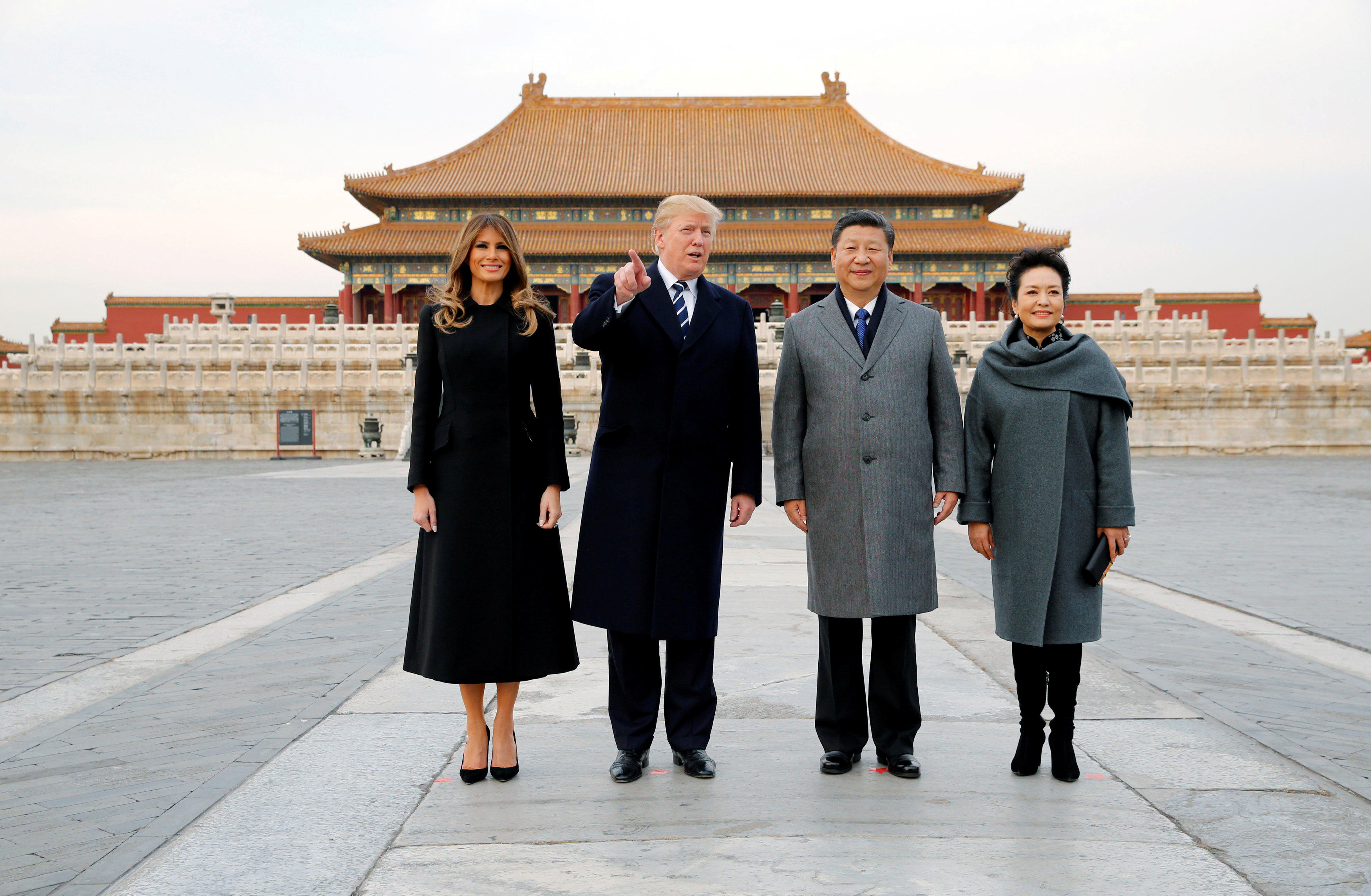 BEIJING -- President Donald Trump will push China on trade and North Korea during a two-day visit in which he will cajole, flatter and scold the rising Asian power.

White House aides view Mr. Trump's visit as the centerpiece of his lengthy Asia tour. Mr. Trump, who is mired in consistently low approval ratings at home, will encounter newly emboldened Chinese President Xi Jinping, who recently consolidated power in his country, while Mr. Trump's every utterance will be studied by allies anxious to see if his inward-looking "America First" mantra could cede power in the region to China.

"You cannot support, you cannot supply, you cannot accept," he said, calling on "every nation, including China and Russia," to fully implement recent U.N. Security Council resolutions on North Korea.

Mr. Trump is expected to demand that China further cut trade with Pyongyang and expel North Korean workers. Mr. Trump has praised China for taking some steps against Pyongyang but urged them to do more, as administration officials believe the border between China and North Korea remains a trade corridor.

"I want to just say that President Xi -- where we will be tomorrow, China -- has been very helpful. We'll find out how helpful soon," Mr. Trump said Tuesday night in Seoul. "But he really has been very, very helpful. So China is out trying very hard to solve the problem with North Korea."

As CBS News correspondent Ben Tracy reports, nearly all of China's trade with North Korea flows through the Chinese city of Dandong, just a half mile across a river from the Hermit Kingdom.

Tracy and his team watched as trucks loaded with goods passed over the single-lane bridge spanning the Yalu River.

Chinese tourists flock to Dandong to catch a glimpse of their notorious neighbor to the north. Journalists, CBS News quickly found out, are less welcome. Just 10 minutes after Tracy and his team arrived on a street lined with North Korean businesses in Dandong, they we were stopped by Chinese police.

The police deleted CBS News' video of goods being sent to the North, so Tracy's team used an iPhone to shoot video from a building nearby, from which we could see what appeared to be construction materials and heavy machinery heading toward the bridge over the Yalu.

It's often difficult to say exactly what is being moved between China and North Korea in the trucks. The Chinese government insists it is strictly enforcing all United Nations sanctions, which now include a ban on North Korea's lucrative exports of coal, iron, and textiles.

But as Tracy reports, China refuses to cut North Korea off at the knees, because it fears if the Kim regime collapses, refugees from the North will stream across the border into China. Worse yet, China worries it would see the U.S. military just across the Yalu River.

The White House is banking on Mr. Trump's personal rapport with Xi to drive the negotiations.

Mr. Trump has frequently showered praise on Xi, who recently became the nation's most powerful leader in decades, including with a trip to Mr. Trump's Florida estate for a summit.

"He's a powerful man. I happen to think he's a very good person. Now with that being said, he represents China, I represent the U.S.A., so, you know, there's going to always be conflict," Mr. Trump recently told the Fox Business Network. "People say we have the best relationship of any president-president, because he's called president also. Now some people might call him the king of China. But he's called president."

The president and first lady Melania Trump were greeted at the airport by dozens of children who waved U.S. and Chinese flags and jumped up and down. They sipped tea with Xi and his wife, Peng Liyuan, received a private tour of the Forbidden City, Beijing's ancient imperial palace, including a performance by young opera students before dinner. Trump said afterward that he's "having a great time" in China.

White House officials point to the summit in Florida this spring, an event partly defined by Mr. Trump telling his Chinese counterpart about the missile strike he ordered on Syria while the two men dined on chocolate cake. But experts in the region suggest that Xi may be playing Mr. Trump.

"Trump keeps portraying his relationship with Xi as great pals but that's wildly naive," said Mike Chinoy, an expert on East Asia policy at the U.S.-China Institute at the University of Southern California. "The Chinese have figured out how to play Trump: flatter him. And there's nothing the Chinese do better than wow foreign diplomats."

Mr. Trump talked tough during his campaign about fixing American's trade relationship with China and labeling it a "currency manipulator." But he has signaled that he would take it easy on Beijing if it will help with the nuclear threat from North Korea.

"Trump has mortgaged the whole U.S.-China relationship to get the Chinese on board with the North Korea plan," Chinoy said. "He is now coming at it from a position of weakness."

White House officials have said that if Mr. Trump were to chide Xi about human rights or democratic reforms he would likely do it privately. Andrew Nathan, a political science professor and China expert at Columbia University, said Mr. Trump's "infatuation" with Xi was reminiscent of former Secretary of State Henry Kissinger's fascination with Zhou Enlai, the first Premier of the People's Republic of China.

"For Trump, Xi is wish fulfillment: 'I wish I could be as powerful as that guy!'" Nathan said.

One uncertainty for Mr. Trump: whether he will be able to use Twitter in China, which has banned the social media platform. Though the United States could enable it to work, the White House declined to comment on whether Mr. Trump would tweet from China.

President Trump arrived in Beijing after two days in Seoul, where he largely avoided the inflammatory rhetoric -- like dubbing North Korean dictator Kim Jong Un "Little Rocket Man" -- that has defined his approach to Pyongyang. But he also warned North Korea in his speech to "not underestimate us. And do not try us."

He also sounded an optimistic note while in South Korea, saying confidently, if vaguely, that "ultimately, it'll all work out" while shifting views and expressing hope that diplomacy could resolve the tensions. Trump also underlined U.S. military options, noting that three aircraft carrier groups and a nuclear submarine had been deployed to the region.

But he said "we hope to God we never have to use" the arsenal.

One hoped-for message to Pyongyang went unsent. Though the White House had previously indicated that Trump would not visit the heavily fortified demilitarized zone separating North and South Korea, plans had been in the works for him to make an unannounced visit Wednesday morning.

Trump boarded the Marine One helicopter and flew to within five minutes of the DMZ when U.S. military pilots and Secret Service agents determined the fog was too thick to safely land. The helicopter returned to Seoul and Trump waited nearly an hour for the weather to clear.

The fog did not lift in time.