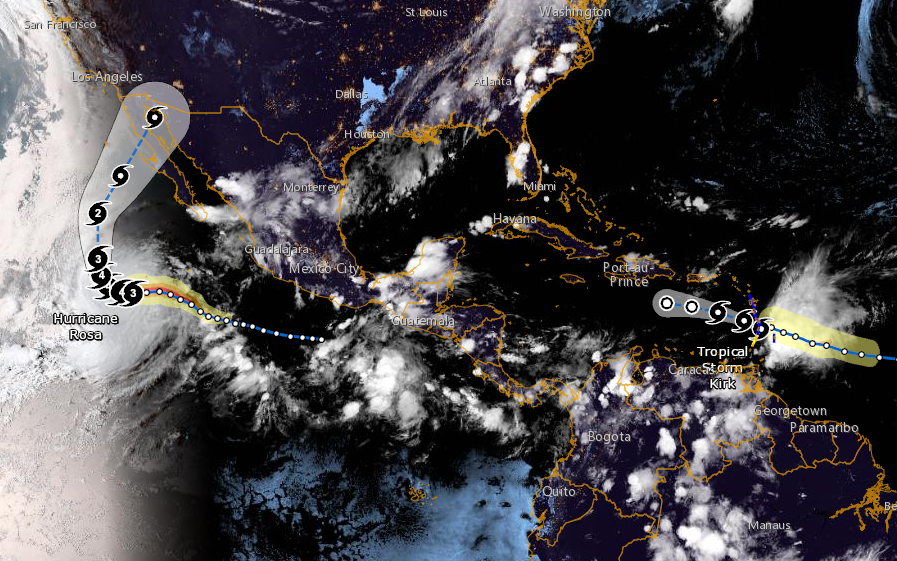 Tropical Storm Kirk dropped heavy rain and unleashed flooding as it passed through the eastern Caribbean, according to the National Hurricane Center (NHC). The NHC 8 p.m. advisory said Kirk is approaching St. Lucia and heavy showers and thunderstorms are beginning to spread across Barbados.

NHC says Kirk was about 15 miles east of St. Lucia and about 60 miles south-southeast of Martinique. The storm is moving west-northwest at about 14 mph and packs with it maximum sustained winds of 50 mph.

Tropical-storm-force winds extend outward of up to 140 miles primarily to the east of Kirk's center, NHC adds.

Officials in the French Caribbean island of Guadeloupe closed schools Thursday and Friday as a preventive measure.

NHC says Kirk will move across the Lesser Antilles within the tropical storm warning area during the next several hours. Gradual weakening is expected during the next couple of days while the system moves over the eastern Caribbean sea. Kirk is forecast to become a tropical depression Friday night and turn into a trough of low pressure by Sunday.

In Puerto Rico, which was hit by Hurricane Maria last year and is still recovering from the storm, Kirk was expected to bring between 2 and 4 inches of rain to the eastern part of the island.

Forecasters say Hurricane Rosa has quickly turned into a Category 3 off Mexico's Pacific coast, but it's not expected to threaten land before next week. Rosa has maximum sustained winds of 125 mph and was located about 570 miles southwest of the southern tip of the Baja California Peninsula. The hurricane is moving west at about 10 mph and hurricane-force winds extend outward up to 35 miles from the center and tropical-storm-force winds extend outward up to 115 miles.

Hurricane Rosa is expected to weaken Saturday and Sunday. NHC warns that swells generated by Rosa will affect portions of the coasts of southwestern Mexico, the southern Baja California Peninsula and Southern California late this week and over the weekend. These swells are likely to cause life-threatening surf and rip current conditions.

Haitians hope to claim asylum in U.S. after assassination of president
Peter Martinez