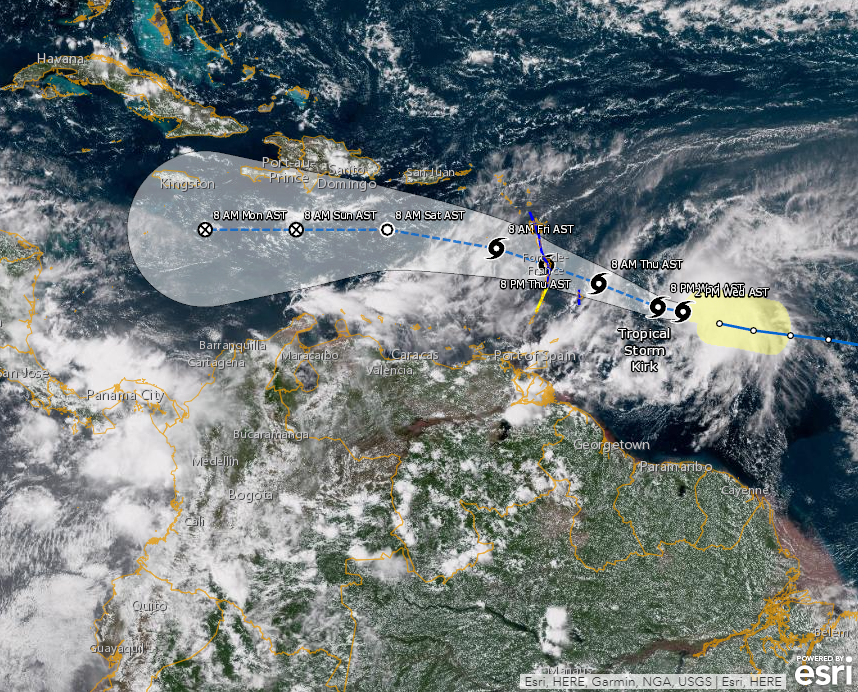 Tropical Storm Kirk, which lost strength and had dissipated earlier this week as it crossed the tropical Atlantic, has strengthened and reemerged Tuesday, according to the National Hurricane Center (NHC) in Miami. Forecasters say little additional change in strength is expected through Thursday and is expected to weaken as it crosses over the eastern Caribbean Sea.

According to the NHC's 5  p.m. EDT advisory, Kirk was located about 260 miles east of Barbados and about 380 miles east-southeast of Martinique, moving west-northwest at about 18 mph. The storm is packing maximum sustained winds of 60 mph with tropical storm-force winds reaching outward up to 115 miles from the center.

NHC's forecast says the center of Kirk will move over the Lesser Antilles by Thursday afternoon.

In the Pacific coast, weather officials are monitoring Hurricane Rosa. Forecasters said it is expected to strengthen but doesn't pose an immediate threat to land.

Meanwhile, record flooding is likely on the South Carolina coast in wake of Hurricane Florence. The NHC said a broad area of low pressure about 300 miles south of Cape Hatteras, North Carolina, was producing showers and thunderstorms on its north side.

Florence made landfall as a Category 1 hurricane Sept. 14 and has since killed at least 47 people across multiple states.

Economic research firm Moody's Analytics estimated that the storm has caused around $44 billion in damage and lost output, one of the 10 costliest hurricanes to hit the U.S. The worst disaster, Hurricane Katrina in 2005, cost $192.2 billion in today's dollars. Last year's Hurricane Harvey cost $133.5 billion.