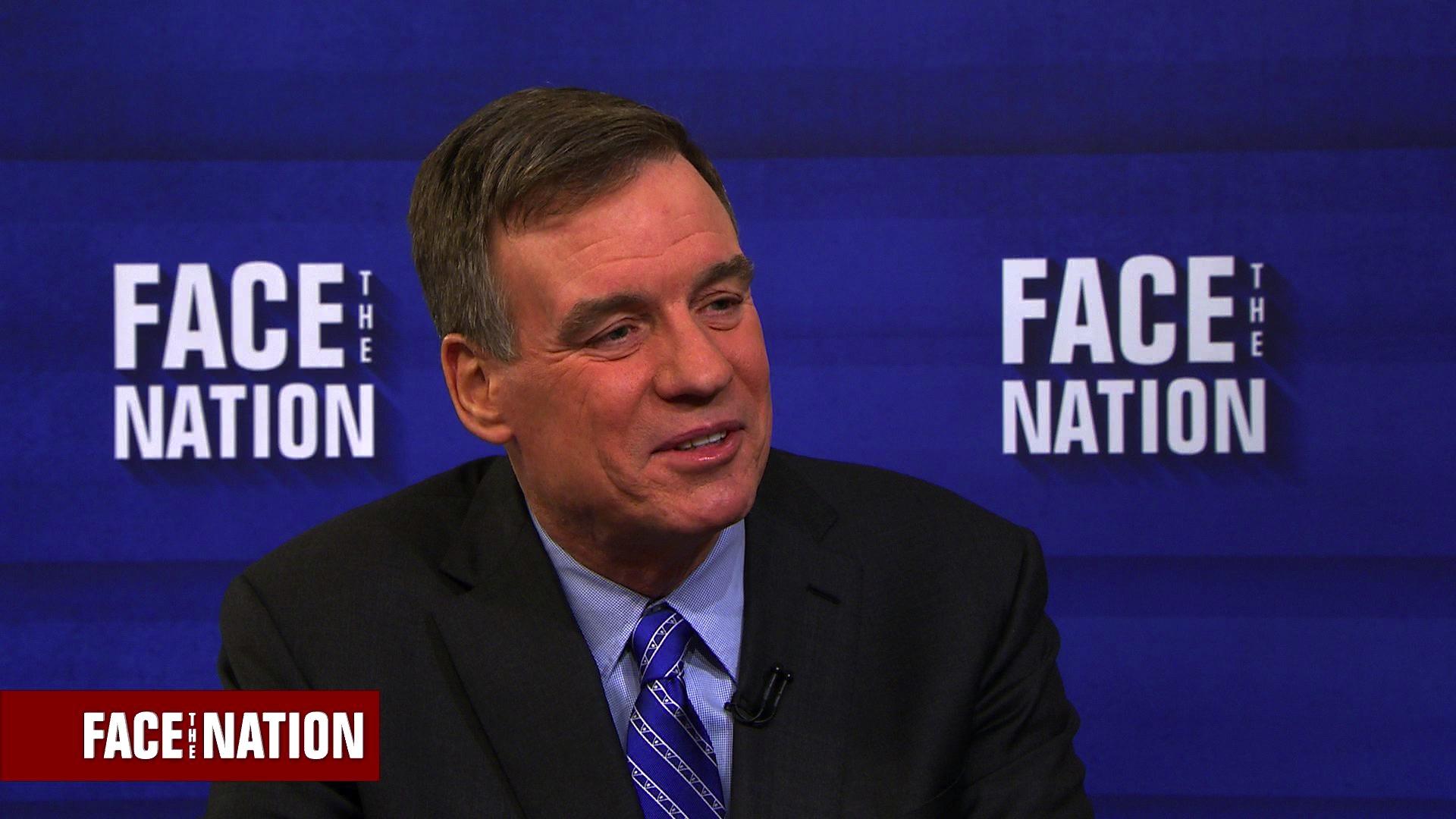 Sen. Mark Warner from Virginia is the top Democrat on the Senate Intelligence Committee. He joined us to discuss the committee's investigation into Russian meddling, the Cambridge Analytica scandal and why he thinks Facebook CEO Mark Zuckerberg should testify before Congress.

The following is a transcript of the interview with Warner that aired Sunday, March 25, 2018, on "Face the Nation."

MARGARET BRENNAN: We begin today with Virginia Senator Mark Warner. He's the top Democrat on the Intelligence Committee. He joins us here. Senator, a lot to talk to you about but I want to speak first about this march on Washington that we saw. The march is over, Congress is on break. You did see tucked into that spending bill this week some tightening of background checks with FIX NICS and some funding for school safety. Is this all we're going to see before November?

SEN. MARK WARNER: I hope not, and there was finally some incremental movement. But in this era of fake news and disinformation to see the genuineness of all those young people, I think this time it's going to be different. I think their demand for sensible gun control, I think we can actually get it done. And I just hope they will keep that energy alive and moving forward. It was, I really think it was democracy in action not just in Washington but all across the country yesterday.

MARGARET BRENNAN: In terms of what can be done, you were one of 16 Democrats who voted against an assault weapons ban in 2013 then in 2014 you voted against a cap on high capacity magazines. They're asking now to restrict those things. Have you changed your position?

SEN. MARK WARNER: I think it's time to change our positions and re-examine. I'd always been in favor of universal background checks particularly after Sandy Hook but I think it's time for us to have a legitimate debate about restrictions on gun magazines and assault weapons. You get into definitions but the basic notion of these weaponized militarized weapons need to be off our streets. And even the Trump administration took some small step this weekend on bump stops - bump stocks. So I think it's time. And I hope these kids continue to press.

MARGARET BRENNAN: What would you recommend to them in terms of where they focus their energy now?

SEN. MARK WARNER: Well I think the fact that they're going to call for a walkout in April is appropriate and I think the most important thing they can do: register and vote. End of the day, that's the way you change democracy.

MARGARET BRENNAN: You have about seven months to go until these congressional elections. You and Homeland Security have been looking into election meddling and they've found that Russian agents targeted voting systems in 21 states ahead of the 2016 election. How do you stop that from happening seven months from now?

SEN. MARK WARNER: Well we are behind and it was remarkable that it took Department of Homeland Security this much time to identify those 21 states. And the thing that bothers me the most-

SEN. MARK WARNER: Well to publicly disclose or even to even - even they took eight months to even tell the actual states. They had this ridiculous excuse that the top election official would not have appropriate security clearances. And what I think is an embarrassment and a bit disgraceful is that this president still has not called out election security, has not told his top law enforcement and top intelligence agents to make this a priority. He clearly didn't raise it on his call with Vladimir Putin where he instead congratulated what John McCain called a dictator and a sham election.

So our committee -- bipartisan people like Martin Heinrich and Kamala Harris, Susan Collins, James Lankford -- we came up with legislation that said let's make sure there's that paper trail after every paper ballot paper trail after every vote. Let's make sure there's better sharing of information and in the spending bill there was about 386 million dollars to help states get their act together because you know we're already in primary seasons.

MARGARET BRENNAN: Will that make a difference in November?

SEN. MARK WARNER: It will make a difference but it will make it even more of a difference if this White House would actually realize this is a national security concern. And what the Russians did in the 2016 elections in terms of sowing dissension weaponizing information has not stopped and in many ways has continued unabated since that time.

MARGARET BRENNAN: This week Facebook revealed that Russian propaganda group created about 500 fake accounts running ads around the election and spent about a hundred thousand dollars on divisive ads. Can you possibly legislate a fix to prevent that kind of thing from happening again?

SEN. MARK WARNER: Well first of all Facebook unfortunately and all the social media companies were really slow to respond. I called this out in December of 2016 and at first they kind of blew me off and others off who are raising these issues.

SEN. MARK WARNER: The truth is it's not just the paid ads. That's a small piece. It's the fake accounts that literally touched close to 145 million Americans. And that's just with fake accounts the next wave of technology will be able to have your image with words coming out of your mouth that may not be said or your face put on somebody else's body in terms of next wave of technology.

So we have to get our arms around this and I think Mr. Zuckerberg needs to come and testify before Congress, not just put an advertisement in the newspaper. He said he would if he was the guy, he is the right guy. He can't send a staff. When I'm called upon on an issue it's my name on the door. I mean you wouldn't take a staff member here on on your show representing me. He needs to come testify before Congress and explain how they're going to work with us to both protect privacy; there are 50 million Facebook accounts that were used by this sketchy firm, Cambridge Analytica, and how we're going to make sure it doesn't happen again in terms of weaponization of these social media platforms.

MARGARET BRENNAN: And with Cambridge Analytica what you're talking about there is this firm that sort of scraped some of this data that people didn't know their their personal information was going to be used or manipulated in the process. Steve Bannon, former White House strategist, also served at one time on the board I believe at Cambridge Analytica. He says he knew nothing about the Facebook mining. Is that a credible denial to you?

SEN. MARK WARNER: I would like to, I would love to have that kind of interview with Steve Bannon. I'm not sure-

MARGARET BRENNAN: Do you plan to?

SEN. MARK WARNER: We hope to. Yes we do. And what we know about Cambridge Analytica-

SEN. MARK WARNER: Well we raised the question of microtargeting and Cambridge Analytica as early as March of 17. There's something a little fishy about this firm and we now know that the CEO reached out to Julian Assange, the famous WikiLeaks leader, about hacked emails. We know that this country- this company reported to work with a Russian oil company who was looking about election data in America.

The big question is, Cambridge Analytica, who bragged about how much they helped the Trump campaign microtargeting. Were they just helping the Trump campaign? Were they utilizing some of the Russian misinformation and disinformation? There are legitimate questions that need to be answered. Again, a reason why our investigation needs to continue and why the Mueller investigation needs to continue.

MARGARET BRENNAN: Senator Warner, thank you for your time.