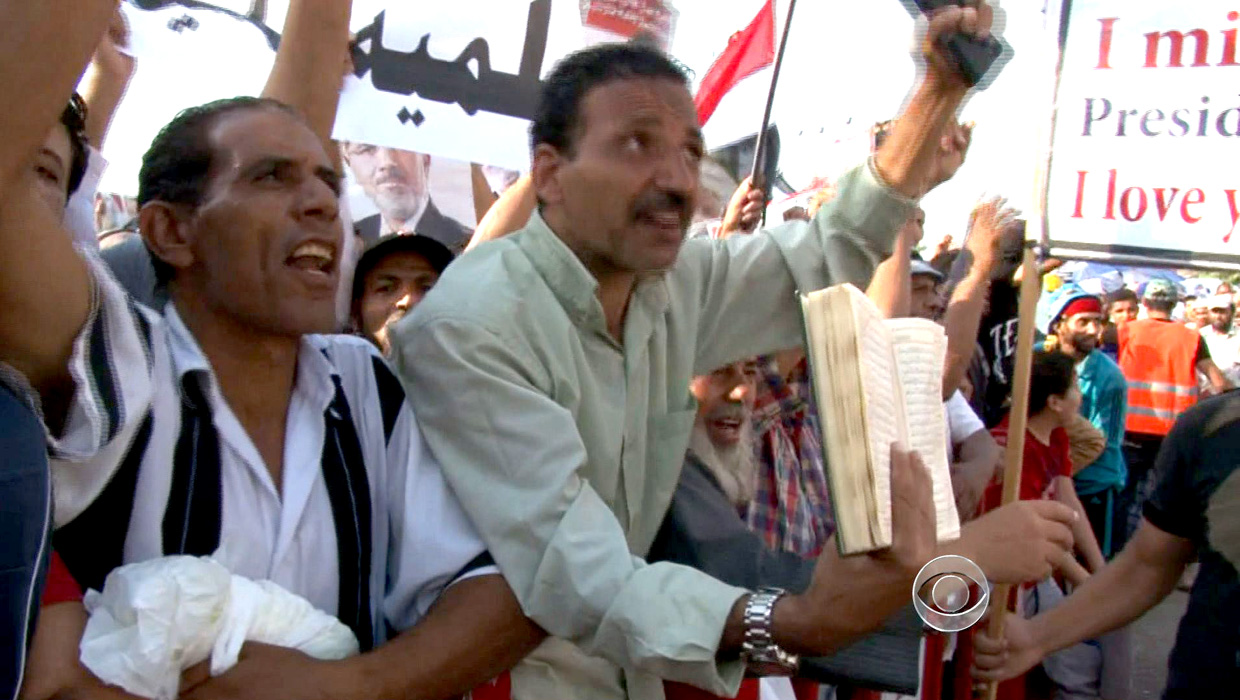 (CBS News) CAIRO -- There's increasing concern that the crisis in Egypt is getting out of control.

Protests over the military takeover have been growing. Over the weekend, there was a mass killing of demonstrators -- and a new showdown may be brewing.

In Cairo, now all eyes are on a protest camp outside the Raba'a al Adawiya mosque, where supporters of ousted President Mohammed Morsi continue to defy the governments' demands that they leave.

At least 70 protesters were gunned down outside the camp over the weekend in the single deadliest incident since Morsi's ouster on July 3.

Kerry: Egypt must "step back from the brink"
Egypt: Coup or not a coup?

But senior government adviser Dr. Mustafa Higazy said that Egypt is now fighting a war against what he called terrorism. He told CBS News that people in Egypt now equate supporters of the Muslim Brotherhood with terrorists.

When asked if government security forces opening fire on protesters could be considered terrorism, he responded, "We cannot deny that we have some sort of incident that must be investigated, this incident could include or involve some sort of police excessive use of force."

The government claims that it has tried to negotiate with the Muslim Brotherhood, but with arrest warrants out for the group's top leaders, the prospects are bleak.

The Muslim Brotherhood leadership is hiding in tents and buildings across a compound where protesters are staying, which means that these people who are camped out here are not just protestors -- they're effectively human shields.

If security forces decide to arrest those leaders, they will have to get past the thousands of people surrounding them.

"We're not going to back down, we're not allow ourselves to live again in a police state, being intimidated, being tortured and being just detained for whatever reason," said Mohammed Okda, formerly a consultant for Morsi's government.

He said he believes that "a lot of people here are willing to die" for the cause.

Statements from security forces seem to indicate that it's a matter of days, not weeks, before tensions will lead to bigger physical confrontations. Meanwhile, the Muslim Brotherhood has called for another round of big protests Tuesday. It's worth remembering that the last time there were big protests, more than 70 people were dead by the next day -- so a lot of people in Cairo are nervous.