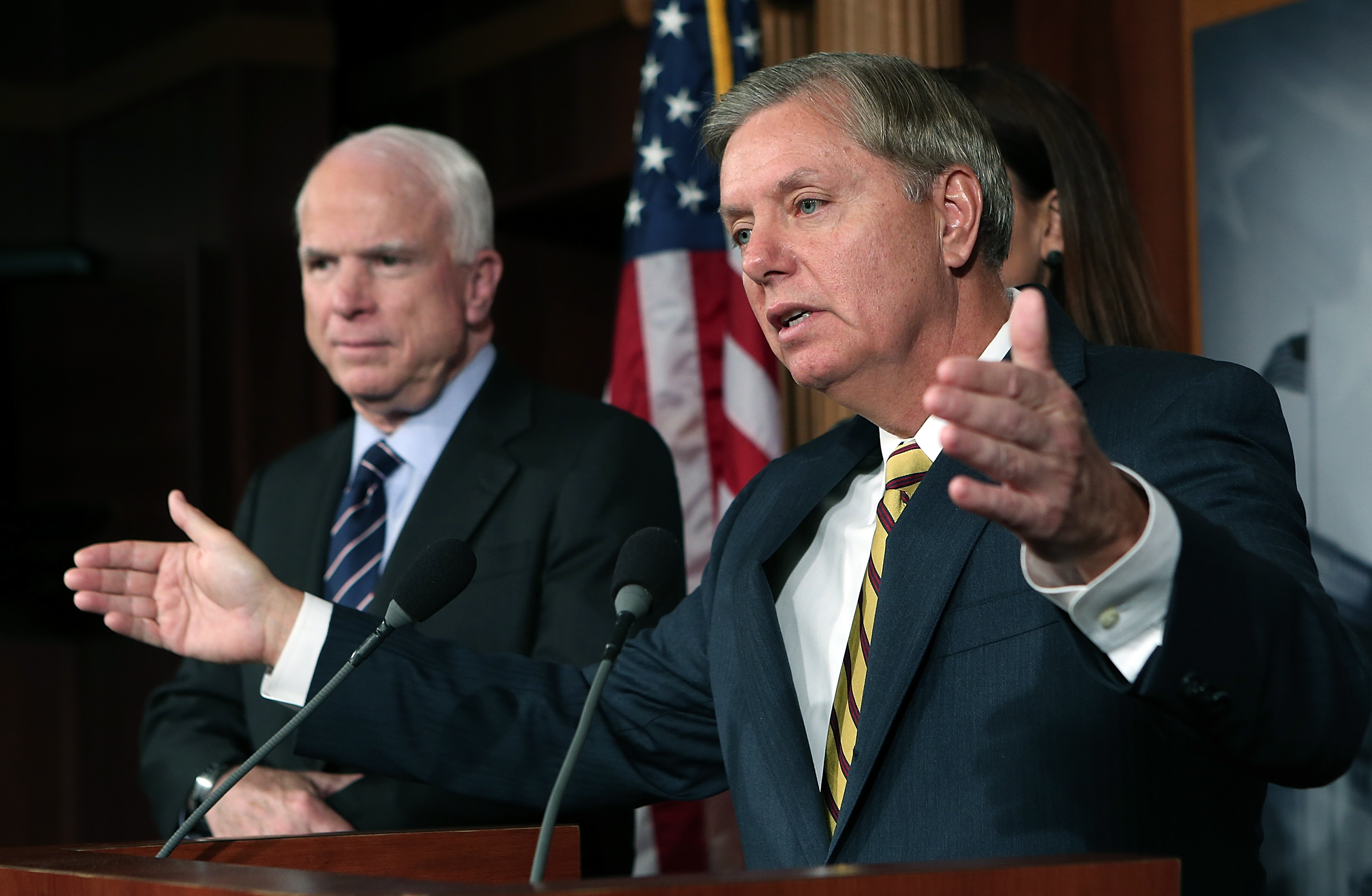 WASHINGTON Republican Sens. Lindsey Graham and John McCain have been asked by President Barack Obama to travel to Egypt next week to urge the military to move ahead on new elections, the senators said Tuesday.

Egypt has been roiled by deadly protests since President Mohammed Morsi was toppled in a military coup on July 3, developments that have threatened the $1.5 billion in annual U.S. military and economic aid to the Arab world's most populous country. Responding to reporters' questions Tuesday about an attempt to cut off the aid, Graham offered up word that Obama has sought the help of the two lawmakers.

"The president asked Sen. McCain and myself to go to Egypt next week, so we're trying to find a way to get there," Graham said. "So we can go over and reinforce in a bipartisan fashion the message that we have to move to civilian control, that the military is going to have to, you know, allow the country to have new elections and move toward an inclusive, democratic approach."

Graham told CBS News that he and McCain were going to Egypt "to talk to the military and the political leaders, hopefully including the Muslim Brotherhood, to have a unified message that we want Egypt to be successful and you cannot stop the progress and the march for democracy that the military has to turn over as fast as possible control to a civilian government."

"The days of supporting friendly dictators or military regimes are behind us, the Arab spring is real. I'm glad the president asked. We'll try to deliver a bipartisan message. We'll try to bring out the best in the future in Egypt before it's too late."

Graham said the two senators were trying to work out the logistics of the trip at the same time Congress was scheduled to begin its summer recess. The South Carolina senator said the goal was to deliver a unified message that "jailing the opposition is more and more like a coup."

Last week, the Obama administration told lawmakers that it won't declare Egypt's government overthrow a coup, which would prompt the automatic suspension of American assistance programs under U.S. law. The administration fears that halting such funding could imperil programs that help to secure Israel's border and fight weapons smuggling into the Hamas-controlled Gaza Strip.

The White House declined to comment about a possible trip.

Sen. Rand Paul, R-Ky., is pushing for a Senate vote on his bill to cut off aid to Egypt. Graham said a vote now could send the wrong signal.

"If you cut off aid, that's a destabilizing event," Graham said, while a vote for aid would "give people the impression everything's fine."

Graham said the trip first came up at the July 17 White House meeting in which the two senators met with the president.

Asked whether the Paul bill might pass, Sen. Bob Corker of Tennessee, the top Republican on the Senate Foreign Relations Committee, said: "I hope not."

"I do agree we need to comply with laws that we have in our country," he told reporters, adding that Congress may change the coup restrictions in September to give the president waiver authority to continue providing aid. "Right now, in the middle of this volatile situation, we need to be a voice of calm."

Sen. Carl Levin, D-Mich., chairman of the Armed Services Committee, has called for halting assistance to Egypt, but he said Paul's proposal was "too extreme."

"I'm in favor of suspension," Levin said. But he would support gradual resumption of aid as the government "lives up to the commitments that they make in the constitution, having a diverse Cabinet, having elections according to the six-month schedule."