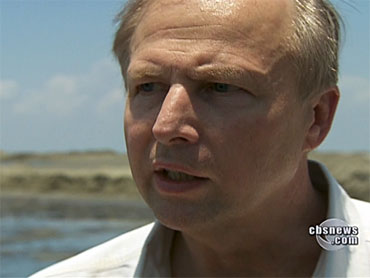 BP CEO Tony Hayward will hand over day-to-day operations involving the oil spill cleanup in the Gulf of Mexico to Bob Dudley, a BP managing director who has helped manage the company's on-the-ground response since May.

The news came in a Sky News interview with BP Chairman Carl-Henric Svanberg.

It was not immediately clear what motivated the change, but Hayward has faced growing criticism for the company's handling of the spill and for comments many considered insensitive. He was grilled by a Congressional committee Thursday about the company's decisions leading up to the April 20 blast on the Deepwater Horizon oil rig that unleashed one of the worst environmental disasters in U.S. history.

Svanberg also told Sky News' Jeff Randall that some of Hayward's gaffes have interfered with the company's efforts to limit fallout from the disaster.

"It is clear Tony has made remarks that have upset people," he said.

Hayward appeared Thursday before a House Commerce and Energy Committee panel probing the causes of the explosion that killed 11 and resulting spill. Lawmakers said his responses to questions seemed to come from a script passed along by attorneys - he frequently said he was not a party to important decisions and that the company would conduct its own investigation -and described him as "evasive."

Rep. Henry Waxman, D-Calif., told the BP executive that in his committee's review of 30,000 items, there was "not a single e-mail or document that you paid even the slightest attention to the dangers at this well."

Hayward's testimony was initially interrupted by a female protester with what appeared to be oil smeared on her hands and face who yelled, in part, "you need to be charged with a crime."

Before beginning his own testimony, Hayward was buffeted by scathing criticism from lawmakers from both parties for more than an hour.

Rep. Bruce Braley, D-Iowa, played a heard-wrenching video from a committee session on the Gulf Coast in which two widows whose husbands were killed in the Deepwater Horizon rig explosion suggested that GP had put profits before safety. "These are now widows with small children to take care of, and they are the symbols and the faces of this disaster," Braley said.

Rep. Joe Barton of Texas, the senior Republican on the Energy and Commerce Committee, said he agreed with the call of Democrats on the panel for answers. But Barton accused the White House of conducting a "$20 billion shakedown" by requiring oil giant BP to establish a fund to compensate those hurt by the Gulf Coast oil spill.

"I'm ashamed of what happened in the White House" on Wednesday, Barton said.

But Rep. Ed Markey disagreed, saying it was "not a slush fund, not a shakedown. ... It was the government of the United States working to protect the most vulnerable citizens that we have in our country right now, the residents of the Gulf."

"It's BP's spill," the Massachusetts Democrat said, "but it is America's ocean, and it is America's citizens who are being harmed. ... No, this is not a shakedown of the company."

Residents and business owners along the Gulf Coast here were hoping to hear some real answers from Hayward Thursday, CBS News Correspondent Don Teague reported. But, like members of Congress, most coastal residents were angry and frustrated.

"He's not answering nobody's question," said Dodie Vegas. "He's just going around and around with every question that he can. I don't think any of them has gotten a straight answer yet."

Across the island, seafood wholesaler Dean Blanchard was even more blunt.

"I know he's gonna lie because he has to open his mouth to talk, and everything that's been coming out of his mouth so far has been a lie," Blanchard said.

Rep. Michael Burgess, a Texas Republican, said that BP "appears to have taken their eye off the ball." Rep. Marsha Blackburn, R-Tenn, told Hayward "BP has not learned from previous mistakes."

Some of the sharpest criticism came from Rep. Bart Stupak, D-Mich. "We are not small people. But we wish to get our lives back," he told Hayward. "I'm sure you'll get your life back, and with a golden parachute to England."

It was a reference to Hayward's much-criticized earlier remark that some day he hoped to get "my life back" and to comments on the White House driveway on Wednesday by BP Chairman Carl-Henric Svanberg that "we care about the small people" of the Gulf Coast.

Hayward received $4.7 million in 2009 in total salary, performance bonus and other non-cash compensation, roughly 27 percent higher than the $3.7 million he received a year earlier, according to an AP review of filings available on BP's Web site

Sky News also reported Friday on BP's plans to $20 billion escrow account it agreed to set up for compensating victims.

BP agreed Wednesday to set up the fund, which will be administered by dispute resolution expert Ken Feinberg. On Thursday it said it would set aside earnings from U.S. operations and sell off at least $10 billion in none-core assets.

Now the company has hired a team of advisers to assist in the sales Sky News' Mark Kleinman reported Friday.

BP's moves to raise cash could far exceed the $10 billion in asset sales it has already discussed. In addition to the $20 billion compensation fund, it is expected to face billions more in cleanup costs and legal liabilities.

The company said earlier this week that it would suspend the payment of stock dividends this year.