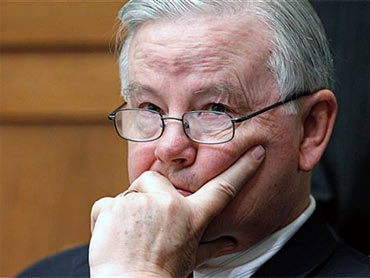 BP CEO Tony Hayward is in the midst of a harsh grilling today on Capitol Hill, where he is testifying House Committee on Energy and Commerce hearing on "The Role of BP in the Deepwater Horizon Explosion and Oil Spill."

But not long after the hearing began, Hayward got something not many expected from lawmakers: An apology.

Rep. Joe Barton of Texas, the top Republican on the committee, apologized to Hayward for what he described as a "shakedown" at the White House yesterday. He was referring to the deal worked out between the Obama administration and BP to set up a $20 billion fund administered by a third party to pay for damages from the catastrophic oil spill in the Gulf of Mexico.

"I'm ashamed of what happened in the White House yesterday," Barton said. "I think it is a tragedy of the first proportion that a private corporation can be subjected to what I would characterize as a shakedown, in this case, a $20 billion shakedown."

He complained that "the attorney general of the United States, who is legitimately conducting a criminal investigation and has every right to do so to protect the interests of the American people, [is] participating in what amounts to a $20 billion slush fund that's unprecedented in our nation's history, that's got no legal standing, and which sets, I think, a terrible precedent for the future."

"I apologize," Barton told Hayward. "I do not want to live in a country where any time a citizen or a corporation does something that is legitimately wrong is subject to some sort of political pressure that is -- again, in my words, amounts to a shakedown. So I apologize."

"I'm speaking now totally for myself," he noted. "I'm not speaking for the Republican Party." House Republican Leader John Boehner (R-OH) later said he disagreed with Barton's characterization, and GOP leaders put out a statement calling his comments "wrong."

Not long after Barton spoke, the White House released a statement calling his comments "shameful."

"What is shameful is that Joe Barton seems to have more concern for big corporations that caused this disaster than the fishermen, small business owners and communities whose lives have been devastated by the destruction," said Press Secretary Robert Gibbs. "Congressman Barton may think that a fund to compensate these Americans is a 'tragedy', but most Americans know that the real tragedy is what the men and women of the Gulf Coast are going through right now. Members from both parties should repudiate his comments."

Rep. Jeff Miller, a Florida Republican, has called for Barton to resign as the ranking Republican on the committee, Politico reports.

"I condemn Mr. Barton's statement," Miller said. "Mr. Barton's remarks are out of touch with this tragedy and I feel his comments call into question his judgment and ability to serve in a leadership on the Energy and Commerce Committee."

According to the Associated Press, Barton has taken more than $100,000 in political contributions from oil and gas interests since the beginning of 2009, more than all but one other member of the House Energy and Commerce Committee.

While questioning Hayward in the afternoon, Barton offered an apology if his earlier comments were "misconstrued."

"If I might take a small point of personal privilege I want to be absolutely clear that I think BP is responsible for this accident, should be held responsible and should in every way do everything possible to make good on the consequences that have resulted from this accident," he said. "And if anything I said this morning has been misconstrued to the opposite effect I want to apologize for that misconstrued misconstruction."

Rep. Ed Markey (D - MA) said at the hearing he "could not disagree more strongly" with Barton's initial comments.

"Not only is the compensation fund that was created yesterday at the White House in an agreement reached between BP and President Obama not a slush fund and not a shakedown, rather it was the government of the United States worked to protect the most vulnerable citizens that we have in this country right now - the residents of the Gulf," he said.

"American citizens are being harmed," Markey added. "We cannot wait, as unfortunately so many victims of the Exxon Valdez had to wait years to see those families compensated. We can't lose sight of fact that the 1984 Bhophal disaster and lawsuits related to it, were only settled last week. We have to make sure American citizens are protected."

"The families of the Gulf will be crushed financially unless this compensation fund is put in place," said Markey, arguing that the history of Gulf families will be "permanently altered" without action.

Markey added that the creation of the fund reflected "American government working at its best" to ensure that families do not become "roadkill" as a result of corporate practices.

As Markey spoke, Barton leaned back in his chair reading what appeared to be the newspaper Investor's Business Daily.