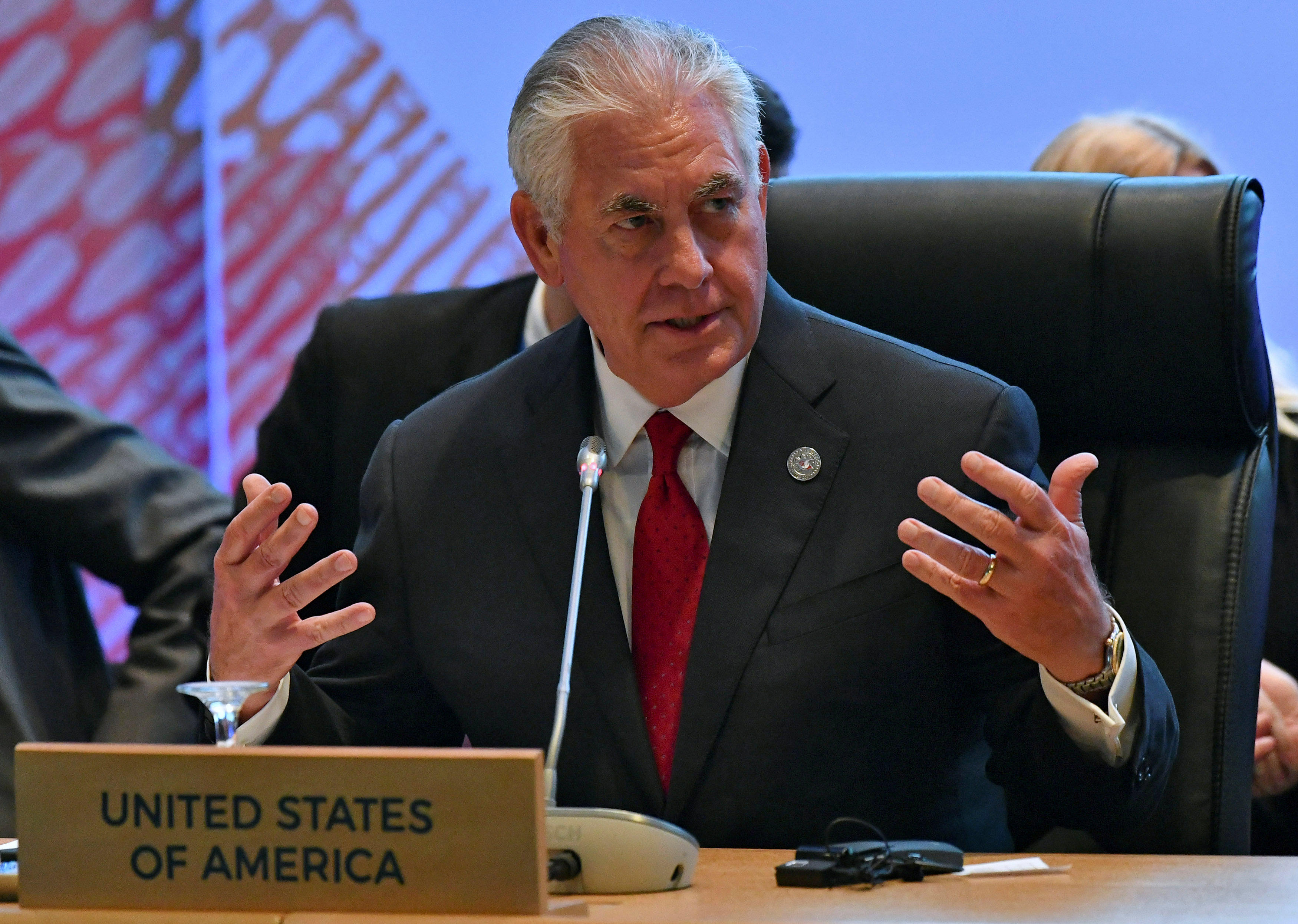 MANILA, Philippines -- Hours after the United Nations Security Council voted to adopt fresh sanctions against North Korea, U.S. Secretary of State Rex Tillerson attended a meeting of Southeast Asian countries and their partners Sunday -- and discussions of the regime's destabilizing nuclear and missile activity were front and center.

Tillerson called the new U.N. sanctions a "good outcome" as he embarked on his first day at the Association of Southeast Asian Nations (ASEAN) ministerial meeting. While his North Korean counterpart is in attendance, Tillerson will not meet with him during the summit, according to a U.S. State Department official.

The sanctions, the strongest U.N. action taken against the regime in a decade, are in retaliation for the regime's two intercontinental ballistic missile tests in July. North Korea is now banned from exporting all iron, lead and seafood. The U.N. says the measures will cost North Korea over $1 billion a year in hard currency.

Susan Thornton, the top U.S. diplomat for Asia who is traveling with Tillerson in Manila, described the Chinese as "helpful and instrumental" in drafting the U.N. sanctions. This is a "good step" that shows the Chinese are serious and recognize the gravity, she said.

Recent tensions between the U.S. and China, however, have emerged as the U.S. has pushed the Asian powerhouse to do more when it comes to North Korea and China has come up empty-handed.

"I am very disappointed in China. Our foolish past leaders have allowed them to make hundreds of billions of dollars a year in trade, yet... they do NOTHING for us with North Korea, just talk. We will no longer allow this to continue. China could easily solve this problem!" Mr. Trump tweeted last week.

On Sunday, however, China urged North Korea to stop its nuclear and missile tests. The U.S. embraced the cooperation, although the threat of the U.S. taking unilateral action against Chinese entities remains on the table.

"We want to make sure that China is continuing to implement fully the sanctions regime and that it is a working actively to continue putting pressure on North Korea and not just kind of episodic back and forth that we have seen," Thornton said. "If we see that they are not being implemented then we will again continue to go after those entities ourselves."

Thornton called it "fortuitous" that all of these countries are meeting just after the U.N. has passed sanctions. The U.S. had been pushing to eject North Korea from the meetings, but that did not happen. Still, the U.S. is pushing for this action in the future.

On the sidelines of Tillerson's first day at the conference, he met with counterparts from China, Russia, South Korea and Myanmar.

"We had an intensive conversation, China urges North Korea to remain calm in dealing with the recent decision given by the U.N. Security Council," the Chinese minister said. He warned the country not to "provoke the international society's goodwill" with a missile launch or nuclear test.

Earlier in the week, Tillerson, once again, spoke about the administration's aspiration to sit down with North Korea. But preconditions remain.

"We're trying to convey to the North Koreans we are not your enemy, we are not your threat, but you are presenting an unacceptable threat to us, and we have to respond," Tillerson said. "We would like to sit and have a dialogue with them about the future that will give them the security they seek and the future economic prosperity for North Korea, but that will then promote economic prosperity throughout Northeast Asia."

North Korea's delegation in Manila has not commented on the new sanctions. Before the U.N.'s adoption of the sanctions resolution, however, a North Korean newspaper said that sanctions or nuclear action would lead to a "sea of fire," according to South Korea's Yonhap News Agency.

"The day the U.S. dares tease our nation with a nuclear rod and sanctions, the mainland U.S. will be catapulted into an unimaginable sea of fire," it wrote. "The more the Trump gang strives to break out of today's quagmire, the more our military and people get aroused, giving more reasons for the (North Korean) republic to own nuclear weapons."

The U.S. has not responded to those words.

There are also other topics expected to be addressed at the ASEAN conference, including intensified terror threats in the region and the dispute over the South China Sea.

In his opening remarks at the conference, Tillerson did not reference North Korea by name. Instead, he sought to solidify U.S. commitment to the region as a whole, in referencing areas of mutual security and economic interests.

The State Department asserts that U.S. remains engaged in the South China Sea dispute and is actively supporting the diplomatic process. Thornton said that the U.S. advocates for players in the region to halt activity, including the militarizing of outposts, in an effort to keep diplomacy's wheels churning.

The U.S. is also actively engaged in combating growing terror threats in the region, namely in the southern Philippines. It is expected to be a topic of conversation when Tillerson meets with Philippine President Rodrigo Duterte on Monday.

On Sunday, Tillerson made a morning visit to the American Cemetery and Memorial in Manila where he took a tour of the grounds and jotted a note in the guestbook.